The Sandpoint Eater: Something Brewing

I just finished unpacking my backroads-dusty car from our annual family gathering in Montana. And thanks to my son-in-law (and new father) John, I brought home quite the selection of left-over beer. John’s a super-serious hobby-brewer in Chicago and his favorite pastime, when traveling, is loading his suitcases with local beers to take home and share with the boys. But for the near future, the only bottles filling his suitcase are loaded with breast milk and the required trappings, and thus I made out like a thirsty bandit.

As hard as John has tried to educate our bunch, there’s a lot I don’t get about his passion for these hoppy-fermented beverages, although my son Zane seems to be catching right on. In fact, according to family beer connoisseurs John and other son in law Russ, Zane has graduated from crap beer to (Coors Light) to craft beer (IPA), and we’ve all learned about the dangers of letting beer go from chilled to warm and chilled again (aka skunked beer).

When we gather for our pilgrimage to Montana, much thought and talk goes into the beer menu, so it’s kind of ironic that our mountain retreat was originally the gold mining camp of Nicholas Kessler, who took his gold fortune and founded Kessler Brewery, in Helena, in 1865.  The brewery operated for more than 90 years (and the mountain retreat is still owned and lovely maintained by his ancestors).

Though I’ve cooked with beer for as long as I can remember (beer bread, barbecued beer-butt chickens, and piled Guinness-grilled onions high atop my favorite steaks), my drink of choice was always wine. I remember many business trips to Portland in the early nineties, that always included a trip with clients, to either BridgePort Brewing or Portland Brewing and I was sure these flash-in -the-pan micro-breweries would be a short-lived fad (there are now nearly a hundred breweries in the Portland metro area).

I admit, I may have been wrong, because now, microbrewers are giving big beer companies a run for their money and market share. In fact, at many fine restaurants, you can even call on the resident cicerone (think beer sommelier), to help you select the perfect beer to pair with your meal.

Thanks to John and Russ, I’ve been tasting my way through not only ambers and ales, and porters and pilsners, but also learning to savor the flavor of meads and sours. Thanks to John, I also know about the not-so-simple basics of beer stemware, including proper pouring and storing of said glassware.  And kudos to the helpful and patient crew at Idaho Pour Authority, where I’ve tasted some great ambers (which isn’t hard to do, given they have 12 rotating craft beers on tap and more than 300 tasty bottles for our drinking pleasure).

My beer palette has certainly matured since my misspent youth in the 70s, when a car load of us would drive from Helena to Coeur d’ Alene to buy the best beer ever (not available in Montana); unpasteurized Coors Banquet beer.  I’m sure there were coolers back then, but for some reason, the guys would load the beer into ice-filled gunny sacks for the return trip to Montana with the coveted Banquet beer. If memory serves me right, a case cost them about five dollars, and they’d resell a couple extra cases for ten, which covered their gas.

We’ve come a long way since those Idaho beer-buying road trips, and the dancing Hamm’s bear and wild Rainer beers. I haven’t had a Coors in 20 years, and I still have lots to learn about craft beers, though I have decidedly found my favorite (not surprisingly, it’s McDuff’s Irish Redhead)!

I still love beer commercials, especially the Budweiser Clydesdales, and my go-to cooking brew will always be Guinness Stout, or Murphy’s, when I’m cooking in Cork. Either will do for this great recipe for caramelized onions that I use all summer long – best BBQ companion ever created for bratwurst, steaks and burgers. Or even just as a companion to Irish Cheddar, for a tasty grilled cheese sandwich.  Cheers.

These onions are so easy and a great accompaniment for all your summer BBQ’s. I especially like them heaped with Irish Cheddar or Gruyere cheese in a grilled cheese on rye.

Watch carefully to avoid scorching while the onions are caramelizing. (Yield 2 cups) 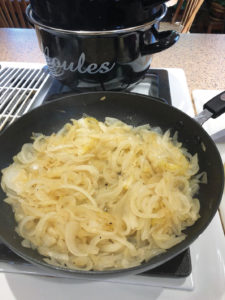 Add onions and fry at medium heat, stirring often, until soft, about 10 minutes.

Add Guinness and bring to a boil; reduce the heat to medium-low.  Cook uncovered and occasionally stirring until onions are golden and liquid has evaporated.  Approximately 30 minutes.

Pour into non-metal container to cool. Once cooled, cover with airtight lid and refrigerate. Onions will keep well for several days.  Warm up before serving.