An interview with: The Lil Smokies

When it comes to bluegrass music, Missoula five-piece the Lil Smokies are a staple of the region. But when asked, “Why bluegrass?” lead singer, songwriter and dobro player Andy Dunnigan takes a moment to think.

“It’s almost like it picked us,” he said. “There’s a definitely a community in this music. It’s sort of how (our band) met each other.” 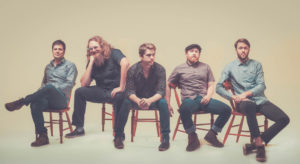 Since forming the Lil Smokies, the band has taken the western bluegrass scene by storm, even having visited Sandpoint a number of times over the last couple years. They’ve played both the Hive and the Panida, Dunnigan said.

“Both those experiences have been incredible,” he said. “The Panida has its own unique feel. It’s got a listening environment — I remember that show being intimate.”

Prepare for another intimate jam session on Thursday, Aug. 30 as the Lil Smokies take the Panida stage again on a night hosted by Mattox Farm Productions.

The Lil Smokies define themselves as a “progressive bluegrass” group. What that means, exactly, is up to the listener’s interpretation, Dunnigan said.

“I would just have to encourage people to come out to show and define it yourself,” he said. “Everyone in the band at a certain moment in their life dove into traditional bluegrass … (but) we’ve sort of pushed the boundaries a little bit.”

The band is Scott Parker on bass, Jake Simpson on fiddle, Matt Rieger on guitar, Matt Cornette on banjo and Dunnigan on dobro. On the surface, their bluegrass-y vibes are strong. But to hear them play live is a testament to the “progressive” nature of their style. Dunnigan said they’re going for a “rock show” feel in their live performances.

Part of that stems from the band’s humble beginnings, according to Dunnigan. He said the Lil Smokies used to play a lot of ‘80s and ‘90s rock covers at their bar gigs, giving the songs a bluegrass twist. He said audiences resonated with the covers. As a result, he hopes the band can release an EP of four or five of their favorite covers sometime over the next year while they continue compiling their next full-length album of originals.

“You (can) make a cover your own,” Dunnigan said, noting that he enjoys a good cover song when he attends other bands’ shows. “Even if it’s a band with an incredible repertoire of original music — I love when they throw in a well-done cover song.”

So why bluegrass? Aside from the community the music creates, Dunnigan said the genre itself is something he and the rest of the band love.

“We all respect the music so much,” he said. (And) it’s fun for us to be able to take the music to new boundaries and redefine it a little, all while paying homage to the roots.”

“I remember thinking, ‘This could work,’” Talbott said. “That was a fun show … Just seeing how much they love to play their instruments and their music … Being a part of bringing them back to a crowd that I know loves them is just an honor.”

Thanks to good response, Mattox Farm has been able to average a show per month over the last year.

“(The positive response) has really motivated me to push and create events and create the opportunity for people to come to shows,” he said, noting Mattox Farm’s recent participation in SummerFest. “That was a blessing.”

Purchase tickets to the Lil Smokies Aug. 30 show either online at panida.org or mattoxfarm.com, or in person at Eichardt’s, Evan’s Brothers, 7B Grooves or at the door the night of the show. Advance tickets are $16.09, tickets at the door are $18. Doors open at 6 p.m. and openers Moonshine Mountain will start playing at 7.

Mattox Farm Productions is teaming up with the Best Western Edgewater Resort to offer 20 percent of room prices for those attending the show. Use promo code MFP.