Monday’s wildfire story is wind, with 7-13 mph gusts anticipated on a couple of larger area blazes through Tuesday, according to Idaho Panhandle National Forests officials.

The Cougar Fire has reached 5,524 acres, with fire officials reporting “minimal growth” on the east side of the fire, where the blaze is burning hottest.

According to the Monday Cougar Fire news update from IPNF, the fire has remained “moderately active” since Sunday. Fire managers are alert to changing conditions as wind gusts are added to the mix. 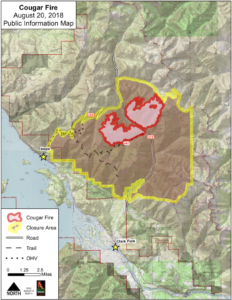 The Cougar Fire as of Monday, Aug. 20. Click to enlarge.

Kootenai National Forest is assisting with fire assessment as the Cougar Fire sustains eastward growth. Structure protection is currently in place for the Keeler Warming Hut and SNOTEL site.

The fire camp for the Cougar Fire was relocated from Hope Elementary School Saturday in preparation for students and teachers to begin the school year. The Bonner County Fairgrounds are now host to the fire camp.

There is an expansive closure area surrounding the Cougar Fire. Find a list of closures on InciWeb, and see the attached map for a visual of the closed area (marked in yellow).

The Surprise Creek Fire, another substantial Panhandle blaze near Lakeview, has grown to 2,305 acres as of Monday morning. Heavy equipment is being used to establish fuel breaks along existing forest roads in the area.

Both the Cougar and Surprise Creek Fires are shrouded in smoke from local and, mostly, regional fires in Washington and Canada. The smoke is making aviation fire fighting tactics difficult, so fire managers are prescribing water and retardant drops as it is safe for personnel.

The smoke is also making its mark on everyone in North Idaho, as air quality levels reached “hazardous” Sunday, according to the Environmental Protection Agency’s air quality tracker, airnow.gov.

On Monday morning, Sandpoint’s Air Quality Index read 163 — classified as “unhealthy.” At 200, conditions reach “very unhealthy.” By 300, which Sandpoint surpassed Sunday afternoon, the air is categorized “hazardous” and people are advised to stay indoors if possible.

The EPA forecasts degraded air quality over the next several days.