All cooks seem to have a few favorite staples, the ones that are omnipresent in the pantry, ready to come to the rescue in a pinch or a jam. Some of us are so afraid of running out of these beloved ingredients, that we find ourselves perpetually picking up a backup jar or package only to find we have already assembled a stockpile.

Mine is cream cheese, and when I return from the market, I usually discover at least two or three 8-ounce bricks in the fridge drawer, so I am merely adding to my prized collection. During the wedding or party season, I’m just as likely to find a 3-pound block from Costco in the “party” fridge in the garage (it’s true, two refrigerators may seem excessive for a single adult).

I am as particular about cream cheese as I am about butter. I loathe the low-fat version. I’m not fond of the whipped variety, nor do I care for the flavored offerings, unless I mix them up myself.

My preferred brand is Philadelphia Cream Cheese, which has been produced for nearly 150 years (clearly invalidating my late mother’s claim that it wasn’t available when I was young). I discovered the foil wrapped cheese in the ’70s while visiting a friend in Seattle. She served an English muffin, slathered in soft cream cheese, topped with strawberry jam and declared it a “Seattle Bagel.” It was so delicious that as soon as I returned home, I bought some and it has been a constant in my kitchen ever since.

I’m not alone in my love of Philadelphia Cream Cheese. The company produces cookbooks and you can find hundreds of recipes on its website. Besides the perfect bagel or banana bread spread, I use cream cheese in countless recipes: cubed and added to scrambled eggs, as a thickening sauce, baked in savory dips and dishes and, of course, my favorite: the venerable New York-style cheesecake. I finally feel like I have mastered the art of cheesecakes after many epic fails, including huge cracks that could compete with the San Andreas fault.

Though I learned early on to carefully fill those great, grand canyons with ganache or fruit fillings, my finished product was never as satisfying as the magazine covers or cookbooks, featuring pictures of decadent cheesecakes with a perfect satiny finish. It took a lot of years of practice to master a cheesecake that could stand alone, unadulterated, in its pure state. For years, my older sister, Patty, was the recipient of my tasty but fruitless attempts at a picture perfect creation. She took her job as a tester seriously (though she later reported packing on a few extra pounds during the testing era).

I tried lots of recipes that also included other rich additions, like Greek yogurt, sour cream or heavy cream. While tasty, they still didn’t add anything to the creaminess or integrity of a crack-free pastry. What I have learned is that less is more with cheesecake: don’t over whip or mix, don’t overcook and always bake in a water bath. I prefer using glass-bottomed springform pans and, though they are harder to find, you can order them from Amazon and the wilton.com website.

My like-a-son, Dougie, recently joined us for our annual summer retreat to Montana. In more than 20 years, I’d never seen him eat a dessert until he sampled the cheesecake I’d brought along. He polished off three pieces and gave it five stars. My quest for cheesecake perfection is now complete. 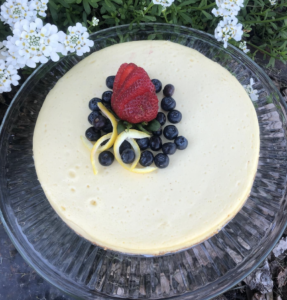 Crust: In a mixing bowl, combine the graham cracker crumbs and melted butter together with a fork, until evenly moistened. Lightly coat the bottom and sides of a 9-inch springform pan with non-stick cooking spray. Firmly press the mixture over the bottom of the pan, use your fingers or the smooth bottom of a glass. Refrigerate the crust while preparing the filling.

Filling: In large bowl or stand-up mixer, beat the cream cheese on low speed for one minute, just until smooth and free of any lumps. Gradually add the sugar and beat until creamy, one to two minutes. Scrape down the sides of the bowl and the beaters. Slowly add the whisked eggs, and continue to slowly beat until combined. Stir in the vanilla and lemon zest. The batter should be thoroughly mixed but do not overbeat (overbeating incorporates too much air and will cause the cake to puff when baking, then fall and crack when cooling).

Pour filling into the crust-lined pan and smooth the top with a spatula. Set the pan on a large piece of aluminum foil and fold up the sides. This will prevent water from seeping into the seams of the springform pan.

Carefully set the cake pan in a larger roasting pan. Pour boiling water into the roasting pan until the water is about halfway up the sides of the cheesecake pan.

Bake in a preheated 325-degree Fahrenheit oven for 45 minutes. The cheesecake should jiggle lightly, and it will firm up after chilling. Be careful not to overcook. Remove from water bath, return to oven. Turn off the oven, leave the door barely ajar and let cheesecake cool there for about an hour.

Loosen the cheesecake from the sides of the pan by running a thin metal spatula around the inside rim. Chill in the refrigerator, loosely covered, for at least four hours to set up. Demold and transfer to a cake plate. Slice the cheesecake with a thin, non-serrated knife that has been dipped in hot water and dry towel between slicing.

Cheesecake can also be wrapped in plastic wrap and frozen, then defrosted in the fridge.