Shingle Mill Blueberry Farm is a festive place this time of year. Toddlers run around stuffing blueberries into their mouths, moms catch up while their babies nap in the shade and, often, three generations pick alongside each other. 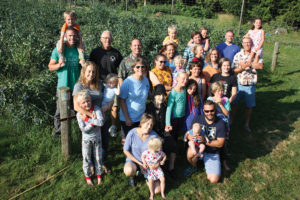 Four generations in the field: from Grandma Bertha, age 97, down to Baby Joseph. The Omodts are surrounded by their eight kids (and their spouses) and 16 grandkids. Photo by Jodi Rawson.

“This time of year makes it all worthwhile,” said farm owner Fred Omodt. There are 5,300 plants on five and a half acres and each plant delivers three to five gallons of berries, so they are beginning to pay off the initial investment.

Starting a blueberry farm was neither easy nor cheap: tons of soil amendment like sulfur and coffee grounds had to be added to the beds to foster high acidity; fencing needed to be bought, along with assorted equipment; and thousands of dollars worth of plants were purchased from Oregon. The Omodts planted six varieties of blueberries in 2010 and, from there, the family’s dream began to take root. Nine years later, the bushes are eye-high and weighted down with berries.

Patty Omodt, a lactation consultant, is a natural teacher who loves to share the details of farming, harvesting and preserving blueberries. Patty and Fred met in college in Missoula, Mont., and they have lived in the Selkirk Valley since 1979. Together, they have eight children and 16 grandchildren.

The Omodt children are teachers, veterans and public employees. One of them was just promoted to lieutenant colonel. Their daughter, Karen Dignan, conducts a local community orchestra and her husband, Ryan Dignan, is the Sandpoint Middle School band teacher, as well as a master percussionist. Family and friends drum and dance, with blue-painted faces and bodies, in a Fourth of July performance (inspired by the Blue Man Group) promoting the opening of their blueberry season.

Arriving at the blueberry farm, it’s usual that one of the Omodt’s 16 grandchildren will greet you. Then you will be told what berry rows are open and to remember to put the berries that have fallen into the “bad berry bucket,” so that the field is not attracting wasps and gophers. You are invited to graze and enjoy the pesticide-free berries, for this is the benefit of u-picking.

“Our u-pickers are interesting and grateful and they come from all over the world,” said Fred.

Shingle Mill Blueberries are also sold at the Farmers’ Market in Sandpoint, Wednesdays and Saturdays. There are around 40 local kids that pick the berries for market.

“They know the rules: no plumber’s crack, no cleavage, no swearing, no throwing berries and every time they enter the field they have to wash their hands for 20 seconds,” said Patty. “This is their first job and we want to create work ethic.”

Ruthie Buday, a local homeschooler entering 6th grade, works alongside her younger brother. Buday smiled radiantly, loving the work and sharing her success — she picks between four and five gallons each morning, for a total of $25-$35 a day. Picking blueberries was my first job also, but I didn’t pick as well as Buday — mostly because I am a blueberry addict!

What the public sees is an absolute success, but there is much work behind the blueberry farm. Pruning is intense and arduous but necessary and rewarding — berries are bigger and more prolific on a well-pruned bush. An expert can prune a bush in a few minutes, but Patty and Fred are quick to admit that they are still learning to be farmers, so they spend upwards of seven minutes per bush — multiply this by 5,300 plants and you begin to understand how the farm humbles the Omodts.

“The work keeps us young,” said Patty, who takes care of grandbabies, her 97-year-old mom and the farm.

Their victorious harvests would not be possible without teachers and mentors along the way.

“I took my mom, the matriarch here, to a number of conferences with me,” said Patty. “I always go to Oregon, which is now the blueberry capital of the Northwest. My mom is a retired dietician and we tested over 55 varieties that could grow in this field, for taste and for use,” Patty went on to explain the benefits of the varieties planted on Shingle Mill: Early Blue, Duke, Blue Crop (the mother of all of the blueberries), Reka (with a potent “huckleberry like” taste), Draper and Liberty.

“I had a question for Dr. Wei [a professor at Oregon State University, and blueberry expert] and I had my mom by the hand. Dr. Wei bowed to my mother and introduced himself to her first, then he grabbed my hand and said, ‘I will be your mentor,’” Patty said, with her hand on her heart and tears in her eyes. Without Dr. Wei’s guidance, the Omodts may not have had the bravery to begin their dream, or the wisdom to sustain it. They depend on his advice to this day.

“A number of us in the area talked about how to preserve this valley,” said Patty. “We don’t want this valley to get all chopped up. We thought if we did something to protect the valley by sustaining our farmland and also drawing in our kids and our grandkids…” this, she explained, was how Shingle Mill Blueberry Farm was born.

“The farm has become a family magnet,” added Fred.

“Maybe when we pass away, these kids will have something to sustain this 25 acres,” Patty said. “Maybe one of them will manage it and it will stay as 25 acres.”

Shingle Mill Blueberry Farm is located on 488 Shingle Mill Road, a few miles northeast of town. They are expecting to stay open through Labor Day Weekend. Get ’em while they’re fresh!