For rockstars, sister-brother duo Jocelyn and Chris Arndt are a couple of “huge dorks.”

Those were Jocelyn’s words, as the pair spoke with the Reader in a recent phone interview. Both are recent Harvard University graduates: Jocelyn with an English degree and Chris with a degree in computer science. Elite academics and rock ’n’ roll don’t often go hand in hand, but the duo doesn’t seem to subscribe to stereotypes. Talking with them while they drove through the Nevada desert, it became quickly apparent: Jocelyn and Chris are huge dorks in the most endearing sense of the term. They laughed and played off one another in conversation, all while sharing what led them to making music.

“We have amazing parents who love amazing music,” Jocelyn said. “We grew up listening to … pretty much everything under the sun. In our house, you can’t have dinner without a CD playing.”

The result of those musical influences is a rock sound heavy on groove and cascading lyrics. Chris is the mind behind the addicting guitar riffs, citing BB King and Pink Floyd as some of his key inspirations. Jocelyn delivers her vocals with an explosiveness and longing reminiscent of Janis Joplin and Lzzy Hale. 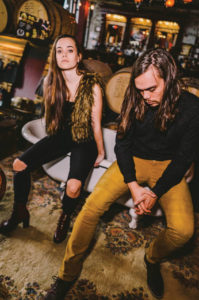 The Arndts, who grew up in a small town an hour west of Albany, New York, take classic rock and strip it down to something more refined. Still, headbanging and air guitar are natural reactions while listening to many of their songs.

The siblings are currently touring to promote their 2019 release, “The Fun in the Fight,” and will bring that tour Wednesday, Aug. 21 to Farmin Park in Sandpoint as part of the free, family-friendly Washington Trust Bank Sandpoint Summer Series of concerts.

“The Fun in the Fight” is the first album the Arndts wrote and recorded while living separately, Jocelyn having already graduated and Chris finishing up his time at Harvard.

“We had to sit with the song ideas for a long time and it created a really interesting sound,” Chris said.

The third track on the album, “Outta My Head,” which the band released as a single, is an example of a song that had plenty of time to evolve. What started as a simple acoustic riff, courtesy of Chris, became something the band’s producer wanted to accentuate. The final product is a steadily building, vivacious track that thrives on the simplicity of the riff and Jocelyn’s animated, sultry voice. Other choice tracks from the album are “Kill in the Cure, ‘’Witness” and “Be That as It May.”

Next week won’t be the first time Sandpoint has heard the Arndts. KPND radio was one of the first stations to support some of the duo’s earliest music.

But there’s no doubt that those in attendance at the Summer Series show will be in for a treat that can’t be translated by radio waves.

“We are of the opinion that recorded music is great, but there is nothing that distills the essence of a band [more] than the live performance,” Chris said. “That’s where it’s at.”