The Sandpoint Eater: Goddess of the garden

Last weekend, the massive mound of crusty snow finally disappeared from my corner lot. The kids refer to it as Mount Mimi (thanks to a snowplow operator who piles the entire block’s worth of snow in my front yard every time he makes a pass down the street). So, with the promise of spring in the air, I cruised my soggy yard and was surprised to find several, bright-green young garlic plants shooting up from one of my raised beds. It was as though I had discovered a goddess in my garden.

Despite last fall’s loud decree (no more vegetable gardening for me), it appears I’ll be eating my words, served with a side of garlic. I barely recall planting the small starts; there is but a faint memory of Ryanne telling me I was growing them all wrong, as they languished in the hot summer sun.

After last summer’s dismal yield, I promised myself: no seeds or seedlings and no starts. I was not even going to purchase Red Wheelbarrow’s tall, handsome tomato plants. I planned to purchase all my garden goods at the summer markets. But finding those beautiful garlic plants in my yard (on my birthday!) had me swooning over all of the possibilities springing forth from the dirt. I love garlic, and lots of it, and I rarely cook without it, save for one particular friend with an allergy (or aversion) to it.

Garlic’s been known for its health and healing qualities for centuries and remains a mythical wonder, curing various disorders that have affected us for centuries. Garlic was even fed to the enslaved Egyptians, giving them added stamina as they labored to build the great pyramids. Thousands of years later, garlic still holds its own as a popular recipe ingredient and favorite health enhancer. Almost everyone loves garlic, evidenced by festivals celebrated throughout the world.

I can still recall my first garlic festival. I was on a three-day, private train layover in Oakland, Calif., and learned of a garlic festival in not-so-far-away Gilroy. When none of my railcar cohorts showed an ounce of interest in attending, I rented a car at Jack London Square and headed south solo.

I knew I was headed in the right direction when, just a couple of miles north of Gilroy, the aroma of garlic permeated the roadside, welcoming me to the revered land of garlic. Touting itself as the garlic capital of the U.S., its festival has been going strong since 1979.

There’s nothing garlic-related you can’t find to buy (or eat) while you’re there. Besides the usual — garlic powder, paste, salt, garlic clove stuffed olives and pickled garlic — you’ll find beautifully braided garlic ropes, and you can even sample chocolate-coated cloves (no thanks).

The one I attended had cooking demonstrations and even a garlic eating competition (no thanks). If you plan to attend a garlic festival, a road trip to Gilroy’s in order and you won’t be disappointed. The 2022 garlic festival is July 22-24 (gilroygarlicfestivalassociation.com).

I’ve seen many techniques for peeling garlic and lots of implements you can try, too. But, from firsthand experience, I can warn you never to soften a head of garlic in the microwave. I once put a head in the microwave for 30 seconds on a friend’s advice. Then I was supposed to wrap it tightly in Saran wrap and after a minute or so, the cloves would pop right out of the softened bulb, but I never got to that step. I must have set the timer for three minutes because we soon experienced a massive explosion of garlic. Massive. The force was so great that it blew the microwave door open, and the entire kitchen (including the ceiling) was covered in micro blobs of stinky, gooey garlic. I can also tell you from experience that there isn’t a candle scent in the world to mask the smell of stinky, burned garlic.

I’ve given up on all the techniques touted by friends and the tools hyped on cooking shows. Instead, I prefer to use the side of a sharp butcher knife and crush the clove with a tremendous forceful whack, then finish removing any skin that remains and mince the skinless clove with the knife blade.

I’m still not fond of peeling garlic when whole cloves are required for a recipe. The best technique I’ve found so far is turning the project over to an unsuspecting guest, who makes the fatal mistake of asking, “Can I help you with anything?”

Garlic doesn’t take long to cook (or burn). It’s done when you begin to get a whiff of its fragrance. I can’t think of a savory dish that’s not better with a little sauted garlic, including shrimp, and after you try the recipe, no doubt you’ll agree.

Garlic shrimp recipe • These shrimp, swimming in fragrant garlicky-butter, can be served over pasta or poured into shallow serving bowls and served with lots of French bread to dunk into the butter. Enjoy with lots of white wine. Makes four servings. 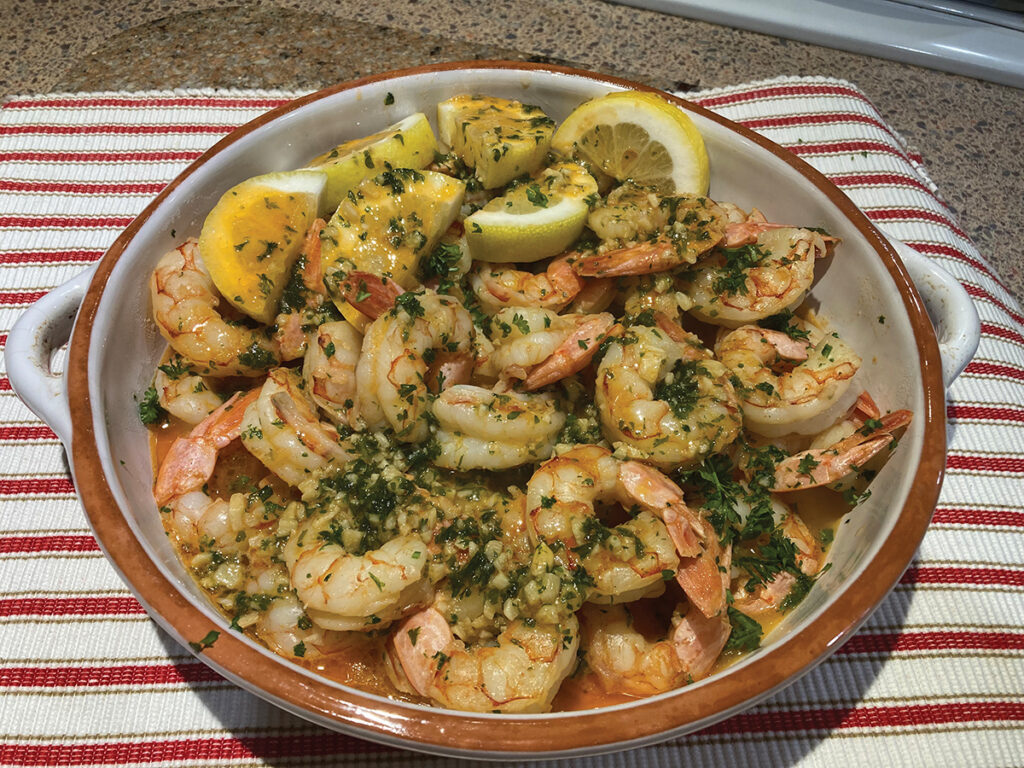 Add garlic to the skillet, stirring frequently, until just fragrant (not browned), about 1 minute. Stir in chicken stock and lemon juice. Bring to a low boil; reduce heat and simmer until reduced by half, about 1-2 minutes. Whisk in wine and remaining butter, a spoonful at a time, until melted and smooth.

Stir in shrimp and gently toss to coat.