June 9 is Children’s Day, and I’ll certainly be doing my part to celebrate children, happily spending the day riding the rails alongside my two oldest grandsons, 12-year-old Zane and 11-year old Alden. If all goes according to plan, after two days, we’ll disembark The Empire Builder in Chicago and let the pair of preteens run off a little steam. After a BBQ and overnight stay with their youngest cousin, Samih, we’ll board the Capital Limited, an overnight train to Washington, D.C. I’m hopeful my energy and funds will hold out for five days of exploring our nation’s capital.

Zane comes from eastern Montana and loves playing and watching football. Though he’s only 12, there’s not a piece of farm equipment that he can’t operate. Alden is a creative artist and mad Lego genius. These cousins have been joined at the hip since they were small. They have floated rivers, built forts, discovered a bear carcass, fished, cooked, camped and found plenty of trouble, without even looking.

For everything they have in common when they’re together, their lives are completely different when they’re apart, so I conspire to bring them together every chance I get. Though both boys rode on trains with me when they were little, this is our first big rail adventure together.

It always feels good to get back on the train. I used to average about 40,000 rail miles a year and still love the feel of the steady, rumbling motion under my feet. I’ll never tire of the train’s horn, blowing long and short warning whistles into the night.

Many years ago, when I operated The Northern Parks Ltd., a luxury passenger train connecting Yellowstone and Glacier National Park, this was my favorite time of year. After months of winter planning and anxious to start the touring season, I’d head to Seattle, where we’d await the arrival of the rolling stock of sleepers, domes and diners. Once the train was built, we’d shop and stock, purveying the train with luxury amenities before the deadhead movement to Sandpoint, where we stabled the train between trips.

The deadhead movement always included the well-heeled owners of the private rail cars, who never missed an opportunity to ride on their private cars and partake in the annual moveable feast between the coast and Sandpoint. I’d spend days planning menus and shopping amongst the vendors at Pike Place Market, a showcase of the finest, edible offerings of the Northwest. And every year the menu was sure to include the grandest catch of the season: Copper River salmon.

There are several species of Copper River Salmon, and my favorite is King, known for its deep red color. Other favorites include Sockeye and Coho, and they all come to us from the wild and rugged Copper River, one of the swiftest rivers in Alaska. Twisting and cutting deeply through the Wrangell and Chugach mountains, it’s a nearly 300 mile stretch of pristine glacier-fed waters, powered by hundreds of rapids.

Salmon season begins in mid-May and runs through September. Kings, prized for their high fat content, rich omega-3s and buttery texture, come first and run through mid-June. Sockeyes run through early August, and Coho run from July until September. The Copper River produces some of the richest, best-tasting wild salmon in the world, and there’s a high demand for the fish, which commands a steep price at the markets (you can expect to pay up to $40 per pound for King).

It’s been several years since I stood in line at Pure Food Fish Market, shelling out a few hundred bucks for plump Copper River Sockeye filets, though I’m still crazy about the coveted first catch. Nowadays it’s on a much smaller scale, so I just head over to the friendly folks at Yokes for a fresh filet or two. There was a time when I felt that I over-prepared this lovely fish. Now, I keep the preparation simple and the cooking time minimal.

Speaking of simple, there will be no mahogany-lined sleepers nor attentive stewards pouring my wine for my next trip, but I have a feeling that the rail journey with Zane and Alden will be an experience of a lifetime. And hopefully we’ll find the perfect Copper River King filet to throw on the grill for our Chicago stopover. Lightly seasoned, grilled to perfection and topped with a sublime butter sauce. Life (and salmon) doesn’t get much better.

This is one of my favorite summer dinners. Just add some crisp greens on the side. 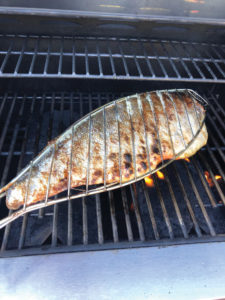 • 1 cup juice from mixture of fresh

• Salt and pepper to taste

Place wine, vinegar, shallots and juice in a small non-reactive saucepan over medium-high heat; bring to a boil. Cook until liquid is reduced to about ¼ cup of liquid, and is slightly thickened.

Remove from heat and whisk in the butter a piece at a time, incorporating before adding more. Return sauce to low heat if necessary, but do not boil. Season to taste with salt and pepper. Stir in herbs  and citrus zest, just before serving.

Remove fillet from fridge, for about 15 minutes, to temper. Season with salt and pepper.

Oil both the grill and fish to prevent sticking.

If using a grill basket ( I recommend), grease it by dabbing a paper towel in some cooking oil and wiping it all over the inside of the basket.  Place fish in basket.

Place the basket over the grill. Grill for about 5-6 minutes. Flip and grill another 4-5 minutes.

Flip onto serving plate and drizzle with citrus sauce.