Gone to the (bird) dogs

The room is dark, the pint glasses are cold and the music — it’s loud.

Every manner of flannel, sneaker and party dress populate the dance floor, spinning and hopping up and down to the thrum of the bass strings. Voices catch the chorus bug and sing along. Open hands rise and fall with the melody, and glasses and cans reach for the sky with each hoot and holler. 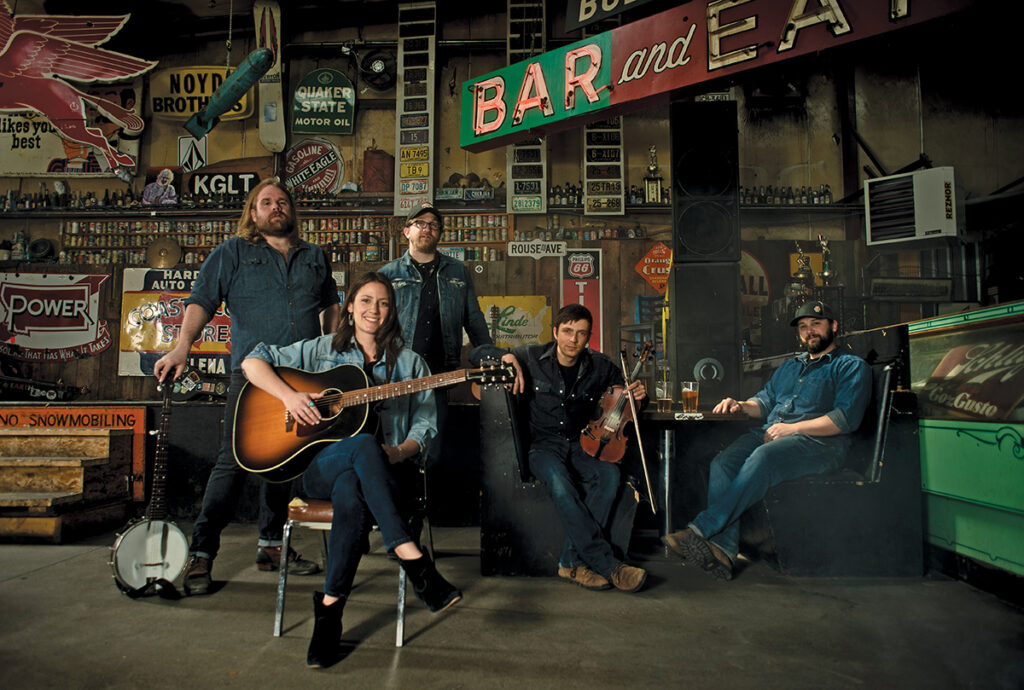 Laney Lou and the Bird Dogs will play the 219 Sunday, April 10. Courtesy photo.

As it is played to the packed room, the music transcends genre and stereotype. It reaches to the core of its listener, and pulls forth an ability to live fully in that moment.

This is the music of Laney Lou and the Bird Dogs — a five-piece string outfit hailing from Bozeman, Mont., which will bring this scene to life at the 219 Lounge on Sunday, April 10 in what is sure to be a sold-out 7 p.m. show.

While there will be no ticket sales or cover charge, the Niner will hand out 94 wristbands starting on Friday, April 8 when the business opens at 11 a.m. The bar will give one wristband per person in an effort to “pack this place with people who really want to be here,” and seating will be limited, so arrive early to obtain accommodations if needed. This also serves as an end-of-ski-season bash, so bring in your Schweitzer season pass to get a free hot dog.

The Reader last caught up with Laney Lou and the Bird Dogs in 2019, and in the time since, the group has seen everything from the highs of growing more popular across the country to the lows of, well, every musician’s worst nightmare coming true: a pandemic.

“We didn’t know when we were going to play next. It was like sitting in purgatory,” Matt Demarais, banjo player and vocalist, told the Reader.

“When we lost our job it was like, not only are we not getting paid, but we love what we do,” he added. “We love traveling, and being on stage. It was like a part of you being taken away.”

Though difficult, Demarais said the impact the pandemic had on live music “galvanized” Laney Lou and the Bird Dogs as a band.

“It made us better, and made us pivot a little bit with what we wanted to sound like and what kind of band we wanted to be,” he said. “Prior to the pandemic, we were a party band … I think we have a little more perspective now.”

The band’s latest album, Through the Smoke, recorded and released in 2021, puts that shift on full display. While live shows remain wildly high energy, full of thumping bass lines and soaring fiddle solos, Through the Smoke showcases refined lyricism and a band leaning into its identity as blue-collar, Western storytellers.

Part of what makes the group’s stories compelling are the multiple voices telling them. Demarais said he, along with guitarists Lena “Laney” Schiffer and Josh Moore, serve as the “three-headed” vocalist “monster” of the group. Along with bassist Ethan Demarais and multi-instrumentalist Brian Kassay on fiddle, mandolin and harmonica, Laney Lou and the Bird Dogs have created what Demarais calls an “alternative grass” sound.

Demarais has always seen himself as a rocker or metalhead rather than a bluegrass man.

“I always loved the idea of having a banjo in a rock band,” he said. “Acoustic instruments playing rock music — I just thought that was so cool.”

When this reporter pointed out that Demarais could, in fact, say that he plays a banjo in a rock band as part of the genre-bending, rock-driven Laney Lou and the Bird Dogs, he laughed.

Listen to Laney Lou and the Bird Dogs and find the band’s social media links at laneylouandthebirddogs.com. The 219 Lounge is located at 219 N. First Ave. in Sandpoint.