The Sandpoint Eater: For the love of feta

I haven’t had a bite of Greek food since a delightful, multi-course lunch last December in Cannes. Greek cuisine is at the top of my food chain, and I eat it every chance I get. For many years, when I made frequent trips to Chicago, I’d choose a night and head to Pegasus, my favorite ethnic restaurant in Chicago’s Greektown. I always started my meal with an icy, cold vodka and hot, fried cheese, saganaki. The cheese was set ablaze and ceremoniously served as the waiter shouted, “Opa!”

On several trips, as I headed home, I’d take a detour on my way to the airport to stop at Jerry’s Fruit and Garden, a mighty mecca filled with ethnic foodstuffs. I’d purchase (and carefully package for travel) authentic blocks of Greek feta cheese, preserved in brine.

Last week, I was heartbroken to learn that the person responsible for my love of Greek food, Milt Datsopoulos, had passed away. He was a Missoula, Mont. legend, and one of the best humans I’ve ever met. I’m not alone in my admiration — his well-written obituary captured much of what made his greatness, stating, “He represented billionaires and indigents and was equally proud of both.”

I’d say I fell somewhere in the middle of those demographics. Milt was not only my attorney, he was a friend, confidante, client and business associate.

When my husband and I were first displaced from our Gold Creek ranch and relocated to Missoula, Milt and his wife Joan made sure we had invitations to acquaint us with the “city folks.” After I decided to open a restaurant and catering business, Milt and Joan were my first clients.

He was proud of his heritage and, more often than not, their party menus were Greek-focused. I learned from the Datsopoulos’ Greek recipe vault to make keftedes, moussaka, tzatziki, tiropita, and Milt’s favorite, Greek salad with lots of lemon juice, briny Kalamata olives and “authentic feta cheese.”

At one of their standout parties, I met Dennis and Phyllis Washington, billionaire owners of Montana Rail Link. Dennis loved the lamb I’d prepared that night and, soon after that, I had my first MRL assignment — cooking onboard the Silver Cloud, their first opulent passenger car. More than 30 years ago, that introduction led to 20-plus years of a unique career in the private passenger car industry.

My restaurant was across the street from Stockman’s Bar and down Milt’s law office block. His legal assistants did their best to keep him on schedule, guarding him against drop-ins. Though it was challenging to secure a bona fide appointment with Milt, you’d find him a couple of nights a week at Stockman’s, holding court. He rendered so many hours, anchored to the bar, doling out free advice to anyone in need of counsel, that he was assigned his own key on the cash register.

The son of Greek immigrants, he grew up on Railroad Avenue, not too far from Stockman’s Bar. He was raised among other immigrants who mainly worked for the Northern Pacific Railroad.

The NP depot was just down the street from his home, where Milt spent time selling newspapers and cigarettes to waiting passengers.

Milt was fond of saying, “I don’t collect things because I don’t care about things; I collect people.” I’m grateful I was part of his collection. I’ll think of him fondly, every time I gather lemons, garlic, oregano, Kalamata olives and authentic feta cheese for his favorite (and mine) Greek salad. Opa, Milt! 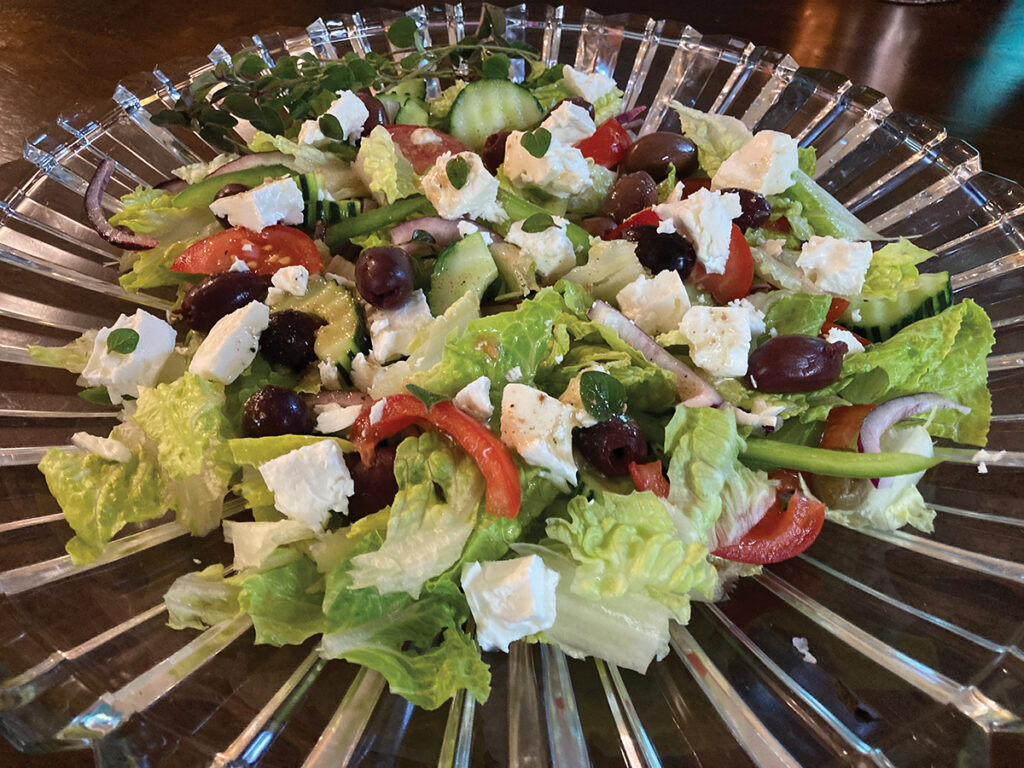 In a glass canning jar, add all the dressing ingredients, secure the lid tightly and shake vigorously until emulsified.

Wash and spin or pat dry the lettuce.