Paddler’s Alehouse offering up beer, folklore and much more in Ponderay

After years of working for other people, Chris and Stephanie Wiens decided to become captains of their own ship — one with a host of delicious local beers and the occasional lake monster sighting.

In reality, that ship is Paddler’s Alehouse — a new taphouse in Ponderay brought about by the Wiens’ desire to become their own bosses.

“With our love of Laughing Dog and all the other breweries in town, we decided to start our own [business],” Chris said, “and bring everything under one roof.” 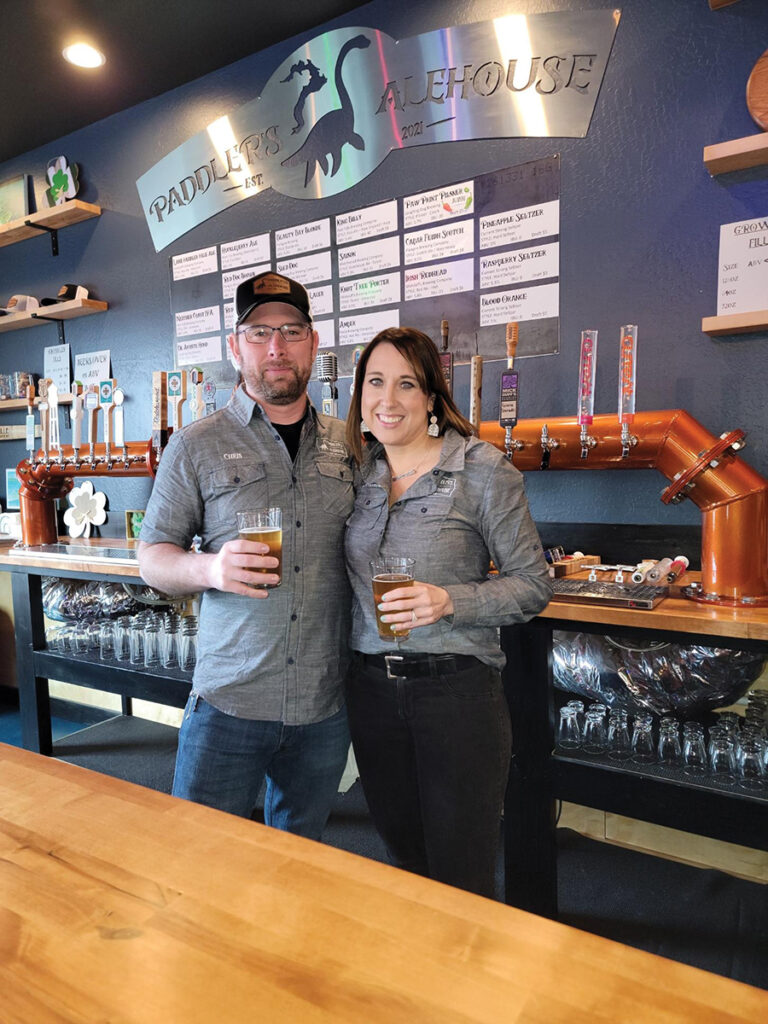 Chris and Stephanie Wiens stand behind the bar of their new taproom in Ponderay. Courtesy photo.

Paddler’s Alehouse, which opened in February, came to be with that local spirit in mind, named for North Idaho’s very own cryptid water-dweller: the Lake Pend Oreille Paddler.

“We had many, many, many names,” Chris said with a laugh, adding: “There are so many things that are reused and don’t stand out. With the whole local theme, we wanted to find something that represented the local area — just this area.”

You can often separate real locals from newbies by bringing up the Paddler and its mystical past. For those out of the know, the creature is essentially a Loch Ness Monster figure, but specific to the fifth-deepest lake in the United States.

“Of course we tell a lot of people the story who don’t know it,” Stephanie said.

Just like their name, Paddler’s Alehouse plans to pay tribute to all the best locals have to offer — from the beer on tap to the art on display to the merchandise for sale.

“The true basis of everything we have done, or at least tried to anyhow, is local,” Chris said, noting that both he and Stephanie were raised in North Idaho.

“Supporting local, supporting everything we grew up in and loved in the community that we raised our kids in,” he added. “With that in mind, everything we’ve done we’ve tried to find local vendors, local suppliers — anything we can to support what’s here.”

Paddler’s Alehouse features 24 taps offering beer, cider and hard seltzers, as well as local wine, non-alcoholic options and free coffee. There is also a lengthy list of “bar treats,” as Stephanie called them, like chicken wings, corn dogs, fries, pizza pockets and more. All snacks are baked, not fried, and come with a choice of more than 10 sauces.

Drafts range from $5-$8, and snacks from $4-6. Paddler’s is currently offering a flight special of four pours for $6. 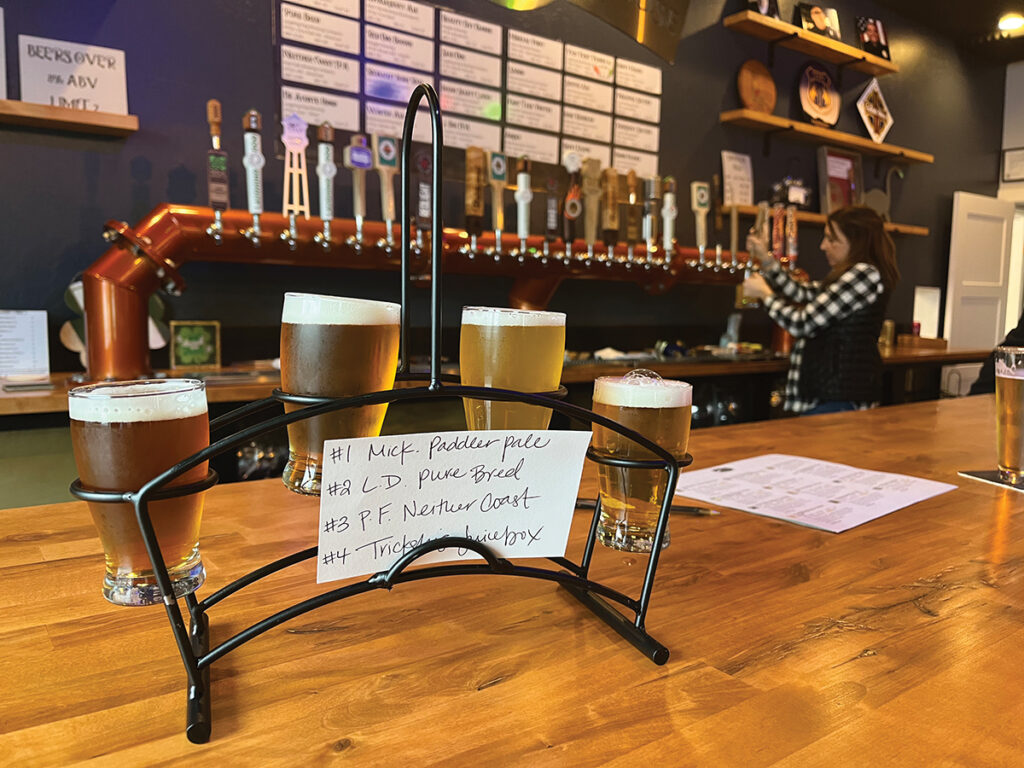 A flight of beers from Paddler’s Alehouse, currently on special for $6 and featuring all North Idaho brews. Photo by Lyndsie Kiebert-Carey.

On a recent Friday afternoon, this reporter tried the establishment for the first time. My husband ordered a blonde ale from Coeur d’Alene-based Paragon Brewing (which he loved) and I opted for a flight featuring beers from MickDuff’s, Laughing Dog, Post Falls Brewing and Tricksters Brewing, also in Coeur d’Alene. (MickDuff’s Lake Paddler Pale Ale remained the favorite, and no doubt an appropriate choice for this outing.)

The excursion was affordable, delicious and supremely laid back — all in all, a great pitstop on the way home from grocery shopping. What’s more, it was Stephanie and Chris themselves who served us at the bar, highlighting their hands-on approach to the business.

“We’re all about the human interaction and supporting local and good beer,” Chris said.

The Wiens hope to foster those connections — between patrons, but also between local products and consumers — as Paddler’s Alehouse gains steam.

“We’re going back to the roots of what a pub and taphouse should be,” Chris said.

Paddler’s Alehouse is located at 100 Vermeer Drive in Ponderay. Find the business on Facebook at facebook.com/paddlersalehouse to stay up-to-date on events and specials.