Each autumn, as the natural world quiets down in preparation for a long winter nap, there’s one magical substance that comes into its own: beer. Thanks to newly cut hops, beers take on the freshest flavors of the year right after harvest — which is another reason Oktoberfest celebrations happen this time of year. 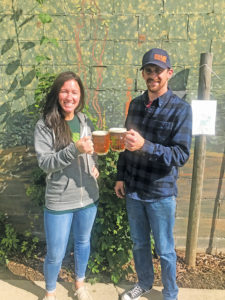 Kelsey Batrack and Cooper Balke show off the new glassware at the MickDuff’s Beer Hall courtyard. Note the fresh hops still growing behind them. Courtesy photo.

To usher in another successful hop harvest, MickDuff’s Beer Hall will host its sixth annual Hoptoberfest on Saturday, Sept. 28 from 11 a.m.-11 p.m. The local brewery will release two seasonal beers that embody what the harvest is all about: the Local Wet Hop Harvest IPA and Wet Hop IPA.

As its name suggests, the Local Wet Hop Harvest IPA is special because it has been brewed entirely using locally grown and harvested hops.

“We collected hops from amateur hop growers in Bonner County to make this one,” said MickDuff’s Assistant Brewer Mack Deibel. “This year we collected 60 pounds of hops, which maxes us out. It’ll make about 60 gallons of beer, which could last for a week.”

The second release — the flagship of MickDuff’s harvest season — is the Wet Hop IPA, a version of the breweries popular Lupulicious, named after the lupulin contained in hops.

“Lupulins are glands in hops that give off that aromatic flavor,” Deibel said. “If you took a grinder and grinded hops down to nothing, the good stuff that would fall all the way to the bottom is the lupulin.”

Deibel said the term “fresh” has been bandied about among brewers, generally denoting hops that are fewer than three months old. Not the case at MickDuff’s.

“The way we do it is, the hops are picked off the vine and into a beer typically within six hours,” he said. “At the end of a brew day, when the beer is resting in the whirlpool, we’ll put fresh hops in there and let them soak. We’re trying to get the green, dank flavors that are often dried away during the drying process for hops. You can only make this beer one time a year — during harvest.”

To launch into Hoptoberfest, MickDuff’s will first throw a couple of pre-celebration nights. The beers will first be released Thursday, Sept. 26, where pubbers can also watch Thursday Night Football and chat with brewers about the new releases.

MickDuff’s will release a new, 20-ounce souvenir glass jug that can be filled for the price of a pint all weekend long.

On Friday, Sept. 27, catch live music from 5-10 p.m. with Red Blend, along with the new beers available for tasting.

There will be games and events all day Saturday, Sept. 28, including stein hoisting competitions, hammerschlagen (a strangely addicting game in which participants compete to drive nails into a board using the claw side of a hammer) and the always popular cornhole.

Taster trays will also be available with both wet hop beers, a pumpkin ale and MickDuff’s FallFest beer.

The DIGaddie will play live music from 2-5:30 p.m., followed by the Brendan Kelty Trio from 6:30-9:30 p.m. Minors accompanied by parents will be allowed to attend Saturday’s festivities, and there will be plenty of non-alcoholic options available for them to drink — including a craft root beer with certified-organic ingredients.

“After the harvest is the time to have a party,” Deibel said. “It’s a time to celebrate the end of summer and get a little crazy before winter hits.”