The changing faces of Sandpoint’s eats and drinks

Things are changing at the Pend Oreille Winery, both visually and behind the scenes.

As far as the behind-the-scenes operations go, winery creators Steve and Julie Meyer are handing over the reins to Jim Bopp and Kylie Presta, who have both been making wine with the Meyers for some time. 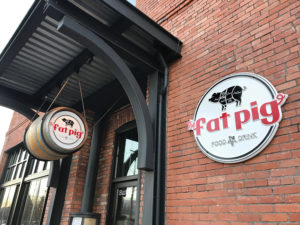 The entrance to Sandpoint’s newest eatery, the Fat Pig. Photo by Lyndsie Kiebert.

“We’re very glad that we have somebody that we can pass it on to. They’re very qualified and we really can’t think of a better time to do it. They’re young, they’re ready,” Steve said. “If (people who drink POW wine) like what they had, they’re going to love what they’re going to have.”

Bopp grew up in Sandpoint, and after moving away to college, getting married and ending up in Boise, he and his wife decided they wanted to come back. While she secured a job at Coldwater Creek, Bopp said he drifted from job to job until Steve called him in 2007. Bopp had helped Steve with winemaking in the past, but 2007 marked the beginning of a serious career in the craft.

“I started at the bottom and started learning what I needed to know,” Bopp said. “I felt like this could be a career job, and as time went on I decided this is where I ought to be.”

Presta, co-proprietor and wine chemist, is a Bonners Ferry native who moved away but came back to the area five years ago. With a chemistry background, she said she offered to help Steve and had her first winemaking experience during the 2014 harvest.

“I really just enjoyed every day and every aspect of winemaking,” Presta said. “I’ve just been trying to get more involved in the whole process — from grape to bottle.”

Bopp emphasized that because he and Presta have been so heavily involved in the winemaking process over the past several years that people shouldn’t fear the winery will change.

“We’re the same winery that we’ve been,” he said. “We’ll continue to keep making award-winning wines like we always have.”

As far as what’s next for the Meyers, Steve said he and Julie will still be actively managing the Belwood 301 building on the corner of Cedar and Third, home to the winery’s tasting room and now a new eatery in town: the Fat Pig.

Fat Pig owners Brett Mullinder and Kelley Kennedy always dreamed about opening their own restaurant. Having worked in the food and service industry from Maine to Idaho, including several establishments on Schweitzer Mountain over the past few years, Mullinder and Kennedy decided now was the time to build something all their own. All they needed to get started was a location.

“Thankfully we didn’t bite on anything too soon because we stumbled across this little beauty,” Kennedy said, referring to the space behind the Pend Oreille winery tasting room, now home to the Fat Pig — a pub with a classy twist.

The Fat Pig’s menu features salads, sandwiches and hearty entrees. Mullinder said the menu will rotate depending on what’s in season, seeing as they hope to utilize local vendors for making a lot of their dishes. While Kennedy said the menu is largely meat focused, there are plenty of vegetarian options as well.

“We’re definitely looking forward to being able to do what we’ve always wanted to do, which is being able to show ourselves through our food and our love of service,” Mullinder said.

The Fat Pig is currently open Monday-Saturday starting at noon. Customers will be seated until 9 p.m.