Like most everyone else, I have a few things I need to cross off of my bucket list. I’ve got some serious travel plans — someday I am going to take the world’s longest train trip (more than 10,000 miles), from Lisbon, Portugal to Ho Chi Minh City, Vietnam. Also on my list are non-travel achievements and notable accomplishments that I hope to add to my legacy. I want to leave my heirs something they’ll take pride in and find obituary-worthy (more than just my unparalleled, parallel parking prowess).

I’ve always had a secret desire and crazy notion of a cooking feat so grandiose it would be featured in the Guinness Book of World Records. I often (mostly during episodes of insomnia) fantasize about the perfect entry I could make/bake to accomplish this lifelong culinary dream.

I figure I have another 30 or so decent years ahead of me, and it’s a good thing because I’m pretty sure the wait time for the Guinness World Records is about that long. My big idea is not even that original — I was shocked to learn that the Guinness World Records receives more than 50,000 record applications a year — that’s almost 1,000 applications every week. Due to the sheer volume of applications, the waiting time for a response can be up to 12 weeks, or about as long as the back-ordered home improvement supplies I’m waiting to receive.

Once they have documented the evidence for my yet-to-be-determined (but awesome) culinary record attempt, it can take the folks at Guinness World Records up to another 12 weeks to review the documentation and let me know if I’ve achieved a world’s record.

Part of the problem is that baker’s block stymies me, as I try to develop an idea for something that’s not only edible and delicious but original, awe-inspiring and beautiful. My most fantastic culinary achievement to date is a life-sized bûche de noël (yule log) that I created for a financial institution’s grand opening/holiday party nearly 30 years ago in Missoula. The finished buttercream-filled, dark-chocolate ganache-covered log creation, decorated with dozens of cocoa-dusted meringue mushrooms and sugared marzipan holly, was more than six feet long and 16 inches in diameter. We displayed it (and transported it) on a heavy, swinging wooden door, dismantled from my catering facility.

It took four men to tote it three blocks down Higgins Avenue. They drew plenty of stares. I proudly paced them until we reached First Interstate Bank, and I’ve always regretted not capturing photos of the process or finished product; but, back then, 20-pound cell phones were only capable of making $15 phone calls.

Though it was a great personal accomplishment, it can’t hold a birthday candle to the most enormous cake ever made: a 17,388-foot-long vanilla-flavored beauty, baked by 1,500 chefs and organized by the Bakers Association of Kerala, India.

The most expensive cake I ever made was the labor-of-love wedding cake for oldest daughter Ryanne. Though the five-tier beauty was practically worth its weight in gold (actually, European butter), it didn’t come close to the price tag of cakes baked for royalty and celebrities. Many of those creations can cost  upwards of $100,000.

I’ve also thought about making something that I could flambé, because I live by the words of my dearly departed, favorite chef, the fabulous Julia Child: “I think every woman should own a blow torch.” I own one and it’s omnipresent in my kitchen. Mine is actually an industrial plumber’s torch that I use for glazing hams, browning meringues and burning sugar to finish topping custard-like desserts, like crème brûlée.

I’m not even going to think about an entry for that record. According to Guinness Book of World Records, the largest crème brûlée ever created was made by the students of the Le Cordon Bleu Program at the Orlando Culinary Academy in Orlando, Fla., and weighed a whopping 1,599.96 pounds — geez, if only they’d added another egg or two.

Most specialty foods created for world records end up as community projects, to be sold by the serving, with the money going to a local charity. So, if anyone has a brainstorm and some brawn, I’ve got the blowtorch.

Even if I never end up dangling off a crane, torch in hand, burning sugar atop the world’s largest crème brûlée, I still guarantee this recipe to be a winner. 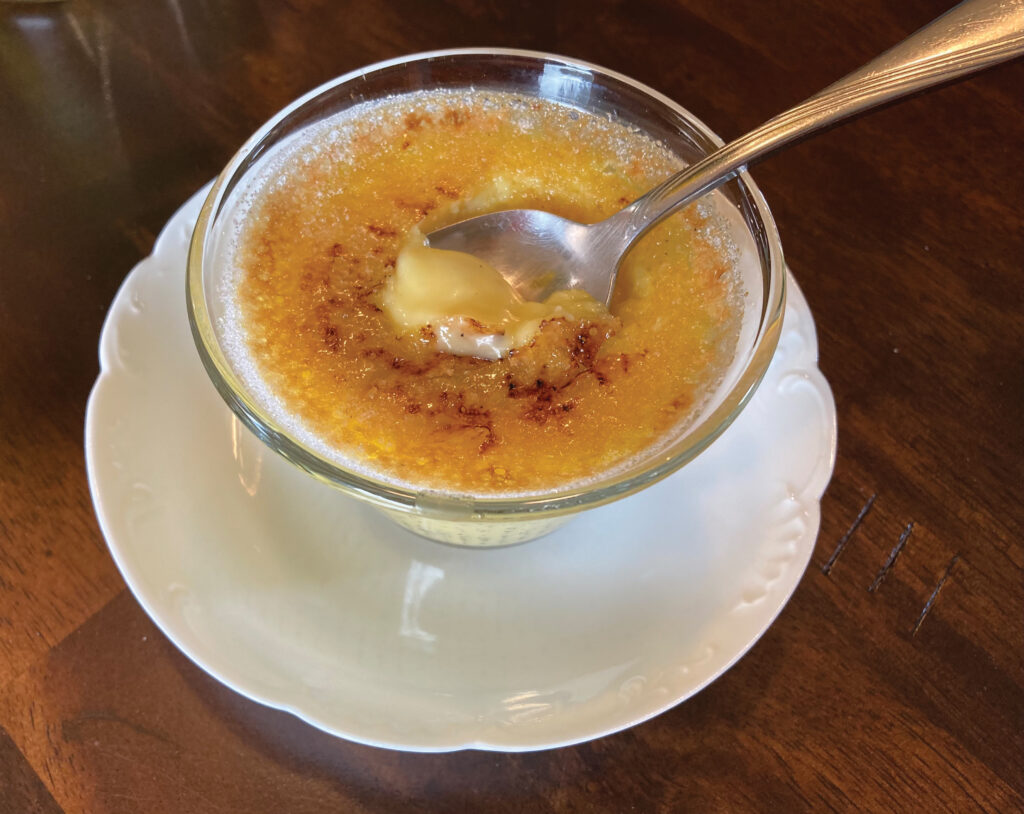 If you can use farm fresh eggs, by all means, do so.  The hallmark of this dessert is the cracking sound made when the back of the spoon is tapped on the sugar topping.

With rack placed in middle of oven, preheat to 325 degrees Fahrenheit.

In a medium saucepan, combine cream and sugar, mixing well. Use a small knife to slit vanilla bean open. With the back of your thumb nail, or the knife, scrape the seeds from the vanilla pod into the saucepan. Once all the seeds have been added to the saucepan, add the empty vanilla bean into saucepan. (Give it a little bend to expose the inside, where the remaining seeds will get more exposure/flavor).

Over medium heat, whisk until sugar is completely dissolved and the mixture comes to a simmer. Simmer on a low boil, while whisking, for about 10 minutes. Remove from heat and remove the empty bean and any other pieces of the bean.

In a medium bowl, whisk yolks until well blended. Very carefully and in a very slow stream, whisk the hot cream mixture into the yolks, just a little at a time, so as not to cook the eggs. When all the cream has been incorporated, give it a couple more whisks to make sure it is well blended.

Divide custard evenly among six individual 3/4-cup ramekins. Place ramekins in a glass 9”×13” baking dish. Pour enough boiling water into the pan to go halfway up the sides of ramekins. Carefully place the baking dish in the oven and bake for about 35 minutes. Custards should be almost set in the center when the pan is gently shaken.

Remove ramekins from baking pan and let cool to room temp. Chill in fridge for at least four hours (or up to two days).

When ready to serve, sprinkle 2 tsp fine sugar evenly over each chilled custard. With a blowtorch, move flame quickly back and forth over the sugar topping until it reaches desired caramel appearance. Repeat with other custards (don’t caramelize until ready to serve). Serve immediately, cracking sugar (brulee shell) with the back of your spoon.