Sipping in the shade

A pair of tipples for toasting the return of spring

It’s been a heckuva 12 months since last spring. According to researchers, such as those at the University of South Carolina, it’s been a particularly hard couple of seasons on the nation’s collective livers — alcohol sales exploded as the COVID-19 lockdowns began last March. By April 2020, the data suggested that booze sales had spiked to 55% above normal within the first month of pandemic life.

Those numbers have remained high, and will likely continue to be so as we transition into the warmer months. On top of everything else, it has long been traditional for humans to celebrate the turn of the seasons from winter freezes to spring breezes — very typically with a cool, refreshing alcoholic beverage in hand.

This year, it seems particularly important to toast the return of spring. The following are a pair of easy-to-moderate cocktail recipes that readily enliven any springtime porch session. 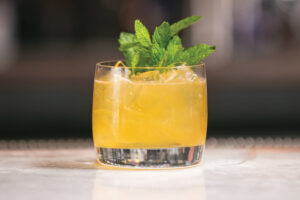 This is an oldie but a goodie. First published in the 1880s bar books, the whiskey smash is a relative of the iconic mint julep (the latter being a combination of whiskey, simple syrup, carbonated water, mint sprigs and crushed ice), but heightens its effect with a burst of citrus.

According to the best sources, the whiskey smash requires 2 oz. of whiskey — Bourbon or rye seem to be preferred — four or so sprigs of mint, with spearmint being particularly well recommended; a like number of lemon wedges; and 3/4 oz. of simple syrup (or a lump of sugar, if you’re in a hurry).

Using a cocktail shaker and muddler, bash up the lemon wedges, making sure to grind the peels to extract their essential oils. Then add the whiskey, sugar, a couple of mint leaves and ice (use regular cubes, not shaved ice), shake and strain twice over ice in a rocks glass. Garnish with the remaining mint sprig.

My 1941 edition of Mr. Boston’s De Luxe Official Bartender’s Guide describes the whiskey smash as including 1 oz. of carbonated water to zazz up the concoction, as well as adding garnishes of orange slice and a cherry.

Owing to its essential simplicity, the smash may be successfully adapted to a range of base liquors — gin/vodka and strawberries is an especially good alteration to the traditional recipe.

I categorically reject the notion of “girlie” and “manly” cocktails — there are only good and bad cocktails. Among my favorite springtime refreshments is the French 75 — a combo of gin, simple syrup, lemon and sparkling wine that your garden variety boor would probably scoff at. Well, to that tasteless jerkwad, I’d remind him that the drink is named the “French 75” after an artillery piece from the First World War and is so named because it packs as much of a wallop. 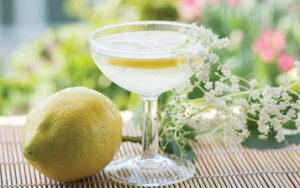 To fix, shake together the gin, St. Germain and lemon juice on ice, then strain into fluted glasses or coupes (the latter being sort of like Champagne flutes that have been made shorter and fatter). Pour in the sparkling wine, garnish and serve.

You’ll be pleased with its ethereal blanched honey hue, but beware of this family of spirits — these combinations taste entirely too good, too refreshing and treacherously “healthy.” They are truly good and refreshing, but definitely not the latter descriptor. Proceed with caution and enjoyment.