Never too young to rock

Upon first glance, it’s your average North Idaho shop. Enter the door, walk the smooth concrete surface toward the back and get a closer look. Several doors stand upright to create a backdrop. Christmas lights add some color. A large Buddha head and several mounted deer adorn the walls. A leather loveseat and cheetah-print pillow signal that this is the place to sit down and watch, so I do, as four teenage boys file in and out of the shop, unloading their instruments and amps from the Subarus in the driveway. 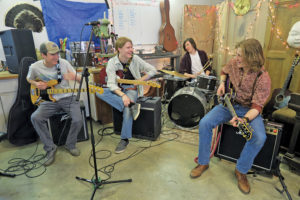 This beloved “jam space” — as guitarist Jake Smith calls it — is at the top of a bumpy dirt road about a dozen miles into the Selle Valley. It’s nestled in the back of the shop beside drummer Riley Christman’s house. The leather loveseat is admittedly comfortable, as is resident cat Phanny, curled up beside me. The band settles in, sitting in a half circle with the jam space laid out behind them.

Few places could be a better fit for this raucous rock band — tucked into the woods, just a quick drive from their respective schools in Sandpoint. A white board mounted nearby wears the names of Stone Cloud 4’s impressive handful of original songs.

When asked what the creative process looks like when those songs come to life, Smith said with a laugh, “You’re pretty much looking at it.”

The crowd at the Northern Stars Rising music competition in March confirmed with their cheers and headbanging that yes — Stone Cloud 4 sounded cool. The judges concurred, as the group — which just officially formed in September — won Performers of the Year, entailing a cash prize, photoshoot and the chance to play the Pend Oreille Arts Council’s annual Art Party.

Though each band member came into their love of music on their own, it’s clear the music of generations past plays a large part in their sound. Bassist Sean Causey said he is influenced by the Beatles, but also loves funk. Lead singer Liam McCoy, known as the band’s “jack of all trades,” said his dad had a Beatles poster hanging inside the entrance to his home growing up. Christman admits he learned to drum to jazz music, but got into rock once Smith recruited him for SC4. Smith recalls a time in the bathtub at six years old when “Sweet Child O’ Mine” played loudly all through the house. The guitar solo on that track triggered a vision in him that he carries to this day.

“It was the very first time I realized I wanted to be a rock and roll star,” he said.

Even with all that passion, SC4 is facing a major hurdle when it comes to the Sandpoint music scene. The Forrest Bird Charter and Sandpoint High students are all 18 and under, making it difficult to play their music around town, where most venues require patrons and performers be 21 and up. Still, the band said their growing fan base has been helping them find more places to play.

While sometimes people don’t know what to expect when a bunch of teenagers say they play their own version of classic rock, the guys agreed they’ve come a long way just in their first few official months as Stone Cloud 4.

“I think we’re pretty unique,” McCoy said. “We’re not following a lot of the new trends. We’re taking a step back. We can get our clothes at Goodwill. We can go, ‘Oh, that shirt looks cool. It looks like something my dad would wear in the ‘80s. I’ll take it.’”

As for the future, there’s a SC4 demo in the works, and a dream that goes far beyond the Christmas lights, taxidermy and leather loveseat of the jam space.

“We definitely want to be a household name,” Smith said. “I figure we’ve got the potential.”

Catch Stone Cloud 4 in action May 3 at the Bonner County Fairgrounds 7-10 p.m. as they headline a benefit concert for the Bonner General Community Hospice’s Kids Grief Camp. The night will feature silent auction items, food from Sandpoint Curry, drinks from Eichardt’s and opening tunes from Montana punk band High Trees n’ Ammunition. Tickets are $10 and available at Eichardt’s, Evans Brothers Coffee, Sandpoint Super Drug and at the door. Kids 15 and under get in free.