Happy National Tater Day! That’s right, folks, it’s Tater Day. Between my Irish heritage and my role as the mother of a vegetarian, I know my way around a potato. Maybe not all 4,000 varieties, but I’m off to a good start.  It seems everyone associates those of us from Idaho with the potato.  Usually my first interaction when I arrive in a city, foreign or domestic, is with a taxi driver. Without fail, their response to the initial inquiry of my homeland is, “Ah. Idaho. Potato!” I have learned to embrace their knowledge of this tater fact with feigned delight. 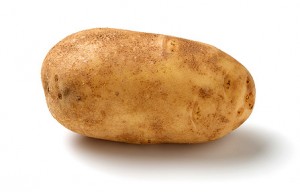 They don’t know about our gorge in Hells Canyon, which is deeper than the Grand Canyon, nor the fact that Sandpoint was once known as Funnel Station, where more railroads converged than in any other spot in North America, but they know of the Idaho potato. This big potato’s heritage comes not only from Idaho, but also Eastern Washington, and much of its fame is owed to the great Northern Pacific Railway and Hazen Titus, an inventive culinary professional who served as the railroad’s dining car superintendent.

For several centuries the small Irish Potato was enjoyed by many in the Emerald Isle. It became the main food for the poor as they had little else to eat. But in 1845 a blight destroyed the country’s entire potato crop, prompting a mass immigration of the destitute to America. Once here, the Irish wanted nothing to do with the small indigenous potato from their former homeland, though America’s finer restaurants continued to serve the popular petite potatoes to wealthy diners.

Unlike the Irish, whose potatoes were small and diseased, the western farmers were cursed with “success,” but their perfect Russet Potatoes were unsellable because they were too big for fine china plates. In desperation, the farmers felt they had no other choice other than to feed their entire potato crop to their livestock and hope for a better year next year.

Where others saw failure when they looked at these oversized two plus pound potatoes, Hazen Titus saw a way to spread the fame of the great northern rail route to the whole nation—and beyond.

He purchased the large, unappealing potatoes, baked them in the steam from the train’s engines and then served them with butter to the hungry diners in the westward moving dining cars. And so the baked potato was born.  Premiums such as postcards, letter openers, and spoons were also produced to promote “The Route of the Great Big Baked Potato”; the slogan served the Northern Pacific for about 50 years.

While the Northern Pacific Railroad ceased to operate in 1971, the potato continues to thrive. Today, there’s more than 1 million acres of potatoes planted in the US, and Idaho is still the number one producer.  Fried, baked or boiled, they stand alone. In most every ethnic cuisine, potatoes are an important primary ingredient, seasoned and wrapped in various doughs as samosas, pierogis, piroshkies and pasties. In some countries, you’ll find them as a key part of a dessert pastry or candy. Still one of my favorite staples, potatoes are definitely one of the three foods I’ll pack for my “desert island” sustenance.

Whether you choose to celebrate National Tater Day with a rousing round of Mr. Potato Head or a chilled potato-vodka on the rocks, I hope you’ll also try one of the recipes I’ve included. Just keep an eye on the coffee cake. With the help of his two young boys, son-in-law Russ was recently able to polish off an entire cake in one lazy Sunday afternoon. 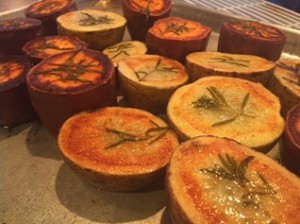 These potatoes are easy to prepare and make a beautiful side dish to accompany most any entrée. You can also sprinkle them with a little parmesan cheese, but don’t cover the pretty rosemary.

Scrub potatoes, dry, cut into 2” rounds, and coat all sides in olive oil. Cut rosemary into small sprigs and place on sheet pan. Press each potato round firmly onto a sprig.

•Bake in middle of preheated oven until potatoes are golden brown and tender, about 35 minutes.

•Carefully lift potatoes from foil, season with sea salt and serve rosemary side up. 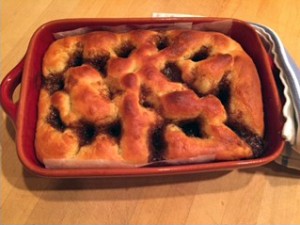 •½  cup plus 2 tablespoons warm water (save the water)

•In a small saucepan combine the potato, peeled and cut into 1-inch pieces, with enough water to cover the pieces and simmer, covered, for 15 to 20 minutes, or until potato is very tender. Drain the potato (save the liquid), force it through a ricer or strainer into a bowl, and stir in 2 tablespoons of the potato water.

•Once the rest of the water is cooled to barely lukewarm, add to small bowl with the yeast for 5 minutes, or until the mixture begins to foam.

•In a large bowl stir together well the yeast

mixture, the mashed potato, the sugar, the butter, the egg, and the salt, add 2 ½ cups of the flour, stir the dough until it is combined well.

•Turn the dough out onto a floured surface and knead it for 8 to 10 minutes, adding as much of the remaining ½ cup flour as is necessary to form a smooth and elastic dough. Transfer the dough to a large buttered bowl, turn to coat it with the butter, let it rise, covered with plastic wrap, in a warm place for 1 ½ to 2 hours, or until it is double in bulk, then punch it down. The dough may be made 1 day in advance and kept covered and chilled. Bring the dough to room temperature before continuing with the recipe.

•Preheat the oven to 400°F. Press the dough evenly in a buttered 13- by 9-inch baking pan and let it rise, covered with a kitchen towel, in a warm place for 30 to 45 minutes, or until it is doubled. Make indentations all over the top of the dough with your thumb and scatter the butter over the dough. In a small bowl stir together the brown sugar and the cinnamon and sprinkle the mixture evenly over the dough. Bake the cake in the middle of the oven for 20 to 25 minutes, or until it is dark brown and cooked through. Let the cake cool and cut into small squares to serve.