Chances are, if you grew up in Sandpoint over the past 25 years and play chess, you learned how from Lou Domanski.

I can still remember in the late 1980s at Southside Elementary School, when our teachers brought in this white-haired man who talked with a Polish accent and proclaimed that he was going to teach us all the game of chess. 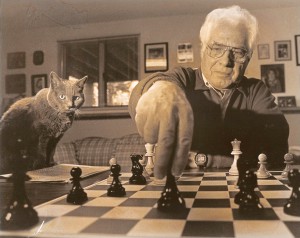 Lou Domanski at the chess board, with a furry apprentice looking on. Courtesy photo.

It’s hard to imagine in today’s standards, but back then, we were wild about the game. During lunchtime recess, while other kids were out playing, the chess aficionados would set up their boards and play.

“I recall a birthday party when my son was 11 and had several guys over,” wrote Mary Wells, a former Southside teacher. “What did they want to do? They all pulled out a chess set and game on … this amazed and delighted me, for these were active go-go boys who had caught Lou’s chess ‘bug’.”

Once a year, Domanski hosted a chess tournament, originally called the Sandpoint Chess Festival. The games used to be held at the Silver Lake Mall, which saw dozens of tables set up along the length of the mall, each with young kids playing chess against one another. The winners of their respective divisions would walk away with a sweet prize; a ride in Domanski’s glider over Sandpoint.

I was lucky enough to win the tournament in my division during fifth grade, and still remember riding around with Mr. Domanski in his glider like it was yesterday. He even let me take the controls briefly. Twenty-five years later, I still play what is arguably one of the greatest thinking games ever invented. 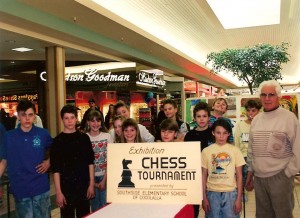 An exhibition chess tournament at the Silver Lake Mall, circa 1990. Lou Domanski is standing far right with his prodegies (the Reader publisher can also be found with a dumb smile on his face, two from the right in the back row. Photo courtesy of Cassadie Spinney.

Then again, chess isn’t just a game. It’s a strategic way of life that has been around for more than a thousand years. Chess teaches you to follow the rules, to look for weaknesses in your opponents, to think two or three moves ahead and to strike while the iron is hot. You can apply many of the strategies of chess to real life. And once learned, it is a game you can play the rest of your life.

There will be three divisions, splitting up playing by age. Elementary age division is for grades 1-6, with a $3 entry fee. Middle/High School division for grades 7-12 will have an entry fee of $4, and an open division will cost $5.Trophies will be awarded for each division.

Registration forms may be obtained at the Sandpoint Parks and Recreation office located at 1123 Lake Street, or online at www.sandpointidaho.gov. Forms must be turned in by Thursday, March 31.

Born in Poland in 1918, Domanski enlisted with the 18th Infantry Division Cadet Officers School as war loomed closer in 1938. He advanced to the rank of Corporal Warrant Officer, and was initially captured by the Soviets, but escaped from the prisoner train. He was later captured again by the Soviets and sent to a slave labor camp until the Nazi German attack on the Soviet Union allowed him to be released. 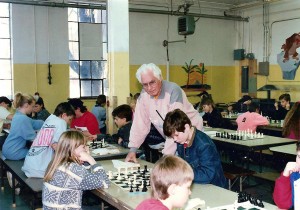 In 1942 he reported to Glasglow, Scotland for intensive training at an RAF air base. In 1944, he was promoted to the officer rank of Aircraft Commander, taking part in many air drops to assist the Warsaw Uprising. Eventually his aircraft was shot down during a night mission over Hungary and he was captured for the third time by the Nazis and spent the remainder of World War II in captivity.

For his wartime efforts, Domanski was decorated with the Virtuti Military Cross, three times with the Cross of Valor, the Polish Air Force Medal, Gold Cross of Merit, the Home Army Medal and the September 1939 Campaign Medal. He was also decorated five times with various medals by the British Royal Air Force.

Domanski moved to Sandpoint in 1988 and immediately started the chess program which continues to this day. He passed away in 2011 at the age of 92.