Netflix series ‘The Queen’s Gambit’ is one worth taking

When a lot of people like something, it’s typically wise to give it a wide berth until evidence suggests otherwise. Suffice to say, succumbing to the buzz surrounding the Netflix limited series The Queen’s Gambit is a wise play.

Based on the eponymous 1983 novel by Walter Tevis and adapted for a seven-episode run by Scott Frank and Allan Scott, the miniseries debuted Oct. 23 on the streaming platform — immediately prompting critics to fall all over themselves with praise. 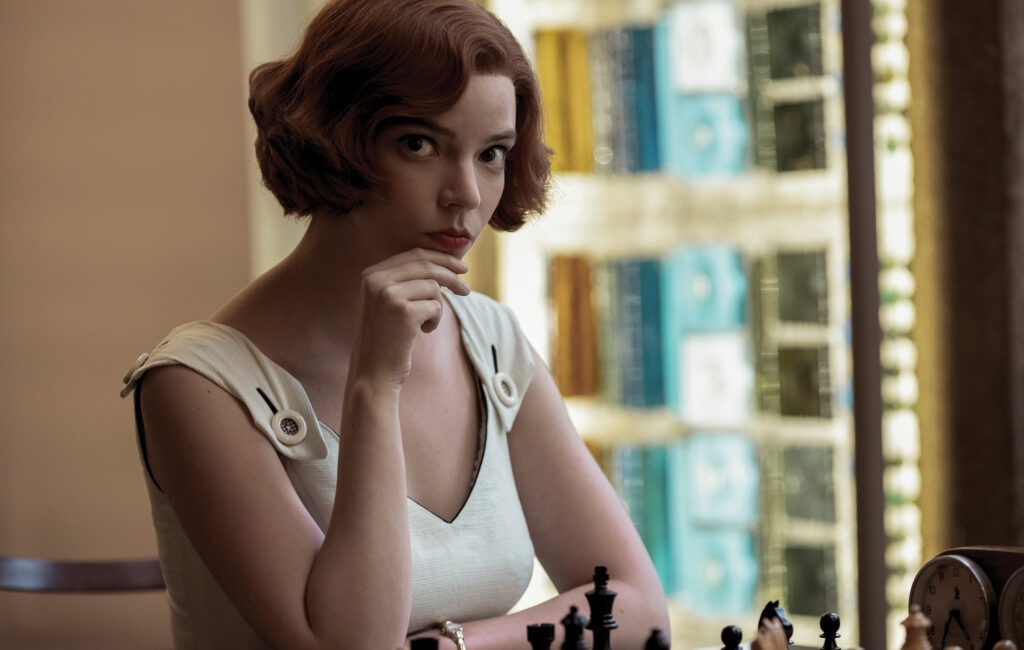 Anya Taylor-Joy in The Queen’s Gambit on Netflix. Courtesy photo.

Writ large, it’s the story of a fictitious chess prodigy orphaned at the age of 9 when her mother dies in a car wreck. The grief-paralyzed little girl discovers chess as a salve for her trauma and rapidly rises to the highest levels of play. Along the way, she comes of age while navigating sexism, self-doubt, addiction and the general contours of Cold War America.

Of course, that synopsis doesn’t come close to doing justice to The Queen’s Gambit.

The protagonist, Elizabeth Harmon (played to stunning effect as a child by Isla Johnston and a young woman by Anya Taylor-Joy) begins her journey in earnest when she’s remanded to a Dickensian orphanage in Kentucky circa the 1950s, where she and her fellow troubled wards are routinely doped with tranquilizer pills; filled with stilted lectures on sex ed, morality and other staples of mid-century “girls” education; and generally made to feel like convicts and failures simply for having lost their parents.

From the start of the series we know that Elizabeth — or Beth, as she prefers to be called — is going to be both a smashing success and a tortured soul. The opening scene puts us in 1967, years after she’s grown up and left the orphanage, as she awakens in a palatial yet trashed Parisian hotel room, where she’s apparently been holed up playing chess with mini-bottles of booze. After a quick shot of vodka and in a panic she flies downstairs and races, shoeless, to a baroque reception room where she’s met by hordes of photographers and fans before sitting down to what seems to be an extremely important chess match.

With her external rise and internal fall clearly foregrounded, we then flashback to young Beth, wandering in a drugged up haze through the dim-lit, lonely corridors of her orphan’s life, where her only friend is a Black girl name Jolene (Moses Ingram), who affectionately calls her “cracker” and routinely warns her about dependence on the little green “vitamins” doled out daily to the girls in a scene reminiscent of One Flew Over the Cuckoo’s Nest.

Beth’s salvation — or damnation, it’s unclear which — comes when she meets Mr. Shaibel, the grumpy old janitor in the basement. Shaibel (the fabulous Bill Camp) spends his time in solitude playing chess and, after some grumbling resistance, allows Beth to learn the finer points of the game. Her fascination with chess quickly becomes an obsession, as she spends her nights moving imaginary pieces on a hallucinatory board on the ceiling above her bed.

Before long, Shaibel realizes Beth is something special.

“Am I good enough?” she asks her initially reluctant mentor.

“To tell you the truth, child, you’re astounding,” he responds.

The first episode is far and away the finest of the series, as Beth breaks gender norms to become a local chess phenom — the game also clearly gives her a lifeline to a larger world, opened even wider when she’s adopted at 15 by a husband and wife in a loveless, boozy suburban marriage.

By Episode 2 we’re squarely in underdog coming-of-age territory, as Beth goes to high school and embarks on her chess career despite the discouragement of nearly everyone in her life.

There are a lot of tropes in play throughout the subsequent episodes. As many reviewers have noted, this is essentially a very long “sports movie,” with Beth moving through increasingly obnoxious, self-entitled male gatekeepers — each time, inexorably and regardless of their lame power plays, catching them with their pawns down.

Yet the sumptuous period costuming and set design (a la Mad Men), meticulous pacing and simmering performances do much to excuse its essential predictability. Even more so, the metronomic thudding of chess pieces on the board and the tick of the clock provide a subtextual soundtrack that somehow evokes contemplation, competition and the merciless progression of life itself. The show manages to make this sound one freighted with high drama in a feat of storytelling that underscores both Beth’s prowess and vulnerability, as her genius comes front-loaded with something like madness.

All that said, the tension in the series comes not necessarily from the chess play itself, but from empathy for Beth’s psycho-social plight and our somewhat morbid curiosity about how — or if — she can put and keep own inner demons in check.