Debating the future of oil trains

Last week, I attended a hearing in Spokane of Washington State’s Energy Facility Site Evaluation Committee (EFSEC). Their topic was the proposed Tesoro-Savage Vancouver Energy Distribution Terminal, to be built in Vancouver, Washington (across the Columbia River from Portland, Oregon), and supplied with crude oil by trains, all of which would come through Sandpoint. 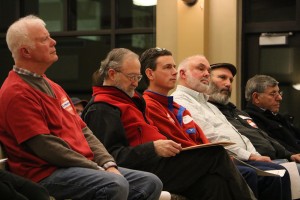 A group listens to the public testimony. Photo by Maddi Eliot.

Opposition to the project comes from many people living along the rail lines that would supply it. The hearing included speakers from as far away as Billings, Montana, as well as more than a dozen from Sandpoint, including its mayor, Shelby Rognstad, and former Bonner County commissioner, Tom Suttmeier. Their concerns ranged from the local––traffic delays, noise, air and water pollution, and the fires and explosions that can follow train derailments—to the universal––climate change, global.

The hearing room was filled to overflowing. The majority wore red to indicate their opposition, and many wore stickers that said “Stand Up to Oil.” The red speakers included elected officials, first responders, church leaders, neighborhood advocates, environmental activists, a child of 10, a couple of grandmothers, an engineer, and the head of the state’s chapter of Physicians for Social Responsibility. They dominated the evening’s testimony: 112 people spoke against the terminal; only 11 spoke for it.

In contrast to the red opposition, supporters wore blue and sat in a block toward the back of the room. Blue people roamed the halls outside the hearing room as well. Almost all were wearing blue pile vests embroidered with the name “Vancouver Energy.”

I’m a red person myself, and I had both the clothing and the sticker to prove it. But I hadn’t had many opportunities to get the perspective of project supporters, and I wanted to hear their opinions. The first blue-vested man I approached explained that he was a consultant, and that he really couldn’t answer my questions about it. He directed me down the hall, where the next blue people I met seemed a bit surprised, even unnerved, by my rosy clothing and “Stand Up” sticker. Nevertheless they sent me on to their hospitality suite, where I was greeted by more blue people and a security officer.

Finally a blue man named John was brought out to speak with me; he was in charge of trains taking oil to Tesoro’s facility in Anacortes, Washington. He was an enthusiastic supporter of the Vancouver project because he believed it would help make the US energy-independent: Oil from our own interior, he said, riding these trains, could replace oil that is now being imported from outside the country.

I asked him about the wisdom of investing in a facility for an industry that appears to be in decline, as the price of oil has dropped so precipitously of late, and more sustainable alternatives are becoming more affordable. But John thought that Americans were unlikely to wean themselves off of oil. He didn’t think that Texas drivers would ever be willing to give up their pickups, and I had to agree that it seemed unlikely that those in north Idaho were eager to part with theirs either.

I pointed out my concern that if an oil train derailed and exploded while passing Farmin-Stidwell school on a Saturday morning in the fall, more than a hundred four-foot soccer players might be in the line of fire. But John reassured me that the dangerous old DOT-111 tank cars were being phased out. When I mentioned that there had been derailments and explosions even with the newer, safer CPC-1232s, he named two even newer types of cars that he seemed to think would improve safety.

The blue people invited me to help myself to food from the handsome spread in their hospitality suite. This was tempting, even though I’d already had a cup of coffee and a few pieces of cheese and crackers from the red people’s (much smaller) suite. In the blue suite there were platters of sliced meats, trays of fruits and vegetables, and something that from a distance appeared a lot like chocolate. But while it was one thing to talk with the enemy, I couldn’t quite bring myself to eat with them.

Even so, John and the other blue folks I met hardly seemed like the enemy. They truly believed the advantages outweighed the risks for this project. I appreciated John for the human face and the honest enthusiasm he brought to this perspective.

Still, I believe that fossil fuels cannot be our future. We can achieve energy independence without more investment in fossil fuel facilities; US dependence on imported oil has already declined dramatically from its peak 10 years ago. Even if the trains could be made completely safe––and I know there are red people who don’t share John’s confidence about this––our future is, and our investment should be, in other kinds of energy that pose fewer risks to our communities and our planet. The Tesoro Savage terminal is a dinosaur waiting to be built, and the EFSEC should turn it down.

Cate Huisman is a freelance writer and editor who lives and works in Sandpoint.