In the past I’ve been able to convince most of my young, adorable grandbabes that there’s a very special, super-secret turkey farm where I go each year to buy the six-legged Thanksgiving turkey, ensuring each youngster in my brood will feast on a drumstick. I may have to come clean soon, as I now have seven grandchildren and the older ones, entering into the double digits, are getting a bit wise to my embellished tales.

I’m sure you have your own Thanksgiving traditions and treasured family recipes that you’ll enjoy today. At my house, after he’s carefully selected his favorite “table curtain,” my 5-year-old grandson Willie (think a very young Nate Berkus) will help me set the table with my best china. To make the things even more extraordinary, he’s brought along a piece of crockery for me to use: It’s a two-piece duck lid/bottom, and I hope I can convince him it’s perfect for butter. The last time we were together he chose this special dish as my personal sushi vessel.

My buddy Kate has her own adorable grandchildren, including Jackson, who will wait for his beloved Nana to bake “circle bread” for their feast. I have a childhood pal now residing in Louisiana, and she serves her turkey with cornbread dressing and sweet potato pie. Another friend from my youth has lived in Hawaii for years, and her Thanksgiving feast begins with pokē. A chef and cookbook author friend residing near San Francisco serves her stuffing California-style, with sour dough bread, mushrooms and artichokes. One thing for sure, we’re loyalist when it comes to these traditional foods.

Years ago, after leaving a dinner gathering, a friend reported that her young daughter Laura wailed most of the way home: “It wasn’t like a real Thanksgiving.  There were no Brussel sprouts!”

With this in mind (potlucks are not my forte), when I have guests for Thanksgiving, I ask for their favorite recipe and prepare it, not only to share their traditional fare but also to learn the storied history that goes hand in hand with food.

A traditional food from my childhood is Irish potato dressing.  Filled with aromatic bits of sage and seasoned with allspice, it’s a favorite with my clan. It wasn’t always served at my holiday table, and I’m ashamed to admit as a child, not a spoonful of the off-colored potatoes passed my lips, which were always pursed in protest. I longed for the bread stuffing that my playmate Irene’s mom made to fill the cavity of their holiday bird.

Some 40 years later on a trip to Ireland with Casey, we were dining with friends in a lovely country inn in West Cork, and I made my way to the carvery station. There on the buffet was an aromatic, heaped dish of the off-colored potatoes of my youth. I immediately scooped some on to my plate, as did Casey. A forkful of the potatoes filled my mouth with flavor and my mind with visions of childhood family gatherings, with aproned women chopping onions and potatoes (and smoking Pall Malls) as they caught up on family gossip. Finding the old family recipe was not easy.  Aunts and uncles had passed, and my mother was in her final year of dementia. I reached out to some younger, distant cousins of my mother and fortunately each of them had the recipe (albeit slightly different versions).

Now, Irish potato dressing is a staple on my holiday table.  It’s not chopping the onions, but something about the preparation makes me weepy every time I prepare it.  Maybe it’s sadness for my poor Irish ancestors, looking for one more way to prepare a damn old potato, or perhaps memories of my own childhood that grow a bit fainter with each passing year.

A common request from my kids is for the recipes of their favorite foods from my table. It took me nearly 40 years and a trip to Ireland to discover the significance of family food history.  Today, while the turkey’s roasting and the grandkids are taking their turn at shaking a cold jar of heavy cream into butter, I’ll take a moment to jot a few notes about the foods I am preparing and later add them to the recipes I’ve begun documenting for posterity.

If you haven’t already begun recording your family’s food history, today is a great day to start. Learn the heritage of family recipes that you have taken for granted all these years.  Ask questions of the cooks, especially the older ones who may be getting ready to pass off the whisk as well as the torch.

If you can, use fresh sage in the potato dressing and garnish with fried sage leaves. 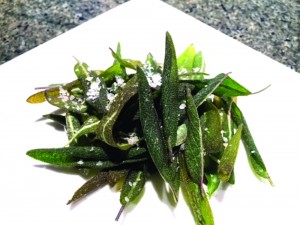 •In a medium skillet, heat 1/4 inch oil over medium-high heat until hot and fry 4-5 leaves at a time, 30 seconds per side. Drain on paper towels, sprinkle with coarse salt.

•Don’t let them brown and once fried, they are fragile so handle with care. 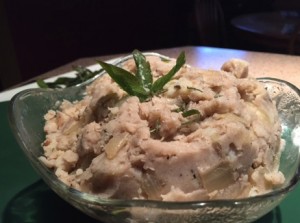 •Mix all the spices/dry ingredients in a small bowl and set aside.

•Boil and coarsely mash the potatoes. Sprinkle in spices and stir until well mixed (don’t over mix, potatoes should remain coarse).

•Saute the onions in butter and oil until well wilted and transparent, combine with the potatoes.

• If stuffing turkey, cool mixture before filling cavity.  If serving on the side, heat in oven and garnish with fried sage leaves.