A brief history of human rights in Bonner County

This is the first of three articles written by members of the Bonner County Human Rights Task Force that will publish in later issues.

Several hundred people gathered in 1991, in the gym of what is now Sandpoint Middle School, to hear Father Bill Wassmuth and other community leaders talk about their experiences in Kootenai County standing up to the Aryan Nations. Their courage resulted in death threats and the bombing of the rectory where Father Wassmuth lived.

They had founded the Kootenai County Task Force on Human Relations. They also witnessed many other acts of violence by members of the Aryan Nations, and a splinter group, which it spawned, called The Order, such as other bombings, killings, bank robberies, forgery, as well as many acts of harassment and intimidation.

The Aryan Nations, led by Richard Butler, professed to be a church, a church that taught the supremacy of the white race and found its inspiration in the deeds of Adolf Hitler. 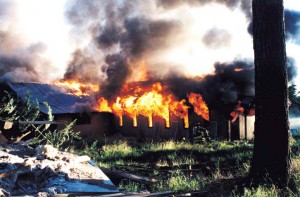 A building at Richard Butler’s Aryan Nations compound in Hayden Lake burns shortly after the group lost a $6.3 million lawsuit to the Southern Poverty Law Center, forcing the forfeiture of the property. Photo courtesy of SPLC.

The gathering was hosted to inform and warn the people of Sandpoint of the need to stand up to this racist group—as their agenda included the founding of a whites-only nation in the Pacific Northwest. Failure to speak out against these beliefs would be interpreted as tacit acceptance.

That evening the Bonner County Human Rights Task Force was conceived. A group of motivated individuals started meeting and in 1992 the Task Force was officially incorporated. In the years that followed the Task Force had many opportunities to speak out against a whole host of racist and anti-Semitic groups and individuals promoting violence and hate—Holocaust deniers, members of the KKK, other Christian Identity followers, and militia groups claiming they would win victory “if not by ballots, then by bullets.”

One of the most insistent promoters of hate was Vincent Bertollini, who called himself “The 11th Hour Remnant Messenger.”  He took up residency in Sandpoint and in 1998 began sending out mailings that attempted to prove the supremacy of the white race.

Sandpoint residents were disturbed by the hateful content of his repeated and elaborate mailings and looked for ways to express their rejection of these ideas. The BCHRTF sponsored a contest for the best ideas of how to “re-cycle” these materials. One suggestion was to shred the materials, mix liberally with manure, and use as compost. Another creative individual took a VHS tape of a talk by Butler, covered it in white material, and used it as a candle holder with the words “Peace on Earth” written on each side in a different language. 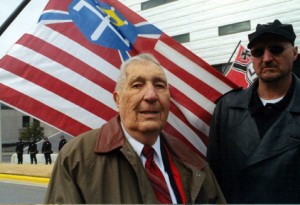 Richard Butler at a rally in Coeur d’Alene in the 1990s. Photo courtesy of SPLC.

The Task Force also invited those who wished to oppose Bertollini’s message to make contributions to the TF that would be used specifically to provide scholarships to a human rights institute for young people in the area. For each contribution received the TF sent a “thank-you” card to Bertollini.

The following year, Bertollini published another flyer in which he targeted specific individuals. The Task Force collected signatures of community members who chose to speak out against this—and took out a full page ad bearing over 700 names. Shortly afterward another ad was published as 300 others contacted the TF after the first ad stating that they wanted their names included.

The theme of this first decade was keeping informed and aware, and finding ways to counter messages of hate in ways that would allow people to come together rather than creating conflict and division. After this the TF entered a second decade where there was a great decline in visible opposition to their stated mission of countering hatred and discrimination, and helping to create a community where all individuals, regardless of race, ethnic origin, religion, sexual orientation or gender identity could feel safe and welcome.

During this time the TF began sponsoring yearly Art for Human Rights events—displaying the artwork of Bonner County students representing articles of the Universal Declaration of Human Rights—hosting events to commemorate MLK Day, giving yearly scholarships to students who honored and promoted human rights, and presenting and supporting educational programs and events that promoted the understanding and awareness of cultural diversity.

Then—in December of 2012—the BCHRTF received a surprise donation from the estate of Dorothy Adler, of over $300,000 – for the promotion of human rights in Bonner County.

After careful consideration, the Board decided to place this money in trust with the Idaho Community Foundation. This makes it possible to offer grants to the community each year from the interest earned.

As it enters its third decade, the BCHRTF is hopeful that this donation will make possible more and more opportunities for community collaboration in the promotion of human rights for all—and that in the years to come there will be fewer and fewer occasions when there is a need to take a stand against hate. However—whenever that need arises—the TF will be ready.