The Mueller Report: A “Short” Form

By Philip A. Deutchman
Reader Contributor

I have read the two-volume, 448-page Mueller Report, entitled, “Report On The Investigation Into Russian Interference In The 2016 Presidential Election,” by Special Counsel Robert S. Mueller, released in March.

In Vol. I, the report immediately and decisively states, “The Russian government interfered in the 2016 presidential election in sweeping and systematic fashion.” In greater focus, the investigation “established” that two military units of Russia’s Intelligence Directorate (GRU) hacked into email accounts of persons affiliated with the Hillary Clinton presidential campaign, the Democratic National Committee and Congressional Campaign Committee; then dumped that data through fictitious online personas and later through Wikileaks. 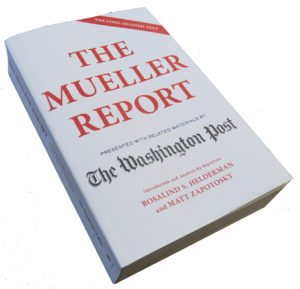 In the report, the word “established” carries great weight. It is defined as, “substantial, credible evidence” [which] “enabled the Office to reach a conclusion with confidence.” I interpret this to mean that “established” provides proof from evidence that leads to a definitive conclusion.

What I found particularly disturbing in Vol. I was the depth to which the GRU hacked into the computers of our state boards of elections, secretaries of state and county governments that were involved with administering our elections. Not only that, Russian agents infiltrated technology firms responsible for manufacturing voter registration software and electronic polling stations. The GRU infected U.S. websites with malicious code to run computer commands.

The report shows explicitly the eagerness with which Donald Trump Jr. sought derogatory information about Clinton. He arranged the June 9, 2016 Trump Tower meeting between senior representatives of the Trump campaign with a Russian attorney. When he learned that some official documents and information could be provided to the campaign that would incriminate Clinton, “Trump Jr. immediately responded that ‘if it’s what you say I love it.’” The report further states that, “the government would unlikely be able to prove beyond a reasonable doubt that the June 9 meeting participants had general knowledge that their conduct was unlawful.” In my opinion, although not necessarily illegal, this conduct shows a complete lack of ethics and no regard for the ethical concept that one should not engage in activities that even give the appearance of impropriety.

Most blatantly, was when Trump encouraged the Russians to interfere in our elections by saying on television, “Russia, if you’re listening, I hope you’re able to find the 30,000 emails that are missing. I think you will probably be rewarded mightily by our press.” It is curious to me that a few lines later, the report points out that, “Within approximately five hours of Trump’s statement, GRU officers targeted for the first time Clinton’s personal office.” This implies that perhaps the Russians were listening.

Such public conduct by the president of The United States is not only unethical and shows a complete disregard for an appearance of impropriety, but endangers the security of our election process.

In Vol. II, the major question raised is whether the president obstructed justice. An extremely important point is made in the report that, “we determined not to make a traditional prosecutorial judgment.”

I don’t know if this is understood by the general public. In 2000, the Office of Legal Counsel issued an opinion that indicting or criminally prosecuting a sitting president would “impermissibly undermine the capacity of the executive branch to perform its constitutionally assigned functions.”

I interpret this to be an overriding constraint that prevents the investigation from concluding that the president committed obstruction of justice. However, in a following statement, the report “recognizes that a criminal investigation during the President’s term is permissible [emphasis added].” What’s more, the OLC opinion notes that a president “does not have immunity after he leaves office.”

Then comes a devastating judgement: “[I]f we had confidence after a thorough investigation of the facts that the President clearly did not commit obstruction of justice, we would so state. Based on the facts and the applicable legal standards, however, we are unable to reach that judgment. … Accordingly, while this report does not conclude that the President committed a crime, it also does not exonerate him.”

Furthermore, the report invites and entrusts Congress to exercise its power to hold a president accountable to obstruction laws. One of the powers Congress can apply is that of impeachment.

In the conclusion of the introduction to Vol. II, the report states, “Because we determined not to make a traditional prosecutorial judgement, we did not draw ultimate conclusions about the President’s conduct.” Then, for a second time the report underscores that it does not exonerate the president.

After this, the report lists three basic elements common to obstruction statutes: an obstructive act which is capable of preventing justice from being duly administered; a “nexus” (or connection) to a pending judicial or grand jury proceeding or other action such as a congressional inquiry; and an intent to knowingly and dishonestly subvert, impede or obstruct the relevant proceeding.

Other laws prohibit “witness tampering” and “attempts and endeavors.” This last category establishes that if an obstruction of justice occurs, “the prosecution need not prove that the due administration of justice was actually obstructed or impeded.” This indicates to me that an attempt or endeavor is enough to charge a defendant, even if they were unsuccessful.

Under the heading, “Overarching Factual Issues,” the report states:

Beyond that, the president also “used public forums to attack potential witnesses who might offer adverse information and to praise witnesses who declined to cooperate with the government.” I would think that this conduct could invoke witness tampering statutes.

Just before the final conclusion, the report emphasizes that no one — including the president — “in this country is so high that he is above the law.”

Finally, in the overall conclusion, authors repeated for a third time that “while this report does not conclude that the President committed a crime, it also does not exonerate him.”

If you’ve patiently stayed with me for this long, the Mueller Report provides what I think is plenty of evidence that could serve as a blueprint for Congress to initiate an impeachment inquiry upon  President Trump. Also, I think it is ultimately up to the American people to make a judgment as to what conduct they prefer to see in a president.

Do we want a president of high character and integrity, or a president whose conduct — even in appearance — is self-serving and corrupt?