Blues on the mountain

Nothing says North Idaho like an off-grid hootenanny celebrating music and community. Even better if it happens every year, and Billy Mullaley has accomplished just that with Panhandle Bluesfest, gracing the mountains of Priest River for the third year on Saturday, Sept. 7. 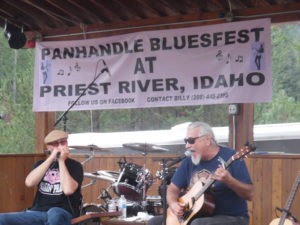 Mullaley said Bluesfest was born of a desire that he and his wife, Patty, had to bring a concert event to his hometown.

That vision consists of a festival complete with four blues bands, 10 hours of music and the option to camp — all on 180 scenic acres on Prater Mountain near Blue Lake that the Mullaleys lease for the event.

“Everybody that goes up there — they just go ‘awe,’” he said.

The Mullaleys’ vision wouldn’t be complete without their cause: to raise money for music education in the three schools in Priest River. Mullaley said he saw a need for supporting local students’ musical endeavors.

“Music is what brings life back to the people,” he said. “It makes the world go round.”

Making the world go round at the 2019 Panhandle Bluesfest are Priest River native Sammy Eubanks, Charlie Butts and The Filter Tips, The Bobby Patterson Band and Slow Cookin’. While this year’s acts are all regionally based, the Mullaleys have hosted performers from as far afield as Illinois in years past.

Those looking to head to Bluesfest should bring $25 cash to get in, lawn chairs, blankets, refreshments and camping equipment if they choose to spend the night. Though Bluesfest is located 12 miles northeast of Priest River and two miles up a logging road, Mullaley said the road is in good enough condition to accommodate RVs.

The Mullaleys agreed that the atmosphere at Panhandle Bluesfest is made unique by the lack of cell service. Being off-grid encourages attendees to live entirely in the moment.

“People aren’t sitting around on their phones,” Mullaley said. “People are going up to dance or they’re kicked back with their coolers, watching the whole thing from their RV.” 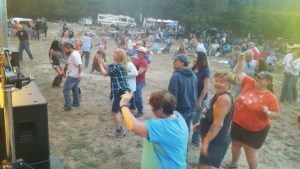 Thanks to the 180 acres of private land on which Panhandle Bluesfest takes place — enough room for 40 RVs to fit comfortably around the stage, Mullaley said — there is plenty of room to grow. That’s good, because the event has only gained steam in the past couple of years. Mullaley said bands are now reaching out to him, hoping to play Bluesfest. Next year’s lineup is already secured.

“I’m trying to be as humble as can be, but I’m super excited,” he said.

While Mullaley’s love of music is evident, why specifically host a bluesfest? First, he said he likes the blues — Patty chimed in to concur. Next, they admitted they have a lot of friends who play blues music, so it just made sense. After a moment of pause, Mullaley got to the root of why he and Patty are passionate about bringing blues music to Prater Mountain year after year.

“Once you get into the blues family, it’s a whole family,” he said. “Everybody wants to help you out.”