David Barsamian, founder of Alternative Radio Boulder, gave a talk to a packed house in the “Rude Girls Room” at the Bonner County Library on Thursday, April 18. He could be Woody Allen’s brother. 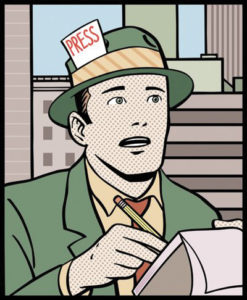 With humor and self-deprecating charm, Barsamian ultimately delivered a dire warning. With gesticulating hands — an inflection implying his New York-based youth and Armenian ancestry — he shared that his family was part of the diaspora from the Turkish invasion and persecution, not often discussed in world affairs. From this he presents a moral framework of the psychological and philosophical roots of fascism.

As a journalist and radio host, his research led him to Noam Chomsky and wide ranging material on social and political analysis. This lends credibility to his views on the propagandist strategies used to concentrate power and wealth in the name of improving economic conditions.

Barsamian disclosed that those improvements involve corporations who benefit from public funds, assets and resources, while pointing at social programs as the cause of economic ills. Part of this process was to identify the weakest, marginalized groups: immigrants, elderly, sick, minorities and “alternative” lifestyles, and (take note) artists and intellectuals, in other words, most people reading this paper. After vilifying these populations, they become targets for violence by radicals already inflamed by the Twitterverse who burn churches and buildings such as three recent burnings in New Orleans. Barsamian reminds us — we are on the list and doing nothing means no one will remain to speak for us.

As a founder of Alternative Radio Boulder, he points out that all major media is now owned by a handful of entities and, with only a few exceptions, no longer practice journalism. Rather, they have dumbed-down to diversion and infotainment. They have become commercial propaganda channels. Barsamian is not shy about citing parallels to the pernicious rise of Nazism, originally dismissed as a bunch of crazies, but through the passionate and continuous repetition of misleading slogans, entered the minds of listeners and stuck there. Most German citizens “didn’t realize what they were doing.” Outrageous lies and behavior became excused, normalized. Consider for a moment our own local “crazies.”

When I wrote a letter objecting to adoption of the latest Bonner County Natural Resources plan last year, I received a response identifying the word “coordination.” After some research about the special use of this word, I came to find that it was adapted by Cheney to implement policies which give corporate stakeholders a chance to evaluate exploitation opportunities of public assets, like forests, drilling, grazing and mining rights. Consider also the reaction of specific legislators to the Idaho Medicare initiative and further work to prevent limitations on the interest charged for pay-day loans. It is unfortunate to see in my lifetime the concept of good corporate citizenry devolve to corporate cancer in the local and national body. I am not one to go to marches and sit-ins. But I realize that if I am complacent, I am complicit. So now even in normal conversation and letter writing I want to politely say, “I have beliefs which differ from yours” and I support those organizations which represent them.

With that in mind, I am deeply grateful to The Bonner County Human Rights Taskforce, KRFY Radio and the Reader for sponsoring this presentation, which I understand will be posted as a podcast shortly on krfy.org.