While Proposition 1, headed for state ballots this November, has many Idahoans scratching their heads, it’s also inspired vigorous debate among proponents and opponents alike. 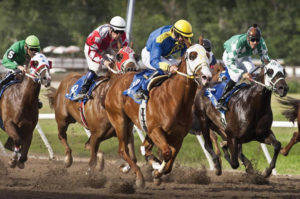 The ballot measure is pitched by supporters as an essential move to bolster Idaho’s struggling horse racing industry while creating jobs and providing tax dollars for education. Opponents, meanwhile, worry the measure could be broadly interpreted to allow an unmitigated expansion of gambling terminals across the state.

The debate centers on the use of historical horse race, or HHR, terminals. These terminals display short clips of past horse races, allowing individuals to bet on the outcomes and providing a more stable form of income for horse racing outfits in the state.

According to the Idaho Secretary of State’s ballot documentation, the Idaho Legislature voted in 2013 to allow HHR terminals at horse racing tracks, and in the subsequent two years, the revenue yields from the machines allowed for an increase from $2,000 to $5,000 in live horse purse prizes per race.

In 2015, the Legislature reversed its decision, which Gov. C.L. “Butch” Otter attempted to veto. Disputes over the veto’s timing cast the legality of HHR terminals in doubt, and since then, ballot documentation indicates that the Idaho racing industry lost over 535 jobs.

Those in support of Prop 1 argue restoring HHR machines would bring back the jobs lost after the ban plus hundreds more, adding up to a claimed $50 million in economic activity. A portion of that revenue would also fund public education. In addition, 90 percent of wagers are returned to bettors, distinguishing HHR terminals from gambling methods like slot machines, which are specifically prohibited in the proposal.

The chief supporters of Prop 1 are advocates for the Idaho racing industry, who led the charge to collect signatures for a ballot measure after they failed to get their concerns addressed legislatively. But they also include libertarian-leaning conservatives like the Idaho Freedom Foundation’s Wayne Hoffman, who argues that the state lottery and government overreach, along with special-interest influence, have gutted a once-flourishing Idaho horse racing tradition.

“Voters (for Prop 1) will throw a necessary lifeline to an industry that deserves better treatment than Idaho’s lawmakers have given it over the past several decades,” Hoffman wrote in an editorial.

Opponents of Prop 1, meanwhile, see more worrying implications for the legalization of horse racing terminals. They believe the allowance of machines wherever racing occurs, regardless of whether or not a race is taking place, as a massive expansion of gambling throughout Idaho, with one location housing 200 HHR terminals before the 2015 ban. They also are skeptical of the public benefits from terminals. A breakdown on the website for Idaho United Against Prop 1, the leading activist group against the initiative, reveals that promoters take a guaranteed 9-percent profit, while .50 percent goes to public schools, .25 percent to the regulatory commission fund, .10 percent to the racing track distribution fund, .10 percent to the breed fund and .05 percent to the Idaho Horse Council.

Tribal organizations throughout the state, meanwhile, see the measure as a threat to its members’ economic well-being.

“It’s absolutely critical that this initiative is defeated. It could have a devastating impact for Idaho’s Tribes and will dramatically cut ongoing investments in Idaho’s public schools,” said Leonard Forsman, president of Affiliated Tribes of Northwest Indians and chairman of the Suquamish Tribe of Washington, in a press release.

Check next week’s Reader for the same analysis of Proposition 2, the Medicaid Expansion Initiative.