To some, an $8 million indoor ice arena in Sandpoint is a welcome concept, meant to increase recreational opportunities for both locals and visitors. For Bonner County Sheriff Daryl Wheeler, it is out of the question for a central reason: location, location, location.

“The jail desperately needs repair and upgrading. Instead, our current commissioners are giving away our public property for recreational purposes,” Wheeler said during a public presentation Jan. 29 at the Kootenai Community Church. “I have a problem with that, and I hope you do, too.” 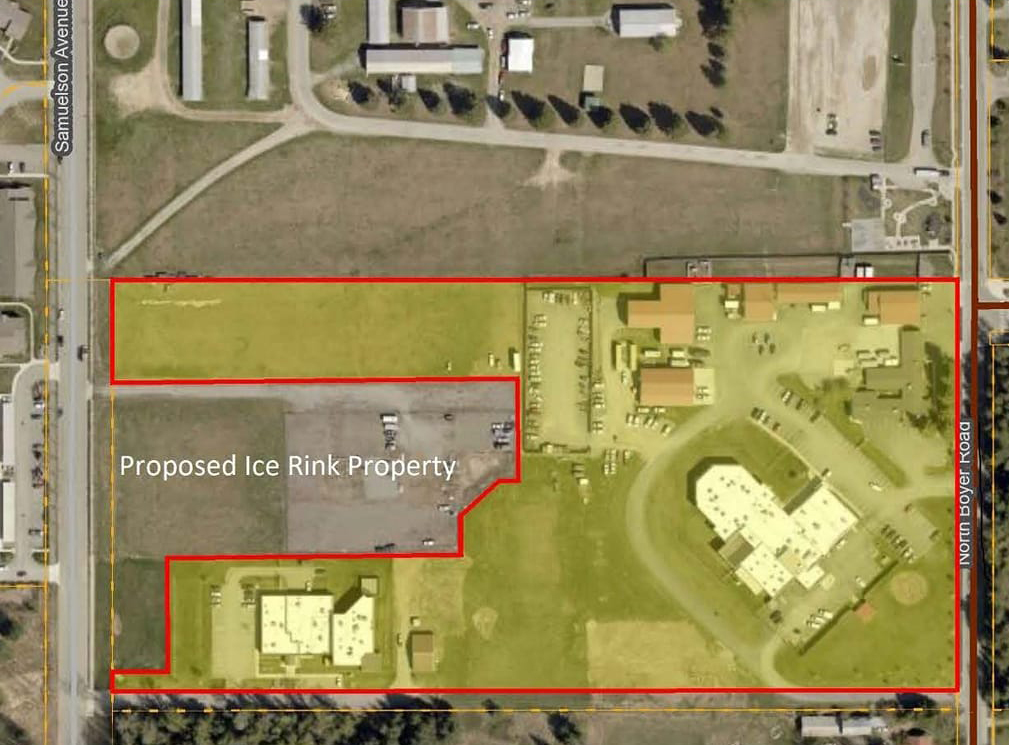 An aerial view of the county property slated for the Sandpoint Ice Arena. Image from a media release on the BCSO Facebook page.

The nonprofit Sandpoint Community Center Corporation, which is heading up the proposed Sandpoint Ice Arena, entered an agreement with Bonner County on Oct. 26 to utilize about four acres of fairgrounds property to construct and operate the facility. The land is located between the sheriff’s complex and fairgrounds buildings and, while mostly vacant, is currently used to store county-owned trailers and other equipment.

Wheeler referred to Oct. 26, 2021 — the day the agreement was signed — as a “disastrous day.” He presented a timeline of the property’s history, and argued that his department’s ability to serve the people of the county “really depends on being able to utilize this property and continue to grow to meet what’s happening in 2022.”

“Currently the commissioners have developed a case of amnesia and don’t seem to recall that conversation we had,” Wheeler said, referring to a workshop during which the jail’s deficiencies were discussed, “and that’s all I’ll say about that.”

Wheeler’s presentation focused on those deficiencies and the inevitable future need to expand the Bonner County Jail — an expansion that Wheeler argues would naturally reach into the proposed ice rink footprint.

A full video of the presentation is available to view on the Bonner County Sheriff’s Office Facebook page.

‘We should have done better’

The Jan. 29 “informational meeting,” as it was advertised on the BCSO Facebook page, is the latest move in a series of challenges by Wheeler attempting to delegitimize the agreement for the ice rink property. On Dec. 6, the sheriff announced that he’d filed a complaint alleging that the commissioners violated Idaho open meeting laws when noticing items related to the ice arena project. On Feb. 1, Bonner County Prosecutor Louis Marshall told the Reader that he’d not yet received a ruling from the Idaho attorney general on the matter.

Since Wheeler first came out against the Sandpoint Ice Arena, Commissioner Jeff Connolly has been candid about his concern that the board didn’t do all it could to ensure the selected parcel would be a fitting location for the facility. Though he voted in favor of the agreement with SCCC, Connolly believes more discussion should take place before any project breaks ground.

“There’s a couple of things that we should have done,” he said, namely, pursuing a discussion with Wheeler, Marshall and other elected officials with a possible interest in expanding the property for the jail or justice services. “We should have done better.”

Connolly said he’s been working to foster collaboration on the issue. When he heard about North Idaho Ice, another local nonprofit with a goal to build an ice arena, he saw an opportunity to unite that group with SCCC.

“I tried to get them to maybe get together with each other and see if there wasn’t a way to work it out that you get the best of both worlds, but apparently those two groups don’t see eye to eye,” Connolly said. “I can’t speak for them, but they have different ideas — let’s put it that way.”

A “notice” immediately appears when visiting the website for the North Idaho Ice nonprofit: “We frequently get a lot of questions about what is going on with the ice rink and the sheriff and we want to be clear, THIS IS NOT North Idaho Ice.”

There are, in fact, two growing movements to bring an ice rink to Bonner County. However, while SCCC is working with the county, NIICE is working with the city of Ponderay to use private donations in conjunction with funds from the city’s 1% local option tax to include an ice rink at the Ponderay Field of Dreams project — a 50-acre, phased parks and recreation complex slated for property off McNearney Road.

NIICE spokesman Tim Wilson told the Reader that while his group and SCCC have similar goals, timing is key for NIICE.

“We really support the other group in theory. Trust me — we’d rather skate on an $8 million ice rink than a $1 million ice rink all day long, but we’re just not willing to put the time in for it,” Wilson said, noting that he has a 3-year-old son who he hopes will grow up with opportunities to skate at an ice arena in Bonner County.

NIICE estimates that the first phase of the Field of Dreams rink — a naturally-chilled ice surface — will be ready by next winter. Subsequent phases, including a cooler unit and eventually a steel structure to cover the rink, are outlined on the group’s website at niicearena.com.

While Wilson said NIICE would be happy to combine resources with SCCC should the Sandpoint group experience a massive uptick in funds and approach construction, he said the Ponderay project seems to be, as NIICE’s motto puts it, the “attainable, affordable, achievable” option for now.

“Honestly, our hope is that when we start to take off and there are skates on the ice, that they will consider reciprocating,” Wilson said.

Representatives from SCCC did not reply to requests for comment before press time.

Despite pushback, as of Feb. 1, the agreement between Bonner County and SCCC signed on Oct. 26 remains in place, according to Fairgrounds Director Darcey Smith.

For Connolly, the next step is going back to the map.

“The next move is to get all the players, all the stakeholders, in a room and try to figure out if this is where we want it and if we want to go forward with it there, or should we be looking … more on the fairgrounds itself as a spot for it,” Connolly said, adding that when he says “fairgrounds,” he means “inside the road that cuts basically along the edge of the portion that they utilize now.”

The board’s weekly business meetings since November have featured repeated requests for a public workshop on the ice rink, conceivably in order for “all the players,” as Connolly put it, to hash out the issue and receive public feedback. Asked Feb. 1 whether a date was set for such a meeting, BOCC office manager and Deputy Clerk Jessi Webster said the board had no meeting of the sort on their schedule.

Still, Connolly is advocating that such a workshop be the best move forward in the case of the proposed Sandpoint Ice Arena.

“I think that we need to have an open conversation about, ‘Is this the best place for it?’” he said.