Following a wet late-September weekend, fire managers report that the two largest blazes in the Bonner County area — the Bernard and Callahan fires — are 75% and 72% contained, respectively.

Crews have worked both fires for weeks, after the Bernard fire sparked Sept. 7 and Callahan fire on Sept. 8. High Labor Day weekend winds whipped the blazes into conflagrations. The Bernard fire, which is human-caused but still under investigation, has reached 1,375 acres burning in steep timber and brush southeast of Bayview at Echo Bay. Crews checked the Bernard fire at its perimeter before the wet weather moved in. Thirty-four personnel are working the fire, as of Sept. 30. 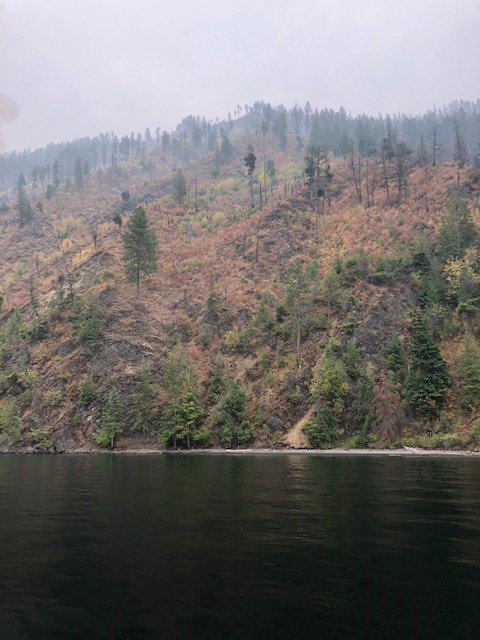 A burn scar from the Bernard fire. Photo by U.S. Forest Service.

The Callahan fire also swiftly grew to 1,276 acres, burning in rugged timber and brush terrain south of Smith Mountain about nine miles southwest of Troy, Mont. on the Idaho side of the border. The cause of the fire remains unknown and under investigation with an estimated full-containment date of Saturday, Oct. 31.

The West Branch Fire, first reported Sept. 16 about nine miles west of Coolin on the Washington side of the border, is 20% contained at 113 acres, as of Sept. 30. A total of 27 personnel are working the fire, which officials reported is minimally active with some creeping and smoldering. The complexity of the terrain has been a challenge, as fire bosses noted that falling snags and burned trees have contributed to the spread of the blaze. Its cause is under investigation.

Weather conditions in the Sandpoint area call for temperatures between the mid-40s and low- to mid-70s through the week with no rain but some haze and fog through the morning of Sunday, Oct. 4.