The golden ticket to fun

About a decade ago, cuts in school funding forced the Sandpoint High School drama and music programs to think outside the box to ensure students’ creative output wasn’t negatively affected. The result was Growing Dreams Productions, a collaboration between Jeannie Hunter, Jon Brownell and Taryn Ann Quayle, which produces notable plays led by students at SHS. In short, Growing Dreams makes certain that the show(s) will go on — and indeed they have.

For its ninth production, Growing Dreams presents Willy Wonka the Musical, a critically acclaimed play capturing the essence of the well-loved Roald Dahl book as it was immortalized by the film Charlie and the Chocolate Factory. The musical will show at the Sandpoint High School auditorium Friday-Saturday, Jan. 14-15 and Thursday, Jan. 20-Saturday, Jan. 22, with doors opening at evening shows at 7 p.m. with a 7:30 p.m. showtime. The family matinee doors will open at 1:30 p.m. and showtime begins at 2 p.m. on Sat., Jan. 15. 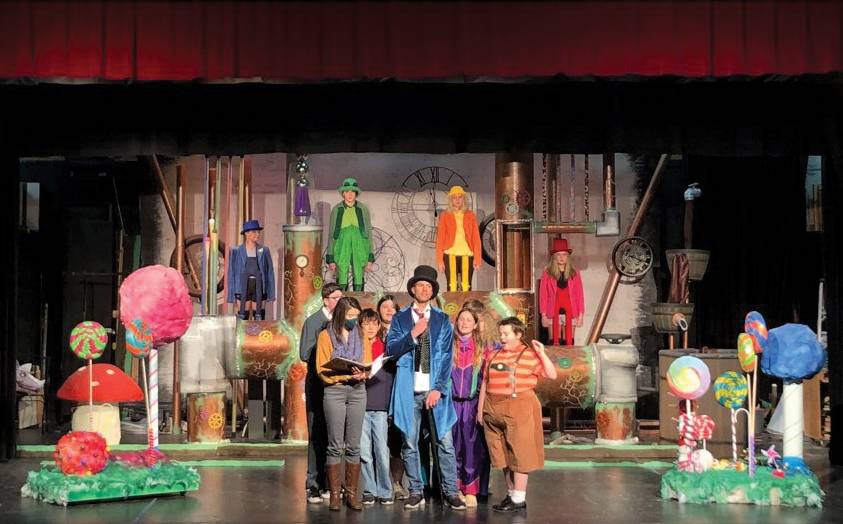 Growing Dreams productions aren’t your ordinary high school plays. Under Hunter’s expert direction, with Musical Director Brownell and Quayle as choreographer, the group truly captures the essence of stagecraft and produces some of the best live plays in the region. Complete with a cast of about 50 students, with another 50 including stage crew and volunteers, their productions feature intricate set design, over-the-top costumes and ongoing musical rehearsals to ensure each production gets the most out of the talented students taking part. Everything, from the opening lights to the final curtain, is operated by students under the direction of an adult.

Volunteer Mimi Fueling said each production serves to remind her why she volunteers for Growing Dreams.

“The kids absolutely love it,” she said. “That’s one of the reasons I’m so happy to be involved and volunteer oodles of time. When you see those kids go through auditions, doing their monologues and singing, it’s wonderful to see their inner strength. Once they get going, it’s an amazing transformation. You really see it when they get into their makeup and costumes. That’s my favorite part: Seeing them transform themselves.”

Fueling said it costs quite a bit to put on productions, with most of the funds going toward securing rights for the music and play.

“The budget for these shows can be around $20,000,” she said. “PAFE [Panhandle Alliance for Education] has been a huge supporter for us. They’ve given us a grant for the last three plays and it’s been a significant chunk.”

When she first got involved with Growing Dreams, Fueling said she was blown away by the caliber of talent shown by the students.

“It’s incredible what these people and volunteers can do,” she said. “The singing is top notch and the costumes are just amazing.”

During the 2018 production of Shrek, for example, Fueling said the crew brought in professional prosthetics and makeup. It was during Shrek, in fact, when the power failed during the final scene due to a malfunction with a smoke machine.

“The kids ended up finishing the last scene of the play on the picnic tables outside, with the audience around them,” she said. “They sang and when they were finished, they had the biggest ovation of all those shows.”

Tickets are available at ticketor.com/growingdreamsproductions, but don’t delay as Growing Dreams productions often sell out. With ticket prices set at only $12, it’s a sweet deal to attend Willy Wonka the Musical — as much for the stellar acting as the high production value involved.

“You should see the kids’ faces when I walk backstage and tell them they have a sold out show,” Fueling said. “They love playing to a packed house.”