Off the wall in paradise

Greiff’s paintings are currently on display through the end of June at Monarch Mountain Coffee, located at 119 N. First Ave. There are more than 30 pieces on display at the downtown Sandpoint coffee shop and many more in his portfolio, said Greiff, whose work features creatures of many types, populating portraits and iconic paintings brimming with social commentary.

“I like the fringes of society,” Greiff told the Reader. “I get a lot of inspiration listening to people’s stories who are drug addicts or have harder lives and are living on skid row. I also get a lot from music. I’ll listen to a song and say, ‘Holy shit, I gotta paint this.’ I’ll see an image and try my best to paint it.” 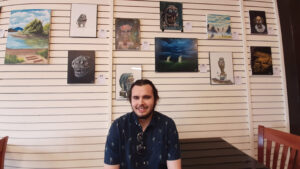 Jacob Greiff stands before several of his art pieces on display at Monarch Mountain Coffee. Photo by Ben Olson.

There is no all-encompassing theme behind Greiff’s work, but many of his pieces employ a similar style to the unflinching grittiness of early-20th century German artist Otto Dix and the subversive cartoons of American underground comix pioneer Robert Crumb, both of whom delved into taboo subjects and risque satire. In the vein of Dix and Crumb, Greiff’s paintings focus on the grotesque and distorted to draw out deeper meanings, at the same time serving as a counterpoint to much of the nature-inspired art seen around the region.

Greiff said he got into art at a young age as a way to manage his nystagmus, an eye condition he’s had all his life.

“The best way to summarize it is, my normal vision is how drunk people see,” he said. “When you get drunk, you get nystagmus. That’s what the cops are looking for when they do the pen test. I’m super blind and my eyes constantly shake.”

As a kid, Greiff said he often felt ostracized by the condition, which opened the door to creating art.

“It was hard to make friends, so I’d always be drawing,” he said. “To be poetic about it, I was making my own friends. I was drawing Mario and monsters and stuff. I was always drawing because it was the only thing I could control how I could see.”

With practice — and a lot of hard work — Greiff found he had an artistic voice that differed from the subject matter he saw typifying much of the work produced in Sandpoint, where he was born and raised.

“Anyone can paint trees,” he said. “Anyone can look up a Bob Ross video and watch it. I’ve definitely done that. I guess I just want to stand out, especially here in Sandpoint. There’s so much amenity art here. Everyone just wants a picture of the lake because that’s what’s going to sell. I don’t want to do that.”

Like many artists born in small resort towns in the West, Grieff has a love/hate relationship with his hometown.

“For my interests and my path, Sandpoint allows me to create art because there’s nothing to do,” he said. “You either do three things if you live in Sandpoint: you’re rich… you like nature… or you become a drug addict or alcoholic. That’s pretty much it.”

Monarch Mountain Coffee owner Sherrie Wilson said the coffee shop has displayed local artists’ work for many years, but since moving into a new space on First Avenue, she has increased the art shows to last 60 days each.

“We selected Jacob’s for display because of his exuberance for art,” Wilson told the Reader. “He has been a regular at Monarch Mountain Coffee and I don’t remember a visit that we didn’t chat about his painting, what he is currently working on and how much he enjoys painting and growing himself as an artist. I expect one day we will all be kicking ourselves for not snapping up his signed originals when we had the chance and we will brag that we knew him when he was just getting started.”

Greiff’s process isn’t set in stone, he said, but fluctuates with whatever inspiration strikes at the moment.

“Sometimes I just start painting and what comes out, comes out,” he said. “That’s what true art is to me; just letting things out in the present moment.”

Check out Greiff’s work at Monarch Mountain Coffee (119 N. First Ave.), where it will continue to hang until June 30. For artists seeking an outlet, stop by or call the coffee shop and make sure to have 20-30 ready-to-display pieces. They are currently scheduling shows for 2023.