Three summertime pineapple drinks, with a little history for garnish

Few fruits can claim such iconic status as the pineapple. Cultivated for centuries — maybe millenia — by the peoples of South and Central America, Mexico and the Caribbean, it is indigenous to the lands surrounding the Paraguay and Paraná rivers, which today encompass Argentina, Brazil and Paraguay. Even with its ready availability to the civilizations of the Americas, they treasured it, with the Caribs calling it nana, which roughly translates to “excellent fruit,” and provides the root of its scientific name, Ananas comosus. Throughout the regions where it was grown, people ate it, used it for medicinal purposes, employed its fibers to make clothing and strings for their bows, and fermented it for strong drink. 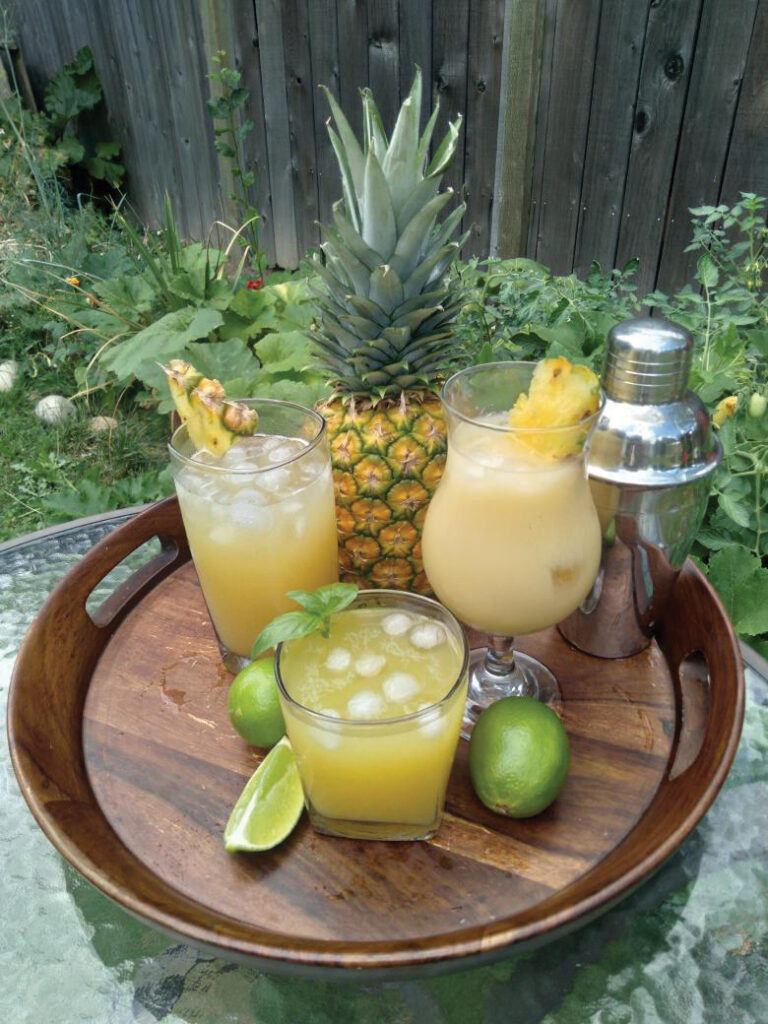 As with so much in the so-called “New World,” the pineapple captured Europeans’ imaginations immediately upon encountering it. Christopher Columbus in 1493 noted the fruit’s passing resemblance to a pine cone and dubbed it piña de Indes — “little pine of the Indians” — going on to rave that it was “the most delicious fruit in the world.” Subsequent Spanish chroniclers wrote that it was worthy to be eaten by kings and called it “the prince of all fruits,” according to the Smithsonian.

So enamored of the pineapple were Europeans, that they immediately tried to figure out ways to grow it back home — with little success. The fruit therefore remained a rarity outside its native growing climates for hundreds of years, and as the system of slavery extended its malevolent grip on the Americas, it became emblematic of the riches and luxury that flowed to those who benefited from the trade in human beings.

According to many sources, a single pineapple could cost the equivalent today of $8,000 in the northern colonies of British-America, making the pineapple an early status symbol. The lavish tables of the aristocracy were covered in all manner of delicacies plundered from the slave islands of the Caribbean, but the pineapple was perched on top — not to be eaten, but to be admired by guests as a reminder of the wealth and power of their host. If the grandee wasn’t quite as grand as they wished to appear, they could rent a pineapple for the night, displaying it at the table and sometimes mingling with it under their arm — sort of like a designer purse dog, today.

The richest colonials commissioned paintings of pineapples to be hung in their homes, they had pineapples carved into the ornate legs of their furniture and Earl John Murray of Dunmore — the last British governor of Virginia — even had the roof of his vacation house in Williamsburg topped with an enormous stone-carved pineapple.

According to the official records of George Washington’s home at Mount Vernon, the first president of the United States was particularly smitten by the fruit, writing that “none pleases my taste as do’s the Pine.” The famously rich Virginia slave owner underscored his wealth by prevailing on the ship captains who supplied his plantation with goods from the Caribbean to come back with as many as three dozen or so of the outrageously expensive treats at a time.

Given that long, and often unsettling, history, it’s ironic that the pineapple is today considered a little cliche — and certainly no luxury. The bigwigs of early America might have shelled out $8,000 in today’s money for one of these juicy fruits, but I picked one up for $4.98 (before tax) the other day at Super 1. It was with that that I decided to mix up a couple of pineapple-based summertime rum drinks (rum, of course, being the other notorious export of the Caribbean), because I agree with the Caribs that it is the “excellent fruit.”

Combine the rum, juices and simple syrup in a shaker filled 2/3 with ice, shake, and pour over ice in a tall glass. Top with club soda and stir, then drop in the pineapple spear.

There are a lot of planter’s punch recipes out there — my Old Mr. Boston bartenders guides from the 1930s and ’40s call for the addition of things like bitters, orange, curacao and cherries — but I landed on this utilitarian one from my Williams-Sonoma bar book.

As much as it aggrieved me to drink anything with “planter” in the name, I have to admit this one is the winner. It tastes clean and crisp, with the rum shining through. I must admit, I ignored the simple syrup, as pineapple is plenty sweet as it is, which allowed the grapefruit to mingle with the club soda and offer it a refreshing brightness.

Put the rum, basil sprigs and lime rounds into a shaker and muddle well, then let sit for about 1 minute. Strain the mixture into a tumbler over ice, stir and garnish with more basil. Easy.

I found this recipe on thetoastedpinenut.com, and was not disappointed. The basil both lightens the sugar notes of the pineapple and softens the bite of the lime. A whiff from the garnish as the drink is going down was a pleasant surprise, adding a bit of fresh garden scent to the whole production. If you want to get more creative, I added a bit of seltzer and a few drops of grapefruit, essentially creating a basil planter’s punch, which was pretty darn successful.

Put all the ingredients into a shaker 2/3 full of ice, shake and strain into a fancy ice-filled glass. Then add the garnish.

That’s the “official” method, but I figured I’d try out a pre-mix just for fun. I picked a 15.2 oz. bottle of Naked brand piña colada mix, which features pineapple, apple, orange and lemon juice, along with coconut milk and banana puree. It didn’t pan out too well. The banana made things feel a little mushy, and with 50 grams of sugar per serving, its cloying sweetness masked both the rum and coconut. Best to go the extra mile and make your own mix.