Two-wheeled warriors of America take heed, Idaho is about to join the movement. U.S. Bicycle Route 10 (USBR 10) will officially open following a ribbon cutting Friday, Oct. 9 at 2:00 p.m. at Farmin Park in Sandpoint. 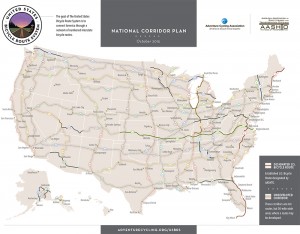 USBR 10 marks the first U.S. Bicycle Route established in Idaho and one of the newest additions to a national network of scenic bicycle routes that extends throughout eighteen states and totals nearly 9,000 miles.

The National Bike Route system goes way back to the 1970s, when a group of bicycling advocates successfully established the first routes in the east; U.S. Bike Route 75 and 1, both passing through Virginia.

The web of routes has traveled a long way since the disco days, holding strong to the goal to connect the entire United States with a system of National Bike Routes.

USBR 10 is just one leg of the full east-west leg, dubbed the Northern Tier, which travels from Anacortes, Wash. to Bar Harbor, Maine.

For Adventure Cycling Association, based in Montana, bikes are more than just transportation. They’re a way to connect people across a vast network of routes. The organization has spearheaded efforts to establish new routes across the U.S. and maintain those already in place.

According to Snow, once the national corridor plan was established, it became a planning guide to help states identify interstate connection.

“If you want to start in Maine, you can find out which routes will take you down to Florida,” said Snow. 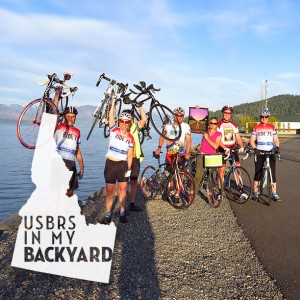 The process for identifying and designating these routes gets lots in the bureaucracy, but essentially, when a new route is proposed, a matrix of partnerships and outreach helps to establish that the route is safe for bicyclists, as well as meets the approval of the municipality or county that may own the road it travels on. A final step involves approval from the National Department of Transportation Secretary.

“In general, bike touring routes tend to favor quiet roads; generally rural back roads … and scenic routes,” said Snow. “Especially in the case of smaller communities, we’ve seen economic studies that these routes help with economic growth within that community.”

Because touring bicyclists travel slower than motorized tourists, they tend to spend more time, and therefore, more money as they travel through a given area.

“The hope for designating U.S. Bicycle Routes is that as the roads are officially recognized and signed, there will be more recognition that the roads are being used by bicyclists, therefore making them safer so that motorists will know to look out for cyclists on the road,” said Snow.

The U.S. Bicycle Routes are working to establish universal signage that is recognized across the country. Wherever you come across a green sign with a bicycle logo and the route number, you can safely assume you’re on the national route.

For more information about traveling the U.S. Bicycle Routes, including guides, maps and technical info, visit www.adventurecycling.org. The ribbon cutting will take place at 2:00 p.m. at Farmin Park in Sandpoint on Friday, Oct. 9.