The politician who cried ‘big government’

Images of an Orwellian dystopia are often evoked when we hear the term “big government.” The mere uttering of the phrase can function as a negative stimulus — boiling our blood and striking fear and anger into our hearts. The concept of “small government,” by contrast, is typically associated with more positive sentiments — words like “freedom,” “liberty” and “individualism” come to mind. Consequently, with a small government vs. big government dichotomy, many people naturally assume that reducing the size and scope of the federal government or, in layman’s terms, “getting the government off our backs,” is the most viable solution to the social and economic problems we face. 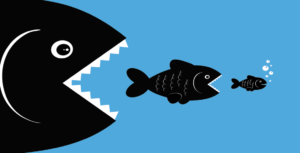 Notwithstanding the importance of the small government vs. big government debate, we must also consider the many other equally relevant questions: What type of government do we want? What kind of society do we want to live in? Indeed, the matter in question isn’t simply an issue about the size of the government; it involves a discourse concerning whose interests the government is and/or should be serving. Moreover, we must also be mindful of how the political framing of these issues can affect our logical reasoning and ultimately determine how we choose to answer such questions.

This framing has been demonstrated to be an effective way to convince people to vote against their own interests. By comparing something the voters may want with something that scares the bejesus out of them, they can be effectively manipulated into opposing legislation which would actually benefit them. It’s sort of like a red-baiting version of the transitive property: if A = B and B = C then A must also equal C, right? If one can equate, say, universal health care with socialism, and socialism with communism, then wanting universal health care would be tantamount to wanting Stalinism or Maoism.

Just as cunning as their conservative counterparts, there are some on the political left who have a diametrically opposed version of this type of rhetoric; conjuring up a stateless “Mad Max” kind of world that we’ll all be living in if conservatives have their way.

There are, of course, some honest actors in the political arena who are making a legitimate case against the threat of big government and overregulation (all large institutions, be they public or private, must be questioned and challenged); however, in other cases, the politician who cries “big government” — like the boy who cried “wolf” — does not, in fact, observe any real threat, she or he is merely attempting to use fear mongering to deceive and manipulate the rabble.

Think of it as trickle-down propaganda: the sophistry begins at the top, eventually trickles down to the poor and middle class, and culminates with a destitute and indignant senior citizen holding up a sign reading, “Get your government hands off of my Medicare!”

Pull back the curtain from the notorious “B.I.G. government” stage show and what will you often find? A big corporation, or maybe two or three big corporations — “campaign contributors” who employ our senators and congressmen to lull us to sleep with laissez-fairy tales and red-scary ghost stories.

Governments can, no doubt, have a detrimental effect on individual liberty so we must remain “eternally vigilant.” Our vigilance is impotent, however, unless we are willing to assail all manifestations of power and corruption. An unchecked corporation with unlimited power and control over our lives can become just as big a threat to our individual freedom as an unchecked government.

In an ideal world, perhaps one that is governed by our better angels, the free market economy would be a self-regulating entity and  there would be no cause for so-called “red tape.” Unfortunately, history has shown us, time and time again, that we do not live in such a world. It was not the invisible hand of the marketplace, nor was it “voting with our dollars,” that put an end to child labor — it was legislation like the Fair Labor Standards Act of 1938. Furthermore, it will not be the free market that will help to bring down the cost of health care or resolve the planetary crises we face. The solution to some problems can only come from the public sector. The free market may produce goods and services more efficiently than any other system; however, when it comes to issues like health care, the environment and the justice system, the free enterprise system falls woefully short.

Government is the only mechanism that we currently have that can offset the forces to which unbridled capitalism inevitably gives rise: concentrated wealth, the exploitation of workers and the destruction of our environment.

When regulated, those who profit from the aforementioned will, as expected, cry, “big government.” But, to put it simply, one man’s “big government” is another man’s life-saving medical care; one man’s “tyranny” is another woman’s right to not be sexually harassed at work; and one corporation’s “government overreach” is an entire planet’s salvation.

But what about the economy?

When corporations, along with the politicians they fund, tell us that government regulations are bad for business, it’s a bit like a cat burglar telling us that “deadbolts” and “sirens” are bad for business. Perhaps it may be bad for their business; nevertheless, it’s still a good idea for us to have locks and alarm systems in place.

As we extend our outlook beyond the narrow scope of short-term profits and economic growth, we will discover another phenomenon that’s bad for business: destroying ourselves, wholesale, as we foolishly kneel in acquiescence before the marketplace and recklessly pursue money and power.