“You never change things by fighting existing reality. To change something, you build a new model that makes the existing model obsolete.”
— Buckminster Fuller

In 2009, Mark Jacobson, a professor of civil and environmental engineering at Stanford University, first described a plan for obtaining 100 percent of the world’s energy without relying on fossil fuels or nuclear energy.

The plan included not just electricity, but all forms of energy used for heating, cooling, transportation and industry. Since then, this same group has published blueprints for 100-percent clean energy for 139 different countries, and all 50 U.S. states. These, as well as many studies by other groups, have concluded that there is way more solar and wind energy worldwide that can economically be developed than we will need, taking into account increases in global population and living standards. Wind and solar energy are also available all over the world, and are particularly abundant in many developing nations that need more energy. 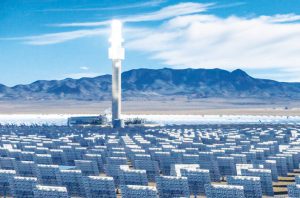 What’s more, there is a huge savings by eliminating all the energy required to extract or mine fossil fuel, refine and transport it. Also, in many cases, electricity can be used more efficiently than fossil fuels. For example, only 17 to 20 percent of the energy in gasoline is used to move a vehicle (the rest is wasted as heat), whereas 75 to 86 percent of the electricity delivered to an electric vehicle goes into motion.

The main challenge is that the wind doesn’t always blow and the sun doesn’t always shine in a given location. For a reliable electricity supply, the amount available at any given moment must match the demand at that moment. There are several strategies that can be combined to address the issue of intermittency. Part of the solution is to balance intermittent solar and wind power with other steadier, clean energy sources such as hydroelectric, geothermal, wave power and biomass. We also need to enhance the capacity of our transmission grid so that geographically dispersed sources can back up one another. When the wind isn’t blowing in one area, it will be blowing somewhere else. The areas with the greatest renewable energy resources need to be connected to the population centers where demand is the greatest. For example, in the U.S., the enormous wind resources of the great plains could be used to power urban and industrial centers in the midwest, while solar energy from southwestern deserts could be transmitted to cities in that region. The majority of the U.S. population lives close to the ocean or great lakes, which have an enormous untapped potential for wind and wave power, while the geothermal energy resource of the western U.S. is also largely untapped. Taking advantage of these untapped resources requires an equally ambitious coordinated expansion of our electric power grid. Another important strategy for dealing with intermittency is to store the energy produced during times of surplus production. There are already instances when favorable weather conditions have resulted in excess wind and solar generated electricity being wasted, while, at times of peak demand, we have been relying on fossil fuel backup. Local storage of surplus energy, in many cases, may be more efficient than transmitting electricity over long distances. The need for energy storage will increase as more fossil fuel is replaced by solar and wind.

At present the most widely used method of energy storage for producing electricity is pumped hydroelectric storage. These are hydroelectric plants which use pump turbines that are capable of using the mechanical energy of flowing water to either generate electricity or to pump the water up from a lower reservoir to a higher reservoir. If there is surplus power on the grid, the pumped storage power station switches to pumping mode. If the demand for electricity in the grid rises, water is released from the upper reservoir causing the pump turbines to spin, which in turn drive the generators. Within seconds, electricity is generated and fed back into the electricity grid. Thus, they are able to react in the shortest possible time to grid frequency fluctuations. The facility at Northfield Mountain in Massachusetts, which has been operating for 45 years, features a five billion gallon reservoir on top of the mountain, and an area known as the “batcave,” tunneled into the mountain 750 feet below. It houses the pumps and lower reservoir. The facility was designed to go from zero to 1,168 megawatts (MW) in 10 minutes, and keep generating at that rate for eight hours. As an example of a novel application of pumped hydro storage, General Electric is building a facility in Germany that uses wind power to pump water up to a storage chamber located inside the 800-foot-tall wind turbine towers. When the wind stops, water flows downhill to generate hydroelectric power. A man-made lake in the valley below collects water until turbines pump the water back up again.

Surplus electricity from photovoltaic panels and wind turbines can also be stored in batteries. So far, this is a more expensive way to store large amounts of energy, but that could change. Elon Musk, the guy who will soon be offering tourist travel to the moon and selling real estate on Mars, has just built the world’s largest factory of any kind in Nevada. It will produce 35 gigawatt hours worth of lithium ion batteries / year, with the goal of bringing down the price of these expensive items. The market for these is not just Tesla cars. A massive gas leak in late 2015 and early 2016 outside Los Angeles led to a fear of energy shortages throughout southern California. Tesla built a 80 MWh battery storage plant nearby in just three months. Thanks in part to California’s crisis, but also improving economics and new state policies, battery storage technology is preparing for unprecedented growth in the United States, with a predicted 800-percent increase over the next five years. There are also new technologies in the works, such as organic flow batteries, which should eventually be much more economical than the current lithium ion batteries.

For concentrating solar power plants that use heat energy to produce electricity, it is much more economical to store the heat than to use batteries to store electricity. These units use an array of mirrors to focus sunlight from a large area onto solar collectors containing a heat transfer fluid. The heat from this fluid is used to generate steam, which is fed to a conventional turbine to produce electricity. The stored heat can be used to generate electricity at night and during cloudy periods. The rate can also be controlled to meet demand, rather than being subject to fluctuations in sunlight. While some units use water and steam to collect and store thermal energy, a new method involving phase change between liquid and solid phases, using a mixture of molten salts, is more economical, in that the volume of the storage tanks is greatly reduced, and the need for high pressure tanks is eliminated. A 110 MW Crescent Dunes Concentrating Solar Power Plant in Nevada, featuring this technology, was completed in 2016, and is now operational.

There is so much more to say about the coming green economy, but I’m running out of space. Please stay tuned for future articles in the Reader.