I have written before about when, with fellow USAF draft dodgers in Georgia and later with jolly collegians in California, we harmonized our way through the early 1950s. Or tried to.

What I haven’t mentioned was our curious custom of belting out songs from and about the first world war. Decades before any of us beer-besotted vocalist wannabes were even a gleam in someone’s eye. Yet there we were, booming out with passion songs popular forty or more years earlier, 1914 through 1918. The soundtrack to an estimated 10 million killed in “the war to end all wars.” 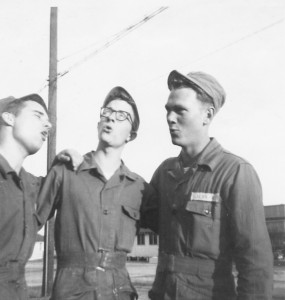 “Over There.” “It’s A Grand Old Flag.” “Mademoiselle From Armentieres.” “Pack Up Your Troubles In Your Old Kit Bag.” “There’s A Long Long Trail A Winding.” “For Me And My Gal.” “How Ya Gonna Keep ‘Em Down On The Farm (after they’ve seen Paree?)”.

The first two were  components of a rousing medley of George M.Cohan tunes that included “Give My Regards To Broadway,” and “Harrigan.”

My mother’s maiden name was Harriman. Her father, Dr. T. G. Harriman of Long Beach, Ca., taught her and her little sister to sing Harriman instead of Harrigan. And they did, right through their reckless 1920s flapper years, and beyond. When I was growing up it was not unusual of a Saturday evening to find the inviting, expansive, step-down living room in the family’s tile-roofed, Spanish-style early SoCal homestead brimming with friends and relations. Fortified with bourbon old fashioneds they bellowed out “Harrigan” then segued into other compatible George M. Cohan tunes.

Years later I taught those songs to fellow non-combatants in Georgia piano bars while holding the North Koreans at bay. And later, as noted, those rousing lyrics were shared with collegians in California. The most stirring of World War I songs, though, was none of the above.

Somewhere in far-off Scandinavia an elderly couple kept a pet rary. A large, ambling animal resembling a small elephant, the rary developed a fatal disease. A veterinarian advised euthanasia. The grieving couple lived near a high cliff. They decided the most humane way to end their rary’s life would be to shove it over the cliff as it was happily munching grass. In tears, the husband prepared to push it over. Suddenly his wife wailed, “No!  It’s a long way to tip a rary!”

“It’s A Long Way To Tipperary” is a British military marching song from 1914. More importantly, it’s one of the most energetic tribal bonding songs ever sung. Especially with banjo and piano accompaniment and maybe sawdust on a barroom floor in the early 1950s. Back when regular folks sometimes just stood around singing songs. With no computers, Twitter, violent video games, Facebook or reality TV, what else could we do?

If early 1950s songsters’ fascination with World War I tunes  was inexplicable, our fondness for Roaring Twenties hits was less puzzling. The jazz age. More oomph. “If You Knew Susie.” “Margie.” “Sleepy Time Gal.” “Five Foot Two Eyes Of Blue.” W”e’ll Build A Bungalow (Big Enough For Two).” “Baby Face.” “I’m Looking Over A Four Leaf Clover.” Maybe it made us feel at one with the rakish coonskin coat crowd. The gin-filled silver flask and Stutz Bearcat-driving generation that preceded us. The Great Gatsby gang. Much of which, but not all, was mythic.

Reader readers reading previous columns by this writer about raucous songfests, collegiate anthems on the beach at SoCal’s Dana Point before it became a housing development, might conclude he was a wretched hedonist. A wastrel. A kinder assessment is that he pursued a less conventional academic route to adulthood. In school I cunningly sidestepped the difficult subjects necessary for later prosperity and happiness. No physics, trigonometry, Latin, chemistry or statistics. No sir. In high school I majored in producing and emceeing student body assemblies. In college, producing and emceeing student body “spring sings” and homecomings. I ought not admit it, but it paid off.

Years later, midway through an agreeable corporate journalism career in NYC, a spontaneous songfest erupted one evening among a weary cadre of attendees after a day-long conference in Princeton, N.J. As had happened years before in Georgia and California, I found my fellow Hq. staffers looking and listening to me for lyrics. Among them was C.L. “Charlie” Brown, CEO of our employer, AT & T,  parent company of the Bell Telephone System and then the world’s biggest corporation.

I had worked with Charlie (yeah, just like that other Charlie Brown, although it was in one’s best interests not to cite the comparison) on speeches and related projects. So I knew him. But singing the old songs made us buddies. Charlie and his gracious wife, Annlee, were corporate social creatures, hosting black-tie parties in NYC’s most luxurious ballrooms and private clubs whenever a board member or senior officer retired. In large measure because Charlie, Annlee and I knew the same old songs, I became the party strategist. In addition to my usual, less intoxicating corporate chores.

These parties always centered around music. If the honoree was a Yale alum, for example, I’d bring Yale’s singers down from New Haven to perform “The Whiffenpoof Song.” With an extra verse of personalized lyrics. Once, to teach grumpy engineering and business brass how to move and shake their booties dancing “The Super Bowl Shuffle” (don’t ask) I brought in Willie Gault, the 1986 Super Bowl champ Chicago Bears’ wide receiver.

Most memorable for me was the final Bell System Presidents’ Conference, at Arizona’s Wigwam Resort after the 100-year-old business had been shredded by the Reagan administration. My plan for the program’s sentimental close featured Charlie and Annlee Brown onstage, house lights dimmed, singing “Thanks For The Memory.” For reasons I can’t recall, quite possibly emotion, Charlie told me to pinch hit for him and sing the duet with Annlee. I did. Some in the audience of 150 corporate tycoons and spouses, corporately together for the last time, actually wept. It was 1984. Could that happen in Big Business today?

Parties weren’t in my job description but of the many jobs I had over the years I liked that one best. It was emceeing those high school assemblies, singing in those Georgia piano bars, and belting out the oldies at California beach parties jelled into one. Charlie Brown once asked me to jot down the words to the Johnny Long Orchestra jive arrangement of “A Shanty In Old Shantytown” and its flip side, “Blue Skies.” I did, on the spot. Not once did he ever ask me about calculus. Or even geometry. Thank God.

There’s a lot more music around today than then, and by musicians who know what they’re doing. On weekend nights, for instance, Sandpoint rocks with local talent. In yesteryear pop songs were recorded by celebrity singers and bands. Ordinary schmucks like me bought their records and sang their songs at parties, in cars and around campfires. We prided ourselves on imitating Frankie Laine doing “Black and Blue” and “That’s My Desire.” And Nat Cole’s “Walkin’ May Baby Back Home.” And “Vaya Con Dios” by Les Paul and Mary Ford. We danced to our musical heroes and heroines via Wurlitzer jukeboxes.

Today nobody stands around, shoulder to shoulder, imitating Beyonce, Jay-Z, Adele or John Legend. Why should they? Every fourth person has a band or is in one. In 60 years we’ve come from pop music lemmings to pop music leaders. That’s undoubtedly good.

Still, it was fun when people just sang. Not well, but with feeling. Not for applause and acclaim. Just for the joy of it.