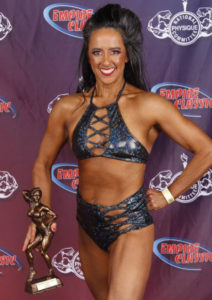 LaBarbera answered some questions about her training process and shared a few post-show thoughts.

What is the NPC fitness routine?

The fitness section is a two minute routine sequenced to music that is designed to show strength, cardio stamina and flexibility. The required moves are a straddle hold, high kick, push up and split. Everything else is up to the competitor.

For my routine, I included a one-arm pushup, side aerial, handstand pirouette, elbow planche and a really well-executed straddle hold sequenced to a Led Zeppelin and Pretty Lights mash-up. I wasn’t planning on doing the aerial, but decided to put it in a couple minutes before the show. Stuck the aerial in both performances.

Have you ever done a show like this before?

I seem to do one about once a decade. This one is to celebrate my 50th birthday.

What draws you to  fitness routine over the other portions of the NPC competition?

The physicality and the athleticism of the fitness routine. Don’t get me wrong, the women in the bikini categories are in fantastic shape – they work hard to look the way they do. But I wanted to be judged on my ability rather than my look.

So, I chose to train for the routine over the bathing suit portion. I’m not about the whole beauty pageant business. I’m like “Can I still climb that route? Can I still bike up that mountain? Can I still ride that line? Can I still stick that aerial?” And it turns out, the answer is yes!  I still move like a gymnast.

This competition takes a considerable amount of training. What did that training look like?

Life is chaotic.  You only have control of yourself. And training is a way to harness your focus and energy. Having that goal and firm deadline to aim for helped keep me on track.

The first step was to build overall muscle pretty much everywhere. Then, I moved to targeting specific muscle groups. Each day, I would focus on a body part — legs, back, chest, arms, shoulders and abs. Then sprinkle in some full body days — TRX suspension training, Pilates on Reformer or Plyometric exercises on the floor. I don’t have barbells or weighted cable machines in my studio, so I adapted the workout with free weights, bands and Pilates machines.

I was eating clean for three months prior to the comp, but at the end, I did a 10-day carb cycling cut that was pretty intensive. Right now, I’m tip toeing back towards a more sustainable diet and trying not to over do it.

What went well during your training this time around?

I was way more structured with my nutrition than I ever have been. The weight lifting went smoothly. I was consistent and stuck to the plan.

What happened during training that was out of your control?

My elbow was geekin’ out and prevented me from lifting very heavy, but I found work arounds for that.

A positive thing that wasn’t really in my control was how excited my clients and friends were for me. I had training buddies leading up to the event and a bunch of my friends came down to Spokane to watch the show and take me out for Mexican food afterwards.

Your first place win qualifies you to move on the National Physique Committee’s National Championships. Are you going?

I don’t know when or where the championships even are. I just haven’t given it any thought. I might be open to it — we’ll see. I’m taking this week off and celebrating. Feel free to buy mug #89 at Eichardt’s a meal, if you would like to help me celebrate.

About James LaBarbera: With a background in Pilates, dance and gymnastics, James is serious about posture and body mechanics. When she is not training clients, rippin’ Schweitzer, riding mountain bikes, paddling rivers or dressing up rad, James can be found hanging with her family at the Eichardt’s C-Bar.