The Sandpoint Eater: Get out of the kitchen

I’m heading to Chicago soon and, while my primary purpose is serving as a booth host for Tahiti Tourism at the Travel and Adventure Show, I can hardly hide my excitement (and good fortune). The travel show overlaps with the 13th annual Chicago Restaurant Week. Talk about icing on the proverbial cake! I’ve already scored coveted reservations at a couple of my favorite eateries: Sepia and Hutch American Bistro.

Back in the days of attending fancy food shows to search for new and interesting food products for my well-heeled (and well-fed) clients, I discovered Restaurant Week in Chicago, and I’ve attended most of them since. People often ask why I would leave the snow and cold just to head to more snow and cold. Really? If the airport is open, there’s no weather that can keep my taste buds away from this annual gastronomic pilgrimage.

I’ve also been lucky enough to pull up a chair at the table in other great cities, like San Francisco, Seattle and New York, to experience their week of restaurant mania.

Restaurant Week was the brainstorm of Tim Zagat (of the restaurant guide fame) and Joe Baum (restaurateur of the World Trade Center’s Windows of the World). The first event was held in New York in 1992. They planned it to coincide with the Democratic Convention, mostly to be sure the city was able to efficiently feed throngs of reporters with fabulous, prix fixe food and pricing. It was wildly successful, and the concept has since worked its way west to other major cities. Now, you’ll find some version of restaurant showcasing almost anywhere you can buy a bite to eat.

These events provide varied dining experiences, but the concept is the same. Often, restaurants partner with chambers of commerce or tourism offices to show off not only food but destinations and special events happening in their respective locations. Prix fixe menus, specialty items, contests and special pricing are often the lures to get you in the front door, and restaurateurs count on gastronomic fare and fantastic service to keep you coming back.

I am such a creature of habit that I rarely try anything new when eating locally, relying instead on my favorite dishes at my favorite eateries. I am confident to say I have probably eaten liver and onions at the Hydra more times than anyone else who’s ever crossed their threshold. Other tried and trues that top my local repertoire include The Hoot Owl’s green eggs and ham, curried chicken salad at Tango, salt and pepper (bone-in) wings at Sweet Lou’s, Fiesta Bonita’s chili relleno, calamari at McDuff’s, Thai Nigiri’s Panang curry, corn and crawfish chowder with a grilled Caesar at Trinity, Ivano’s lasagna, and fish and chips at Eichardt’s. I often intend to be adventurous, but rarely do I try anything else scribed on the menu or even the promising specials, proudly pitched by pleasant servers.

That’s not to say I don’t have an adventurous palate. To me, a favorite part of traveling is experiencing the sights, scents and tastes of new foods. Whenever I go, I eat whatever dish is presented by the host (more than once, I was extremely grateful it was served with copious amounts of alcohol).

That’s why l look forward to Restaurant Week — so many sensational foods that otherwise might not have floated past my eager palate: ballotine of pheasant, buttery foie gras with pineapple coulis, poached tangerines, apple and celery root soup and mussels roasted with Thai sausages. I admire the chefs who go boldly into the kitchen, fusing techniques and ingredients, hopeful they’re creating the next James Beard award-winning dish.

We’re not short of great chefs and restaurateurs right here in Sandpoint. I know from personal experience that it’s not an industry for the faint of heart. After food and labor costs, there’s not much left to cover overhead (or emergencies, like a failed piece of crucial equipment), let alone a profit. Keep an eye out for local, dine-around promotions, because I heard a couple eateries are cooking up some great deals! Get out of the kitchen — visit your favorite eatery or venture out for a new and different experience and sample something that will surprise and delight your taste buds.

Besides my local dine-out preferences, I also have a favored dish or two that I habitually prepare at home to comfort and nourish me. Stirring up a big hearty batch of New England clam chowder is guaranteed to warm my soul. I hope it warms you right up, too.

This chowder will serve you well in chilly weather pair it up with a handful of oyster crackers and a red wine blend. 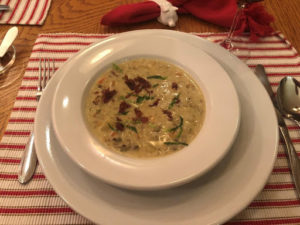 • 2 celery stalks, cut in half length wise and chop fine

In a Dutch oven, cook bacon over medium heat until crisp. Remove to paper towels to drain; set aside. Saute celery, carrot and onion in the drippings until tender. Add garlic; stirring, cook 1 minute longer. Add potatoes, clam juice and pepper. Bring to a boil. Reduce heat; simmer, uncovered, until the potatoes are tender.

In a small bowl, combine flour and 1/2 cup half-and-half until smooth. Gradually add another 1/2 cup, then stir into the soup. Bring to a boil; cook and stir for 1-2 minutes or until thickened.

Crumble the cooked bacon; sprinkle over each serving.