Tabletop gaming in the age of laptops, desktops, tablets and smartphones

When I was growing up, tabletop gaming like “Dungeons & Dragons” was a lot like a trip to Las Vegas: You had a ton of fun with a lot of great people, but you did not talk about it once it was over. It was considered shameful to share in a public setting, for fear that you might be compared to a “nerd.” You know the stereotype: male, awkward, covered with acne and glasses thick enough to deflect bullets. It’s a stupid stereotype, especially in smaller communities like Bonner County. The only thing you need to enjoy a tabletop game is a good group of friends, someone who knows how to play and a healthy amount of imagination. 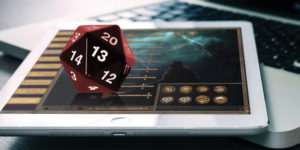 You would think that in an age of information and technology, where it’s easier than ever for us to have more friends we’ve never met in person than ones we went to school with, that tabletop games would die out and be replaced by digital counterparts. As video rules our media and we communicate more by text than our own voices, tabletop games have — surprisingly — never been more popular.

Phone apps such as “Obsidian Portal” can help you take your game to the next level, allowing you to create a lexicon of information for your game with everything from rule sets to entire wiki pages. The website roll20.net allows users to connect with one another from anywhere in the world on any device to play their favorite games and even games they have created themselves. Roll20 even allows users to search for new friends based on interests, or stream their games through platforms like “Youtube” and “Twitch,” to share their adventure with a huge audience, as websites like “Critical Role” and “Geek & Sundry” have done.

In fact, the level of connectivity and inclusivity of tabletop gaming is so high now that there are virtually no boundaries to who can play. As I was researching this article, I found several different stories about people hosting D&D games at senior centers and retirement homes that not only help seniors feel a sense of connection and camaraderie, but also feel totally badass and experience a life they may have secretly wanted their entire life.

The elderly aren’t the only people reaping the benefits of these games; games like “Dungeons & Dragons” are proving to be invaluable to the African-American community as well. Black women have historically been the most oppressed people in America, bearing the brunt of both misogyny and racism. As the article “Why Black Women Should Play More Tabletop RPGs” from blackgirlnerds.com illustrates, tabletop RPGs give women of color a chance to fully and safely express themselves without judgment — a huge step in an arena that predominantly caters to white men.

Tabletop gaming comes in such an immense variety that there is no limitation of interests. “Dungeons & Dragons” alone has an immense library of modules — special campaigns created for certain purposes — that span everything from fantasy to sci-fi to World War II to going to the supermarket. “Warhammer 40,000” takes the idea of the green plastic army soldiers of our youth and turns them into awesome combat-ready collectibles. “Magic: The Gathering”, also known as the tabletop gateway drug, brings a simple-to-learn, difficult-to-master collectible card game to the table with fantasy elements that anyone of any age can enjoy.

If you weren’t happy with how your favorite TV show ended, there are even modules that allow you to play out your dream ending in real time, including those from “Game of Thrones,” “Star Trek,” “Lord of the Rings” and even “The Brady Bunch.”

Some of your favorite celebrities love tabletop games, too. Mike Myers of SNL and “Austin Powers” fame is an avid fan of D&D, as is Stephen Colbert. Curt Schilling, who played in six All-Star games and won three World Series in the MLB is an avid roleplayer and online gaming junkie that has written several articles and reviews for games in recent years. Terry Crews, of “Brooklyn Nine-Nine,” has even participated in a game of “CelebriD&D,” which reportedly hooked him on roleplaying games. Most actors that have participated in these kind of games have said that the experiences make them better actors by teaching them how to be adaptive and connect with their roles.

It should be obvious by now that I’m an avid lover of tabletop gaming. My recent adventures include a daring hostage rescue on a capsizing ship that tragically ended in my death, along with the liberation of a medieval village ravaged by banditry and a wicked ealdorman dabbling in dark magics.

By some miracle, I’ve managed to develop two of my own tabletop games that are nearly ready to market, with another two in development now, so it’s safe to say I know a thing or two about the field. If you’re interested in tabletop gaming, but you’re not sure where to start, drop me a line at [email protected] I am happy to share my wealth of experience and watch one of my favorite pastimes flourish.