My girlfriend absolutely hates them and wishes them all removed from this world, but I have a vastly different outlook. I’m one of those weird guys that, unless I know it’s venomous, will try to scoop it up and drop it outside.

Spiders are an important part of the ecosystem, and you can look at it like this: Would you rather have one creepy spider that just sort of hangs out in the corner, or do you want a total infestation of disease-spreading flies, gnats and roaches crawling all over your walls, counters, dishes and food?

If your answer was “neither,” I can agree with you, but that’s a luxury we can’t afford. The world has bugs, and lots of them. Unfortunately for us, those bugs like to go everywhere, especially our homes when there aren’t many other bugs around.

Spiders help keep infestations in check. They are the silent guardians of your home, whether you like it or not. The only case for killing them is if you know they’re dangerous to the well-being of your family.

Lucky for us, we don’t have a whole lot of spiders in this area that are very dangerous to humans, and the few that we do have are pretty easily identifiable.

Hobo Spiders. They’re weird little guys, with a bite that’s not totally understood by the medical community. It’s believed that their bite can cause necrosis similar to that of a brown recluse’s bite, and it’s fairly universally known that the bite hurts. They aren’t particularly aggressive unless you’re all up in their business, but it’s usually hard to tell where a spider’s business begins and ends.

Hobo spiders are a light brown color with a dark brown abdomen and light chevrons up and down their butt. Usually, you don’t want to get close enough to identify that part of the spider, so if you suspect it might be a Hobo Spider and can see some variation on the tush, it might be a good idea to evict it from your home.

The Brown Recluse. This is the spider that every nightmarish spider you’ve ever fought in video games happens to be modeled after. They are a fairly large spider, some being larger than a penny with slender bodies and long, bent legs. You’ve heard to look for the violin on their abdomen, but this isn’t a definitive means of identifying a recluse. Instead, the eyes are a giveaway. While most spiders have eight eyes, the Brown Recluse has six. 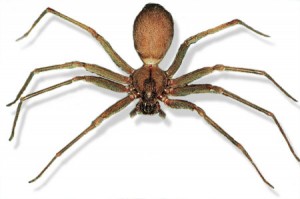 Personally, I don’t want to get close enough to one to gaze dreamily into its eyes while it decides whether or not to bite me on the nose. The Brown Recluse bite is famous for causing necrotic skin lesions and sending people to the hospital. This is caused by a powerful hemotoxin injected by the spider’s fangs when it bites. If hemotoxin sounds terrifying, that’s because it is. It’s designed to damage red blood cells and stop clotting.

Luckily for us, Brown Recluse bites are pretty rare, and necrotic skin lesions only occur about 40 percent of the time. They usually only bite when they’re hiding in our clothes. It’s a horrifying thought, but a quick shake-out before suiting up will usually solve that threat before you have to worry about it.

Black Widows. We don’t really have to worry about them up here. They aren’t normally found in this area, but it’s perfectly possible for them to migrate here from items shipped into the home or bought from a store where the item was shipped from across the country. You don’t even really need me to tell you what a Black Widow looks like. You already know. It’s the spider you think of when someone says the word “Spider”. Inky black, fat, with a deadly little red hourglass on its butt. 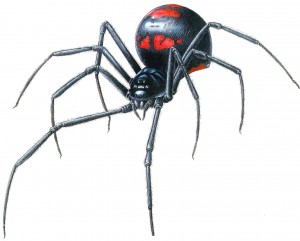 Only the females are dangerous, and despite their claim to fame, they’re more dangerous to their mates than humans. Their bites can cause what is called latrodectism, named after their genus. Latrodectism is pretty nasty. It causes muscle rigidity, vomiting, sweating and pain, though it rarely kills.

You may not know this, but I used to work in a produce department. Random, right? Just wait.

Most people that have worked in departmental retail know that the best-selling item in the nation by a wide margin is bananas. Really random, right? What does this have to do with spiders?

Sometimes, very rarely, the shipments of bananas will carry a fun stowaway from Central America that absolutely no one wants here. 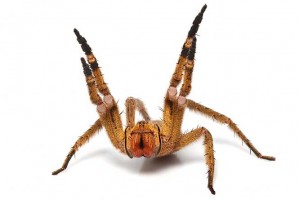 These are huge spiders that like to sit in the palm of your hand, and they’re one of the most venomous spiders in the world. Fortunately for us all, their ability to survive in these climates is pretty poor, and most that sneak in usually don’t survive the brutal process of shipping. Even luckier, one of these particular spiders only happens accurately about seven times out of every 150 sightings, which happens once in every few thousand boxes. Don’t worry, your bananas are safe! Spiders don’t really lay eggs inside of the tips of bananas. That’s just a silly myth.

Speaking of giant spiders, let’s talk about the Golden-Silk Orb Weaver. These spiders are crazy awesome, producing a silk with a unique gold color. They’re extremely colorful, beautiful spiders (though some will argue those two words never belong together) hailing from all over the world. Some variations of these guys have been recorded to reach almost 6 inches across. We’ve even found remarkably well-preserved fossils of a Gold-Silk Orb Weaver’s great, great, great (this will go on for a while…) grand-nanny. If you didn’t know that we have found spider fossils before, you do now! 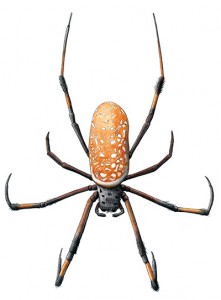 But Brenden, what about those nasty, horrible little things that like to bite me and suck my blood?

I hope I’ve helped convince you to not to crush that harmless little spider curled up in the corner of your house. Wait, who am I kidding? I probably just made your arachnophobia exponentially worse! My bad.