If you were to equate the human body to a computer, our eyes would be a webcam while our brains are all of the stuff inside of the computer’s tower: computer processing unit, random access memory, a cooling system. Without all of the good stuff in the tower, a webcam is a paperweight, just like our eyes are useless without our brain to process the information the eyes receive. 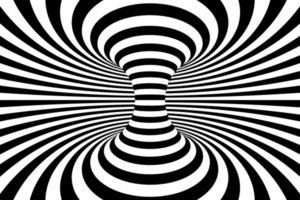 If our brain is a computer, then why do optical illusions exist? What are they, and why do they confuse us so much?

The cones and photoreceptors in our eyeballs receive data in the form of light, similar to how a fiber-optic internet cable operates. The optic nerve attached to the backs of our eyeballs then transfers the raw data to our brain, which the brain decodes and analyzes for trends and patterns, drawing from memory to make correlations and tell us what exactly we’re staring at. This takes an immense amount of energy to complete, so our brain takes shortcuts, which saves precious metabolic energy for tasks like evading predators or figuring out how we can afford a taco dinner special before payday.

The resulting shortcuts are the reason some images trick us into seeing things that aren’t really there, particularly in images with checkerboard patterns and images with sharp contrasts between black and white. These illusions are classified as physiological illusions, and are believed to be influenced by repeatedly triggering basic visual neural receptors in the brain. Though it’s not an illusion, this uses the same part of your brain when staring at a bright object, then closing your eyes to see the same shape in a contrasted color. This also plays heavily into the parts of your brain that process peripheral vision, which will cause color-changing illusions in the edges of your visual field.

Shadows cast on objects can also create optical illusions. Images of shadows cast over checkerboard patterns can make objects appear darker, when their color hasn’t actually changed at all. This plays into an important part of our visual evolution that led us to become apex predators. The ability to discern depth and distance using shadows allowed for us to create and use devastating tools like the bow and arrow and the throwing spear.

Literal illusions are another type of illusion that plays into our ability to recognize patterns, particularly with human faces. Literal illusions have caused tremendous consternation in the comments of social media clickbait challenging viewers to find a hidden object, such as a baby, in the image of a gnarled tree. Some people dig in their heels and go on a “Where’s Waldo?” pixel-by-pixel search while others will find the figure of a baby formed out of the branches right away. Literal illusions are a rarer form of optical illusions, though they captured the inspiration of artists during the early 20th century.

Cognitive illusions have emerged more recently as artists have flourished on the internet, aided by powerful tools like drone photography. These types of illusions are most often seen on floors or as sidewalk art, where artists will make the ground appear as though it’s damaged in some way or that there are walkways to nowhere. Wile E. Coyote drawing a tunnel on a boulder in an attempt to trick the Road Runner was a jab at the absurdity of cognitive illusions (but mostly just making fun of that silly coyote).

Abstract illusion is a form of art inspired by cubism that arose in the early 1900s. It is generally created using simple, staggered geometric patterns that toy with the brain, fooling it into trying to make three-dimensional structures from a two-dimensional image. The tricky thing about abstract illusions is perceiving the distance of the shapes changing as your focus moves about the painting.

Illusions aren’t just tricky (and sometimes annoying), they can actually cause physical illness in some people. Several works of art from the 1950s and 1960s, particularly from Bridget Riley, reportedly caused dizziness and sea sickness in people viewing the paintings. They appear three-dimensional and always appear to be moving, despite the fact that the wavy images on the canvas are completely fixed. This was a major turning point in the artistic community, when it was wholly realized that art wouldn’t just influence thoughts and feelings, but physical wellbeing as well.

Has this article made you want to check out some sweet optical illusions? Spare your computer from exposure to viruses and kick Google to the curb. The Sandpoint and Clark Fork libraries have what you need.

Nestled securely in the Junior Nonfiction section is a treasure trove of optical tomfoolery. It’s 100% free of charge and safe to use, so long as you promise to bring it back.

You can access the library’s website from your computer at home and place a hold on the book or books of your choice — a popular one is “365 Optical Illusions,” by Laure Maj — or you could do what I do and go in and ask the information desk for help.

I used to work there, so they just tell me to find it myself, but I promise the staff will move heaven and Earth to find you what you need.