The importance of choice

Editor’s Note: This Op-Ed was written from two perspectives – that of a mother and a daughter. The daughter McCalee was given up for adoption by her mother McCale, and they both decided to weigh in their opinions on the issue of abortion.

I’m really close with my biological mother, McCale. Since I was born, my parents encouraged an open relationship with her, and I couldn’t be more thankful — that openness has fostered a unique and beautiful relationship not only between her and I, but between all of my families. Nowadays, I get to watch her be mom to my baby brother Arlo. It’s an incredible joy in my life. 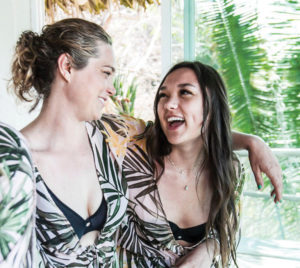 With Brett Kavanaugh’s possible nomination for the Supreme Court and the ensuing hubbub regarding the security of Roe v. Wade as legal precedent, McCale and I thought it was a great time to share our unique perspective on the importance of choice for women.

The other day, we talked about the reasons why she — then 18, the age I am now — didn’t abort me. She tells me that the thought never crossed her mind, and it wasn’t due to some pro-life conviction or fear of hell. She says I was fated to be.

And looking at my life now — my two loving parents, my relationship with McCale and her family, all the people that love me — I think she’s right. My parents Mike and Natalie were fated to be my parents, and I their daughter. McCale was fated to pass me along to them to travel the world and squeeze every last drop of adventure out of life before starting a family of her own.

In my case, McCale’s freedom to choose meant giving birth to me and giving me to my parents. It was a decision she made of her own volition, with her future and well being in mind. A woman’s freedom to make the choices that shape the course of her life, to act autonomously in pursuit of her destiny is an essential human right. Without the right to choose whether or not, and when to have a family, women are inherently unequal.

That’s not to say that McCale’s decision was easy. The more we talk about it, the more I can try to understand the depth of the pain her choice brought, but even then I feel that I’m hardly scratching the surface. But everything happened just as it was supposed to, thanks to McCale’s agency and freedom to choose.

For McCale, the answer was open adoption. For other women, the answer may be abortion. Or parenthood. The essential component is the freedom to pursue whatever option a woman deems best for her health and her life.

If every unwanted, unborn child could be delivered and adopted by a family ready to love them and give them the support they need, by all means I believe that should happen. Unfortunately, it’s not always as straightforward as my situation. Sometimes it can be financially unattainable or unsafe for a woman to carry a child to term. Our adoption system is far from perfect, and there’s a lot more to it than passing off the baby to a set of magical, loving parents. The serendipitous story of my family isn’t a cookie cutter answer for every unwanted pregnancy.

As far as I’m concerned, it wasn’t about me until McCale decided to put me up for adoption. It wasn’t my story yet. My story didn’t begin until I was born. Before then, it was hers — hers to live out freely, without being impeded by mine. It’s an extraordinary privilege to have our stories intertwine so intimately in our lives now, but I firmly believe that her story took priority over mine, a mere unwritten blank slate.

Now of course, my story has evolved into a richly colored tapestry of life, as everyone’s does. But without McCale’s agency to make a decision about what she wanted her life to be, both of our stories wouldn’t be original. The words wouldn’t be ours.

With the freedom to choose, McCale was able to pursue her destiny. And if that sounds dramatic, it’s because it is. It’s the difference between authentically living out your own story, and having it ripped from your hands and written for you.

It never even crossed my mind to have an abortion. I was 18 years old, it was Christmastime during my freshman year of college and I was still with my high-school boyfriend who had stayed behind in our hometown working as a car salesman.

If you drive south from Twin Falls to Magic Mountain there is an eccentric house that transforms an acre lot and trailer home into the epicenter of Christmas joy: twinkling lights on everything, enormous blow-up Santas and reindeer heaving with the air machines that fill them. This particular year, in 2000, they somehow procured camels.  And I remember so clearly the dissonance I felt as I sat in the back of the Suburban borrowed from my parents, stoned to the bone with my high-school besties as they gushed about their new friends and crushes and the life that was beginning to unfold with the freedom of college. And there were lights and camels and this foreboding heaviness because my period had not come, and I could sense something was different in my body. Two days later, in a gas station bathroom, it was confirmed that I was pregnant. And 10 months later in the sweltering heat of August, I gave birth to a beautiful baby girl.

A stern nun did not rush into the operating room and scurry her away as I had always feared. It was an open adoption, after two Lutheran adoption service binders full of what seemed to me people who were obsessed with their pets, I’d found a loving, generous couple in Sandpoint.

I asked that she grow up with music and nature and that I’d hope to know her. My heart was so broken, and every biological urge was grappling with the incongruity that I was not a mother. The milk and hormones that ran my body made me feel I’d made the greatest mistake of my life. I wasn’t a mom, but neither was I a carefree 18-year-old college kid. In the throes of this sadness and confusion, McCalee’s parents invited us to come visit not even a year after she was born. I am forever grateful to that generosity and openness, because 18 years later, our families are extensions of each other, and my biological daughter is truly one of my best friends.

It wasn’t till I was in my 20s that I looked back on that decision and think: why? With other choices, why did I make that one? Did I believe abortion was wrong? So I got a job at Planned Parenthood and saw from the safety of my reception window who decided to terminate their pregnancy. It was everyone: women in their mid-30s in pantsuits, 14-year-olds with their grandmothers, 20-somethings with their boyfriends. Most were pretty emotional, sad and scared, but some were not. Looking at their charts for most, it was their first time, but some had had multiple abortions. There was only one commonality: They all had a choice in deciding their own future.

I do not think abortion is wrong. I know well the miracle of what can happen if you don’t abort and that a fetus will eventually become a beautiful living person. But I also know just how fundamentally your life can be changed. I had the great fortune to have a supportive family and to find an amazingly open-hearted adoptive family. And I tried to live my most adventuresome life traveling, river guiding and exploring to make that sacrifice of motherhood worth it.

If I’d married my car-salesman boyfriend, moved back to my hometown, maybe returned to college eventually, I would be a profoundly different person. This is why choice is imperative, because it is our basic right to choose our own destiny. I did not choose to terminate my pregnancy, and I could never have imagined the beautiful relationship I would have with my daughter. I wish more people considered open adoption. It is our founding principle that we all enjoy life, liberty and the pursuit of happiness.

When government takes away the right for a woman to make choices that fundamentally affect her destiny, we do not fulfill our promise.