Were you aware there is a holiday this month? You can use eggs for this holiday, but it’s not Easter!

It’s Pi Day! (Or Pie Day, for those of us that are dimensionally challenged). Unlike those confusing holidays that fall on a different date every year, Pi Day is constant, and will always fall on March 14 (3.14). 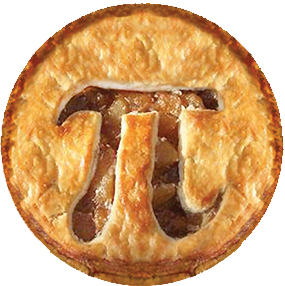 Why is this important at all? What am I even looking at?

It’s the reason your favorite huckleberry pie is a neat circle, why the Earth is round, why your can of root beer is cylindrical and easy to hold.

In the event that you’re still confused, pi is the ratio of a circle’s circumference to its diameter: 3.14~. In other words, you could wrap a circle in its diameter a little over three times, no matter how big the circle is. The circle could be an inch across, or it could be 6 trillion miles across, that ratio is going to stay the same. If it doesn’t stay the same, that shape is no longer a circle.

We can use Pi to calculate the circumference, area and volume of the Earth, or the sun, or even our entire universe.

Pi isn’t a new concept. It’s older than you, me, your grandad or the dirt I sleep on. We have writing going as far back as 1900 BC in ancient Egypt and Babylon where people were trying to figure pi out. They got pretty close, ranging between 3.125 and 3.16, which is pretty impressive when the internet wouldn’t be developed for another 3,900 years.

You can bet Siri was no help to Archimedes, though it’s pretty funny to imagine him going: “Siri, play my jams.” and seeing one of mankind’s greatest minds headbang to some sick lyre and goatskin drum duets.

Pi is pretty unique for another reason: It’s infinite and nonrepeating. That means it never, ever stops and no matter how far back past the decimal you go, it won’t start repeating itself. That means that memorizing pi is a tremendous feat of mental acuity. You shouldn’t be surprised to know that there is actually a world record in place for memorizing pi.

Lu Chao, the current world record holder, recalled and recited Pi to the 67,890th digit past the decimal in 2005. That’s a lot farther than my 5. Can you imagine memorizing and reciting 67,890 of anything in unerring order? Half the time I walk out the door and realize I have two different shoes on.

As you can imagine, in a world where electronics rule and humans drool (usually over delicious tacos.), we’ve made computers do all of the dirty work of pi computation, obsessively seeing how far we can take it past the decimal and remain accurate. You thought that recollection of almost 68,000 was impressive?

In 2016, a computer went over 22 trillion places past the decimal.

That’s not even the impressive part.

It STILL took the computer 105 days to get that far.

If that completely went over your head, let me try to explain what an awesome gaming computer is like in comparison.

An awesome gaming computer has one quad-core processor (as opposed to the total of 72 cores used for calculating Pi) running anywhere north of 3.0 GHz, sometimes two processors.

Anything higher than 32 GB of RAM is sufficient to run most games without a hitch, even on their highest settings. That is an entire order of magnitude lower than the 1.25TB used to calculate Pi. Like a little red wagon racing a Formula One dragster.

You could hold 20 copies of “World of Warcraft” and all of its expansions on a 1TB Hard Drive Disk.

Your microwave uses 800W to make your ramen.

I’d be scared to know how much energy was used over 105 days to calculate Pi.

Pi, and the pursuit of Pi, is truly magical. Not in the gifted by the divine or hidden by a group of faeries sort of way, but in the Houdini sort of way.

At first glance, flinging giant numbers at your face is terrifying and overwhelming and slightly mystical. But the more you look into it, the more you start to understand the mechanics behind it, the more it makes sense, and the more everything it touches starts to make sense.

If you were five feet in front of Houdini when he performed an escape, your first reaction would be awe and wonder, but if you were given an opportunity to come on stage and look at the equipment, the rational side of your mind would go: “Hey, this isn’t magic, it’s just tricky physics!”

Math is no different.

Most of us have struggled with math at one point or another. Math likes to challenge us, and sometimes it likes to challenge us faster than we can understand the challenge. It’s important for us to rebuke defeat. It’s not magic, it’s a function. The more you look at it, the more you play with it and the more you learn about how and why it works, the less mystical math becomes. That’s what pi is all about. Understanding the function of an infinite problem. And also calculating round things.

If you’re struggling with math, or even find yourself a bit rusty, come check out our Pi Day display by the Information Desk! We’ve collected a plethora of books to make math fun, not boring. No judgment! I have to look up almost everything math related for my articles, then double-check to make sure I’m not grossly wrong. (Spoiler alert: I usually am, anyway.)

If you’re bomb-tastic awesome at math, come see us, too. I know Mike is always looking for awesome tutors. You get to share your gift of understanding and make friends in the process.

Plus, it counts as volunteering. Ever been to a library volunteer meeting? We have cookies.

And maybe, in honor of the special day: Pie.