Bonner County is home to an array of hardworking nonprofits that keep their heads down and their doors open, providing essential services to people who find themselves working through some of the most difficult times of their lives. One of those nonprofits is Priest River Ministries Advocates for Women, which commemorates 20 years of service this month — during which it will also help its 14,000th client.

PRMAFW is marking that milestone with a celebration on Thursday, July 28 at the Priest River Event Center (5399 Highway 2) from 5-8:30 p.m. Organizers invite survivor families, supporters, nonprofit partners, law enforcement and the community at large to enjoy hors d’oeuvres, craft mocktails, a silent auction and testimonials that shed light on PRMAFW’s past, present and future, with all proceeds from the auction going to support the women and children who walk through the doors at PRMAFW’s Priest River, Sandpoint and Spirit Lake offices. 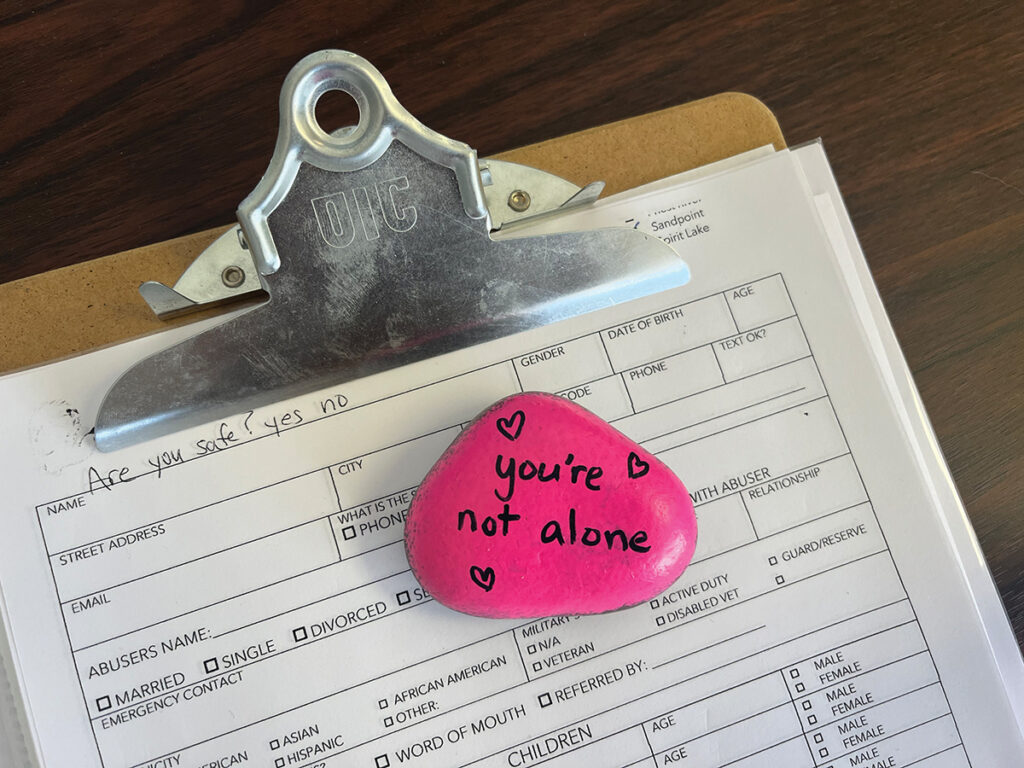 An encouraging paperweight sits atop a stack of forms that women are welcome to fill out upon visiting the Priest River Ministries Advocates for Women office in Sandpoint, located at 808 Lake St. Photo by Lyndsie Kiebert-Carey.

Katie Begalke, an advocate with PRMAFW who is spearheading the event, said it is the organization’s effort to “celebrate alongside and thank all those who have made our 20 years possible.”

“Whether that’s the person who gave us $10 one time or the folks who continually bring in items for our clothing stores or our large grantors who keep our lights on and our staff paid — this event is meant to celebrate all those in our community who make this work possible,” she told the Reader, adding later: “We also want to celebrate with the women and children who have not just survived but thrived after receiving our services.”

PRMAFW began first as a small Bible study run by Priest River woman Rhonda Encinas, who offered an anonymous survey of the group’s women to find out how many had been abused.

“An alarming amount of women in that group had been affected my domestic violence and sexual assault,” Begalke said.

Herself a survivor, Encinas used this knowledge to build a robust network of support for other victims in the North Idaho region. What started as a Bible study has grown over the past two decades into an organization with three offices hosting free clothing closets, a computer lab, paralegal services, counseling, a food program and much more.

Begalke first became familiar with the nonprofit five years ago, when she moved to North Idaho to escape abuse. She utilized PRMAFW services and now works with the organization to help women who find themselves in similar situations.

“It really empowered me not to go back,” she said.

Begalke has been able to experience firsthand the power of having outreach offices across the county.

“It’s amazing how many people will just walk in off the street not knowing necessarily why they’re walking into our offices, but feeling called to,” she said. “Sometimes they’ll talk about needing baby formula, and we’ll give that to them, and then all of the sudden they’ll just open their hearts and tell us about what’s going on at home. Sometimes that leads into further services, and sometimes that’s just a 40-minute conversation that they just needed to have that day.”

While PRMAFW is a faith-based ministry, Begalke said “we don’t care about your race, your religion, your sexual orientation, what you identify as — we just want to help.”

“We have open arms and an open-door policy,” she continued, “so you can come in and share with us whatever is on your mind and on your heart and know that that information isn’t going anywhere.”

As PRMAFW looks toward the next 20 years, Begalke said there is certainly a desire to continue expanding across the county. She said that in rural areas, domestic violence is difficult to navigate because “there’s a lot of isolation that can happen there.”

“They’re always in the car with their abuser, or they’re given 35 minutes — they need to be back by a certain time — so they’re on task, they need to go get … groceries, their haircut, the gas in the car,” she said. “They’re strictly on task, and for them to be able to drive past Priest River Ministries Advocates for Women and see a phone number — that could save their life.” 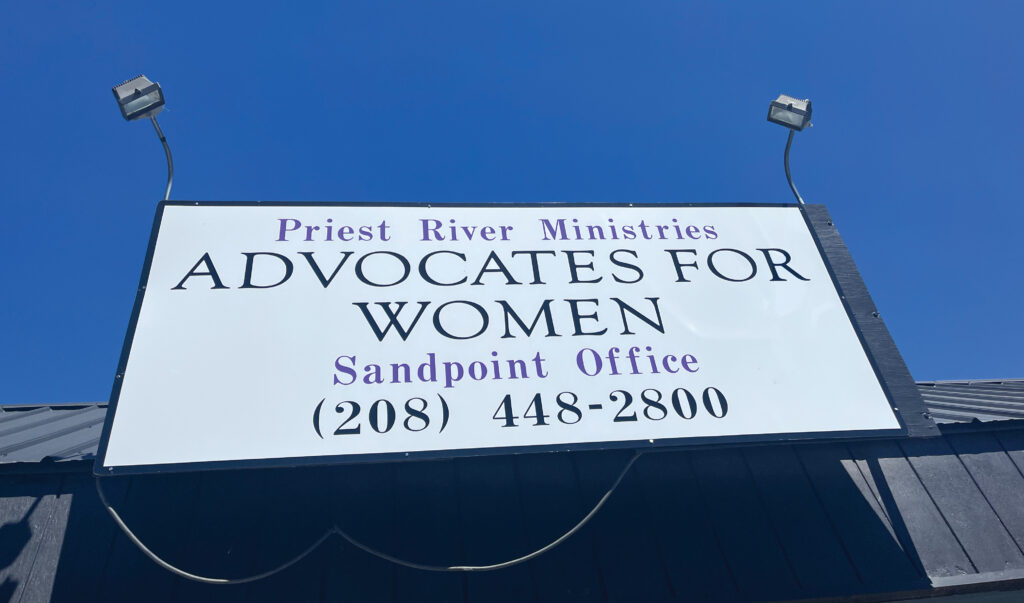 The sign outside PRMAFW’s Sandpoint location. Photo by Lyndsie Kiebert-Carey.

“We get calls consistently for people looking for housing. That’s heartbreaking, because we don’t have a lot of sources we can share with them at this point,” she said. “We know the sources we can share, we just know the outlook. We can send them all these directions, get them signed up for low-income housing, but we just know that everything is booked and full with the current state of where things are at.”

More important than ever, Begalke said, is that the community know PRMAFW is seeking volunteers passionate about furthering the group’s mission.

“The reality … is that this is a 20-year organization and a lot of these [volunteers] are going to be aging out eventually,” she said. “Getting new blood in and being able to engage a new group of volunteers and advocates is going to be essential for us upcoming.”

Encinas is adamant that the story of PRMAFW’s 20 years not be focused on her, but rather the many people who keep the organization going. Still, she shared a little bit about the nonprofit’s humble beginnings with the Reader.

“In July of 2002, God asked me to lead a Bible study group for women who had suffered from or were currently experiencing domestic and sexual violence. That was all,” she wrote in an email. “He put many amazing women in my life from across the country and world who were professors, educators, writers and authors about domestic violence, sexual assault and trafficking. They were doing this work in and out of the church and they wanted to include me and teach me. I had no plan. I just wanted to learn, teach and serve. I kept doing the next thing.”

She said that PRMAFW grew out of the “non-acceptance” of the Bible study group she first launched. It continues to grow, thanks to a collective mindset that acceptance is exactly what will support women and children through difficult times.

“It continues to grow and serve women and children of the Northwest because God puts it on the hearts of men and women in our community to volunteer, support and find ways to assist those in crisis,” Encinas said. “We all just show up.”