There’s a viral video going around this week featuring British actor Joseph Quinn, who has risen to international acclaim this summer thanks to his portrayal of Eddie Munson in Season 4 of the hit Netflix series Stranger Things.

In the video, Quinn sits onstage at a fan convention in London. An audience member approaches the mic and takes the opportunity to thank him.

“I just wanted to say, thank you from all of us — we’re really grateful [for] you sharing the time,” said the fan, identified by various media outlets as Kimberley Burrows. “Thank you for signing our things, spending time with us and making our summer. 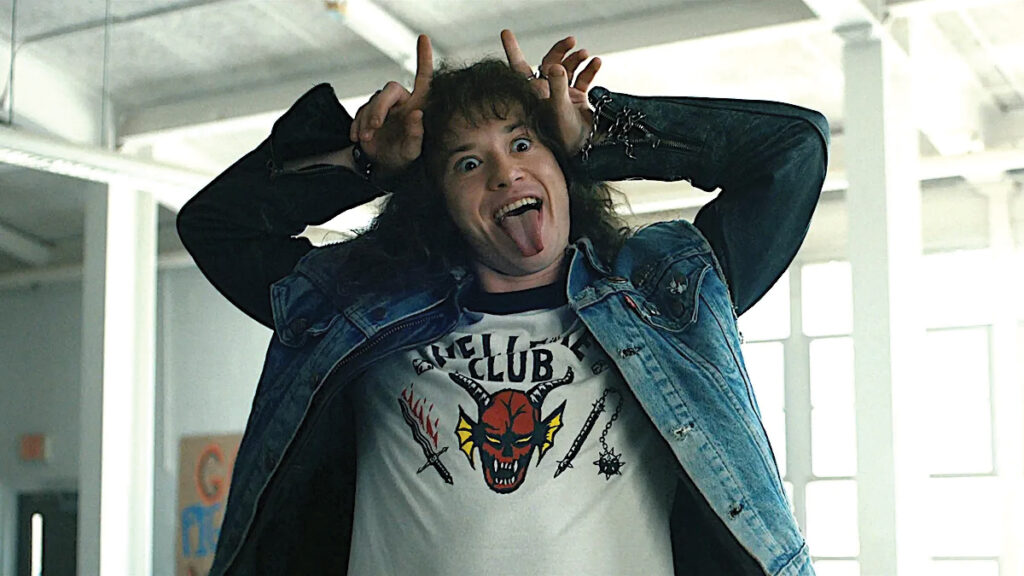 “I think we’ve all connected with Eddie for one reason or another,” she concluded.

Quinn was moved to tears by Burrows’ comment, and thanked her while wiping his eyes.

The video may be going viral in part simply because it shows a sweet moment and a man crying, but I believe the interaction is remarkable because of something even deeper: Eddie Munson is an incredible character, and Burrows spoke for all of us when she thanked Quinn for the obvious care and passion he put into his work.

Is Eddie the main character in Stranger Things? Not even close. Is he the one I’ve been hearing the most about from friends who watched the new season? Absolutely.

For those who are unfamiliar with the show, Stranger Things is based in the 1980s and tells the story of a small, Midwest town plagued by a portal to an alternate dimension, out of which pours all manner of evil that a band of local kids are compelled to fight. Eddie entered Season 4 as the metalhead ringleader of the high school nerds, including some core characters trying to find where they fit in as freshmen. He is intense, funny and uninterested in conforming to social standards. When he gets caught up in the wild life of helping the main characters battle literal monsters, viewers see Eddie rise from defiant goofball to hero, all while staying true to himself.

Munson is a classic example of a supporting character that boasts what todays’ youth might call “main character energy” — that is, the potential to be a powerful protagonist. Here are a few other notable examples:

There is a large school of thought that sees Princess Leia Organa is the real main character of Star Wars. As Nerdist points out: “Leia’s fight for the good of the galaxy started long before A New Hope and never ended. Leia is the first character of the main trio we see in A New Hope, minutes after it begins, literally fighting the Empire.”

Of course, there is no real argument to be had about who the real protagonist of Stars Wars is. For better or worse, it is Leia’s brother Luke Skywalker and, by and large, the franchise is one dominated by male stories. Still, Leia persists in popular culture as a symbol of feminism and just general female badassery, likely due in part to her continued importance to the galaxy’s story and certainly because of Carrie Fisher’s brilliant protrayal.

Of all the quirky characters in the comedy series Parks and Rec, Ron Swanson — played by Nick Offerman — is one that has transcended the Pawnee Parks and Recreation Department to become a king of deadpan quotes and hilarious memes.

The brilliance of Swanson lies squarely in his central contradiction: he is the director of the parks department, while also being so staunchly liberitarian that he opposes any and all levels of government intervention. Details about the man’s deeper personality are revealed haphazardly, such as his unmatched love for breakfast food and his alter-ego as a saxophonist named Duke Silver.

Swanson is a perfect foil for the real main character, Leslie Knope, who is almost insufferably optimistic and chirpy. Without Swanson, it’s safe to say Parks and Rec could never have so fully embedded itself in our pop culture.

There is no research to suggest that Margaret Brown holds any place in the larger social subconscious as the best character in James Cameron’s 19997 film Titanic, but this humble reporter is willing to die on this hill. Based on a real person who escaped the sinking in 1912, Brown plays a very small part in the movie. Still, it’s an important one.

Brown is from “new money,” thanks to her husband striking gold in the American West. The more established aristocrats on the Titanic shun her, including the mother of main character Rose. Brown’s rough-and-tumble demeanor and genuine nature — brought to life by Kathy Bates — make her likable, and her limited actions during the film are powerful nonetheless.

Most recall Brown’s heroism during the final scenes of Titanic, when she advocates for her lifeboat to turn around and search for survivors in the waters of the Atlantic. My love for Brown is cemented much earlier, when she loans her son’s tuxedo to Jack so that he can attend a first-class dinner and be closer to Rose. Without the right clothes, he’d have never made it past the door, and this timeless love story may never have been realized.