The streets were deserted and the sky filled with smoke as we pulled into Bishop, California in late August afternoon. We were hoping for late summer blue skies and perfect conditions. They weren’t.

The flight from Spokane into Burbank and the 250 mile drive into the Sierras was uneventful but we now faced conditions that I had never seen before. The 84,000 acres burned in Sequoia sent ash and smoke billowing over the crest. My lungs began to feel like the third stage smog alerts I remembered from my days growing up in Los Angeles. This was to be my attempt to climb the final summit over 14,000’ in the lower 48 states—number 66. At that altitude the atmosphere can be 40 percent of what it is at sea level which can cause physiological stress. Now, combined with the smoke, we were operating at far less. 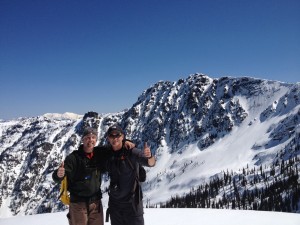 Ken Emerson and I pitched our tents and went to sleep hoping for a miracle the next day. We awakened to see the eastern Sierra in all its glory rising 10,000’ above the desert floor. The sky had cleared as if parted by Moses in some miraculous act. At 14,058’ Split Mountain is a serrated multi-colored giant infamous for the worst trail of all the Sierra peaks. We wound our way through three climate zones—past snakes and prickly pear cactus, through ravines, and up dust chocked scree, past giant fir, and eventually into Red Lake at the base of the peak.  The sky was already filling with smoke again. The winds picked up and by early evening the 30 mile per hour gusts scattered ash and dust into our eyes and in our tents. We slept fitfully and waited for 5:00 am, hoping again the skies would be clear. They were. We had our window.

We gobbled down our freeze-dried breakfast and headed out of the alpine zone donning headlamps and picking our way from one cairn to the next up and over loose talus.As the sun rose we could see the smoke-filled Owen’s Valley. We were now in the glacial moraine climbing directly below the North Face of Split. We reached the high saddle, a sharp ridge separating the crest, and began ascending the northeast ridge. This funneled into a ten foot wide opening that spilled out to the western slopes. We were now just 800’ below the summit. Only then did it dawn on me how close I was to finishing a goal that had once seemed impossible and implausible.

Most people climb for the challenge, the risk, and the sheer pleasure—conquering oneself as much as an inanimate object.Climber Ed Viesturs sums this up; “We climb these peaks because we love them, we love the places they take us, and we love the process of learning about ourselves along the way.” 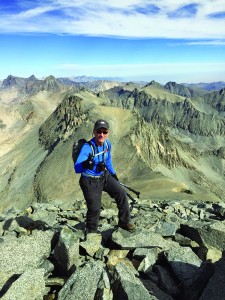 As I made the last 100’ feet toward the summit I felt an odd mixture of relief and emotion. Until then I had kept these carefully stuffed beneath the surface. Now, there was no more vertical to climb. No more steps. Ken and I gave a long hug, my eyes filled with tears—the journey was over.

In “Man’s Search for Meaning,” Viktor Frankl writes “A person finds meaning by striving and struggling for a worthwhile goal, a chosen task  . . . painful or dangerous experiences often transform the people who survive them.”

And this was a form of survival—more than 700 miles of trails and nearly 300,000 vertical feet. The journey included two falls in the Rockies, one trip to the ER for stitches, an unexpected bivouac at 13,000’, and 16 different partners. And Ken had risen to the occasion as my partner in suffering and adventure—doing four 14,000’ peaks with me in the final month.

We find our greatest satisfaction from experiences, especially those that seem difficult or even impossible. Many of us surrender before we start because we cannot see the end—the elusiveness of a summit. I have stood at trailheads looking at a peak far in the distance. But we succeed one step at a time, one challenge at a time, and one peak at a time—methodically persevering, overcoming fear, the elements, finding our way in the dark to places we’ve never been, unsure about what’s to come. Or, as famed mountaineer Royal Robbins wrote, “The mountains we conquer are not those on the horizon: supreme, cold, taunting, but rather those within us: of fear, weakness, and ignorance. We need adventure. It’s in our blood.”

Unlike Split Mountain, my final summit in the Rockies was on a cold but sunny September morning in 2012. I left the Rock of Ages trailhead outside of Telluride, Colorado—walking alone, groping in the darkness, quiet in my thoughts but keenly aware of any rustling in the forest. There is something about being alone on a trail that heightens one’s senses and produces a greater awareness of the risks involved. This was one of those times.

Ranked one of the top six peaks in difficulty, Mt. Wilson stands out as a jagged sentinel in the San Juan Mountains. By noon I was just under the summit and the 200’ cliff separating me from the top looked intimidating. But we learn to focus on what’s in front of us—methodically, carefully, intentionally—blocking out the “what-ifs” and stuffing the fear somewhere in the recesses of our mind. After summiting Mt. Wilson I soon packed to leave Colorado and return to Sandpoint after a five year hiatus; grateful to be back in that cleft between the Selkirk and Cabinet Mountains.

To live life without risk, without danger, challenge, or adventure is not to live as our Creator designed us—boldly, daringly, and passionately. For life is short and the adventures endless. And new ones are always beckoning us to embrace the existential distress that makes living far more rewarding.