Home away from home

Inside Sandpoint’s newest hangout The Longshot

Stepping into The Longshot cafe feels a bit like stepping outside of Sandpoint — in a good way. Though located in the former Wrenco Arms buildings on the busy corner of Pine Street and Boyer Avenue, a stone’s throw from the bustle of Highway 2, the interior is a world apart: huge old-school roll maps of the United States, Europe and Australia hang from the walls, interspersed with vintage mountain scenes that look taken the pages of a mid-century outdoors magazine. 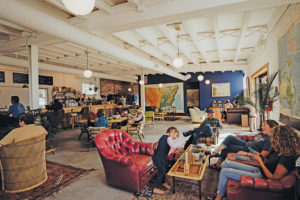 The interior layout of The Longshot. Photo by Racheal Baker.

Long story short: The Longshot, which features Understory coffee and tea, would fit nicely on Alberta Street in Portland or Fremont in Seattle. (Bonus: you can shop for flannel shirts, trendy winter coats and assorted hats, mugs, branded koozies, bowls, chairs, even a vintage mod fireplace — many gleaned by the owners at estate sales — at the end of the bar).

Again: Sitting in one of its rattan chairs or cozied in a burgundy-hued leather lounger, it’s easy to forget you’re at the corner of Pine and Boyer.

Meticulously and lovingly curated as the interior is, the same could be said for the food and drink.

Open 7 a.m.-9 p.m. Monday, Wednesday and Thursday; 7 a.m.-11 p.m. Friday-Sunday; and closed on Tuesdays, The Longshot calls itself an “all day cafe” with breakfast fare on order until 3 p.m. followed by lunch and dinner snacks, including hot and cold sandwiches, salads, and “little” and “big” charcuterie options, alongside natural wine, beer and a range of non-alcoholic beverages, many of them handcrafted.

On a rainy recent Wednesday morning we ordered the pesto, avocado and egg toast ($8.50) and lavender latte ($4.25). Though toast as a dish is sometimes derided as haute-hipster cuisine, there’s something deeply pleasing about a perfectly crisped slab of bread piled with a schmear of zesty pesto, supple avocado, punchy arugula and a boiled egg sliced and seasoned with salt, pepper and paprika. A toast to this toast: It maintains its structural integrity despite the generosity of its toppings. What’s more, it’s a perfectly filling mid-morning snack.

As for the latte, we were surprised by how it managed to be both robust and delicate without succumbing to the sickly sweetness suffered by so many other cuppas of the type. Most pleasing was the lingering lavender aftertaste, enriched with the nutty depth of Understory’s beans. Full disclosure: We are not latte drinkers by nature, but the notion of a lavender latte lured us in. We were not disappointed.

Opened in late August, The Longshot has already cornered the market with a dedicated corps of customers who come for the pleasing vibe and stay for the top-notch vittles — a combination that another patron characterized as something more than a mere coffee shop, “I’d call it a day lounge,” he said.

We concur, and would add any day spent at this home away from home is a day well spent.