Pure story telling, outside the realm of politics and other such folly, is a rare commodity these days. Yet I’m sure there were times in our lives when all of us cherished being caught up in the spinning of a good yarn. Every now and then, the stories change us, and there are some we pass from generation to generation lest they be forgotten. I think that a good story, told sincerely, can give you a sense of warmth. Nostalgia. A lesson learned, or hope given. 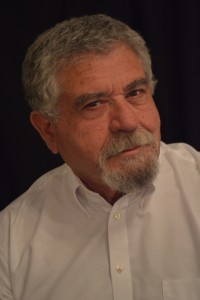 This weekend at the Panida, we’ll all have an opportunity to recapture some of that storytelling magic when “Nostalgic WWII Adventure with a Little Romance” plays Saturday and Sunday at the Little Panida Theater/Panida Playhouse, featuring local theater legend Ron Ragone.

“I think storytelling is a lost art,” said Patricia Walker, Panida executive director. “I was delighted to have it booked into the Panida.”

“I’m grateful for the opportunity to have a fundraising event, and the Ragones were kind enough to make it happen for us,” she added. “They paid for the posters, Patti is running the projector, doing the music, videos, everything. It’s truly a family benefit for the Panida … and Ron and Patti are a large part of our Panida family.”

“I do know that the Little Panida/Panida Playhouse can use some help, and this theater, this little black box theater, can provide some truly high quality entertainment for this community,” said Ragone.

Ron, who also contributes as a substitute teacher in our local schools, had the opportunity to hone his storytelling skills while on the job.

“He told his students, ‘Give me 45 minutes of good hard work, and I’ll give you 15 minutes of a story,’” said Patricia Ragone, local artist and Ron’s wife. His students just ate it up.

A longtime theater stalwart, Ragone is a master storyteller, with a soothing, engaging voice and talent. He appreciates and understands the relaying of stories.

“I have several stories tucked into my brain that I’ve accumulated over the years,” Ragone said. “I have three of them that I think would be particularly good that revolve around World War II. We’re supplementing the stories with some great visuals, music and audio.”

That, indeed, makes it more than just an old-fashioned fire side chat.

“They’re not about World War II per se,” he continued. “They just talk about how people were affected by the war and how it changed peoples lives. One of the stories comes from Patti’s uncle, an actual war time experience that he had. It’s his story. I don’t deviate from it. They’re heart-warming stories. They are life-changing stories that occurred to the protagonists in all three stories. They’re stories I’ve honed over the last 40 years.”

Another aspect of this event is the matinee Sunday show. What used to be a staple of theater has pretty much gone by the wayside. Ron is making an effort to aid in the comeback. The Sunday matinee was scheduled to allow more people the opportunity to see the show.

“The matinee was set, in a large part, so the assisted living folks and the senior community could have a real opportunity to come see this,” said Walker.

Ragone is gambling it will pay off for the Panida and hold something special for those who attend.

“With this particular story, dealing with a peoples that are now ‘up in age,’ there might have been some sentimental value with the time of these stories happening,” he said. “We thought a Sunday matinee might have some special place in the heart for those people.”

“I hope you come to see this,” said Ragone, “and again, remember, the chief benefactor is going to be the Panida Theater. I’m just offering what little talent I may have … oh, nonsense. I’m a good storyteller. I really am.”

Folks, he really is. I’ll be there, and I’m also considering bringing along some comfortable slippers and maybe an Irish Coffee to get the full effect. No doubt I’ll remember years from now.

Catch “A Nostaligic WW II Adventure with a Little Romance” 7:30 p.m. Saturday, Sept. 12 and 3 p.m. Sunday, Sept. 13 at the Little Theater. Tickets are $6 and available at www.panida.org, Pend Oreille Arts Council and at the door. All proceeds go to the Panida Theater.