Litehouse Foods’ expanded Ella facility is open for business, and the community is already benefiting from its increased capabilities. 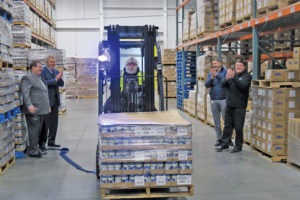 Litehouse officials applaud after a forklift drives through and cuts the ribbon at the newly expanded Ella facility. Photo by Cameron Rasmusson.

At a $6.2 million price tag, the expansion was no small project. But the increased efficiency it brings helps pave the way for the company’s future growth. Among the improvements are a new cooler, shipping and receiving center, loading dock and a wastewater treatment facility. The plant also features a new employee services area. According to Litehouse president and CEO Jim Frank, the development is a sign of Litehouse’s commitment to remaining headquartered locally.

“We intend to keep a big presence here in Sandpoint,” he said.

The facility expansion allows for new efficiency in both big and small ways. The new loading dock, for instance, is on the same level as Litehouse’s fleet of trucks, so pallets of Litehouse products can be loaded directly into truck beds for shipping, Frank said. Likewise, with the new cooler room in place, the company can expand its production operations into the old cooler room.

At a ribbon-cutting ceremony Wednesday, Frank thanked both city and county officials for supporting the project and the facility neighbors for tolerating the bustle of construction. He also expressed appreciation for facility employees, who endured inconveniences throughout the renovation.

“If you’ve ever had to remodel your house and do dishes in your bathtub, this was a little like that,” Frank said.

The ceremony was focused on both Litehouse Food’s past and its future. Company founders Doug and Edward Hawkins were present as Frank recalled Litehouse’s first expansion in 1977, when the brothers outgrew their kitchen and set up operations in a remodeled autobody shop.

More than 40 years later, Litehouse is an ongoing Sandpoint success story. The company has more than 1,000 employees nationwide, with 427 of them located in Sandpoint. The expanded Ella facility added 49 full-time employees to the Litehouse family, in addition to new seasonal and office jobs. For the past five years, the company has enjoyed annual double-digit growth, during which time it expanded its production capabilities in Utah and Michigan facilities.

Litehouse announced its Ella facility expansion in 2016, when the Bonner County Board of Commissioners agreed to work with the company on a tax deferment plan. Local officials are excited by the economic vitality Litehouse’s projected growth promises for the region.