Idaho’s contribution to the nationwide surge of COVID-19 cases is continuing unabated, with the state tallying 1,310 more confirmed and probable cases on Nov. 18 alone, also adding 14 deaths for a total of 812 since pandemic tracking began in the spring. 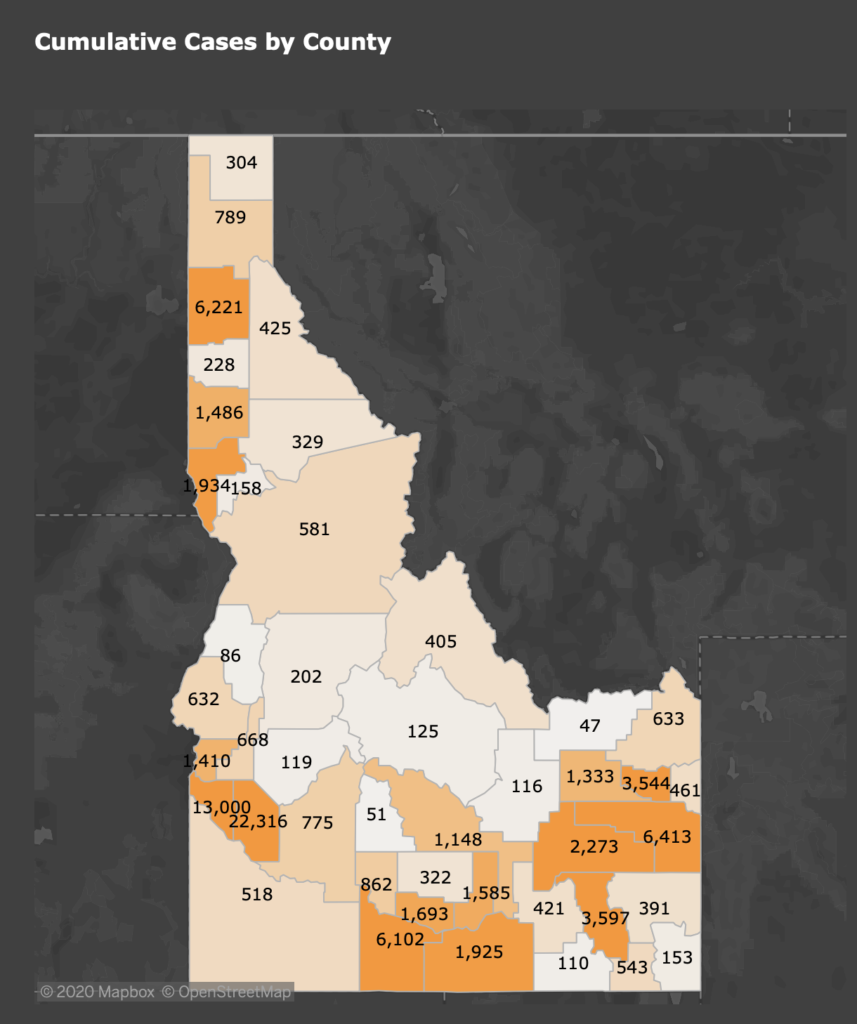 A map of cumulative positive COVID-19 cases in Idaho counties as of Nov. 18. Courtesy Idaho Dept. of Health and Welfare.

The Panhandle Health District reported 201 active cases on Nov. 18, down from 204 the day before and the third highest since tracking began in March. The peak, so far, was Nov. 9, when the district — which covers the five northernmost counties — logged 209 active cases.

Bonner County reported 22 new active cases on Nov. 18, down from the all-time high of 36 recorded on Nov. 14. A total of 94 people have died district-wide from confirmed COVID-19 related illness since tracking began, including four in Bonner County.

Looking nationally, “the virus is winning,” according to Maryland Republican Gov. Larry Hogan who, according to The Washington Post on Nov. 17, reinstated his state’s COVID-19 restrictions amid increases in community spread. Total deaths in the country topped 250,000 and 11 million cases in the U.S. this month. The nation added 1 million confirmed cases from Nov. 9 to Nov. 15 alone.

Little announced Nov. 14 that the state would jump back two whole categories from Stage 4 to Stage 2 of the “Idaho Rebounds” plan. That means private and public gatherings are again limited to 10 people and individuals are strongly encouraged not to unnecessarily mix with those outside their own household. Unlike the “lockdown” imposed by Little’s initial “Stay Healthy Order” during the onset of the pandemic in the spring, bars, nightclubs, restaurants, and religious and educational institutions — among others — are allowed to remain open provided they abide by social distancing and limited occupancy guidelines.

As has long been his policy, Little shied away from any further statewide requirements, including a mask mandate, even as Idaho’s surrounding states have adopted such measures. Meanwhile, he authorized the deployment of 100 members of the Idaho National Guard to assist medical facilities that have been swamped by the influx of COVID-19 cases.

The same day as Little’s announcement reverting the state to Stage 2, Bonner General Health moved into “contingency mode” to handle the spike in individuals needing care.

“We have seen the number of total positive tests double in the last few weeks, and the pandemic  is slated only to get worse,” Emergency Department Physician Dr. Stacy Good stated in a news release.

The 25-bed critical access hospital has sequestered five of its medical-surgical rooms for COVID-positive patients and three rooms in the critical care unit.

“The rise in COVID-19 transmission has created other issues, including delays in COVID-19 test result notification and contact tracing,” the hospital stated. “If the spread of the virus continues to  increase in Bonner and Boundary counties, we will not be able to care for those who are acutely  ill without postponing essential but less urgent care. We anticipate this kind of shift could happen  in a matter of weeks if trends do not change.”

According to Panhandle Health District, Bonner, Boundary, Kootenai and Shoshone counties are all in the “red” category. Benewah County is in “orange.”

While many Idahoans have blamed out-of-state visitors for spreading the virus in the state, Boise State Public Radio on Nov. 13 reported that hospitals in Idaho’s neighboring states have been picking up the slack for overtaxed Gem State health facilities. The Washington Hospital Association in a recent survey found that as many as 60% of the patients in Newport, Wash. are Idahoans, while Spokane hospitals have also been receiving Idaho patients — one reported seeing a 20% increase in beds taken by Idahoans.

According to the BSPR report, Washington Hospital Association CEO Cassie Sauer said health care workers in her state are disturbed and “frustrated” that Idaho is refusing “to adhere to science and wearing their masks.”

“We have huge concerns about them,” Sauer said, quoted by BSPR. “We’re going to be strained to take care of our own residents.”

At the Sandpoint City Council meeting Nov. 18, Councilwoman Deb Ruehle issued an impassioned plea to fellow leaders to stop treating mask wearing a kind of “Super Bowl” sports match, in which teams battle one another over partisan points while “our regional hospitals are being overrun.”

“People have proven that they are not socially responsible,” said Ruehle, who earlier in the fall fronted a proposal to give Mayor Shelby Rognstad power to authorize a mask mandate, but was met with robust protest by anti-mask citizens and failed on a 2-4 council vote.

“I am profoundly disappointed in the lack of social responsibility and leadership displayed by this council,” she said. “I implore you, my fellow council members to be leaders.”

Ruehle asked for and received five minutes of silence to recognize the deaths that have resulted from COVID-19 — noting that “they’re not just numbers or data; they’re people, families.”