I’m home. Feels good to be back, and it feels like fall’s found her way back here, too. I’ve gleaned the garden and, let me tell you, that didn’t take very damn long. It’s too bad none of the grandbabes are here because my harvest was the perfect size for a small dinner party set in a dollhouse. Out of 72 Jif pots and an assortment of starts from the Farmer’s Market (including my second set of tomato plants, after the first set shivered to death in the May frost), my paltry yield was an embarrassment.

Even though the tomato plants were huge, I was hard-pressed to find more than a couple of tomatoes per plant. So that’s it. Pulling up (tomato) stakes and taking my gardening loss(es).  My 15-month-old granddaughter, Runa, has command of a new word, which she uses liberally: “done!” Me, too, Runa. I’m so done growing vegetables. Done!

I spent last week in Spokane on standby for myriad grandbabe duties, while the parents settled into new jobs, day care and preschool intros, and all the other overwhelming tasks that come with a cross-country move. Before I left, I rewarded my tired self with a fabulous dinner at Churchill’s Steakhouse. I hadn’t been there since pre-COVID days and wasn’t sure what to expect, and it was even more extraordinary than I remembered. I love a good steak and I especially love the atmosphere of an old Chicago-style steakhouse. 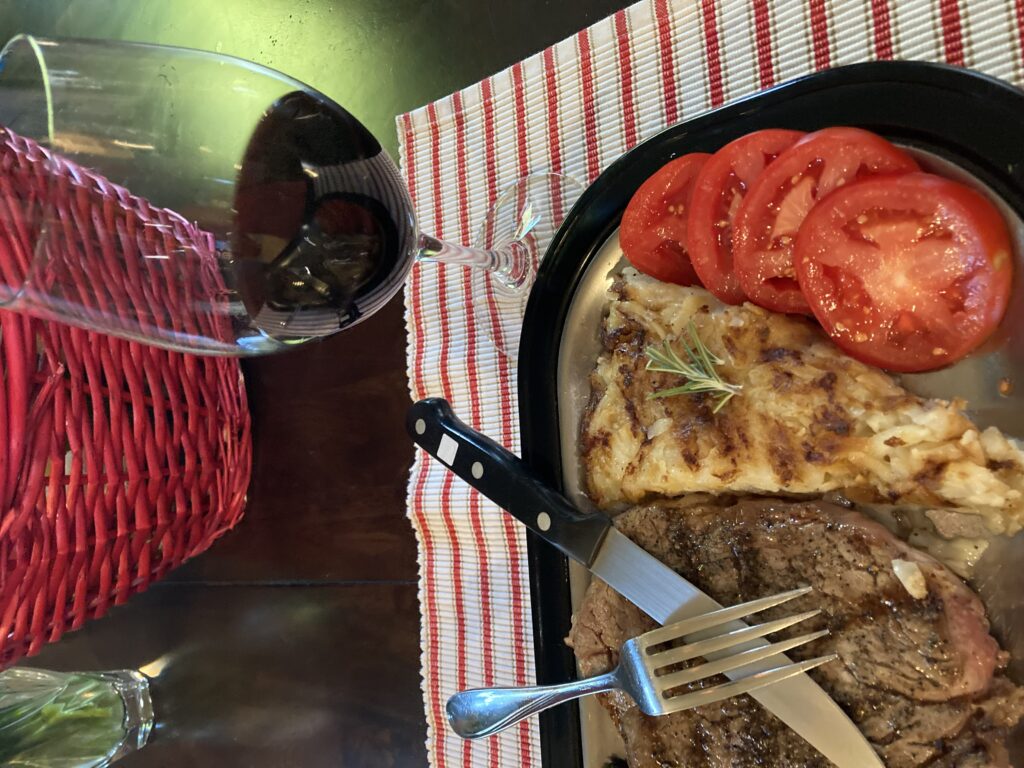 Even though Churchill’s hasn’t been around that long (since 2009), it feels decidedly older, like the ones I favored from my past travel (and expense account) days. I love the atmosphere of dimmed lights, rich mahogany paneling and deep banquettes swathed in red velvet. Per past preference, I sat at the bar and, between bites of an expertly prepared, rare-cooked ribeye, I bantered with Zach, the well-practiced bartender.

In the heyday of my private-train career, I was often on the road up to 100 nights a year. I avoided chain restaurants whenever possible, and my most pleasurable activity was seeking out the oldest local, independent steakhouse. I was rarely disappointed.

Still among my favorite steakhouses are Durant’s in Phoenix, where you gain entry through the large, busy kitchen; Gallagher’s in Manhattan, with their oversized glass-encased meat locker entrance; and Hugo’s Cellar in Las Vegas, where ladies are presented with a long-stemmed red rose before being seated.

I used to spend multiple days at a time on train layovers (with a generous per diem) in Chicago, so I’ve got more than a few favorites there. Gene & Georgetti, where the longtime waiters are as well-seasoned as the steaks, and the Chicago Chop House, just off the Magnificent Mile, rank at the top of my list.

When I long ago began to seek out these iconic restaurants, the steaks were usually accompanied by a crisp salad and a side or two that included a potato offering, which, more often than not, was the proverbial Idaho baked potato. Occasionally, you’d find a more upscale spud, such as the Lyonnaise potatoes offered at Gallagher’s in New York.

I spent three (long) nights in Rhinelander, Wis., in 1995 to inspect a galley/dining railcar for a long-term lease. I can’t remember the car or its configuration, but I can still remember the Swiss-style steakhouse — The White Stag Inn — with its open hearth and the melt-in-your-mouth potato offering, called rösti (now a favorite side on my steak platter).

In the past year and a half, I’ve rarely stepped out for a meal and, when I have, it’s mostly been outdoors. I don’t consider myself a food snob and love my favorite hometown haunts. Still, after dining at Churchill’s, I’ve come to realize how much I miss those fine-dining experiences, where bustling waiters push linen-covered carts to prepare tableside Caesar salads and steak Diane. I also miss the people watching part of the experience, like observing a haughtily dressed sommelier upselling a bottle of Opus One to an elegantly dressed gentleman and his bejeweled date.

I’m not sure when my schedule (and budget) will allow me to return to Churchill’s, but with my two youngest adorables residing in Spokane, I suspect it won’t be long. I might even recommend that Churchill’s add rösti to its menu of sides. Of course, I also recommend you add it to yours. 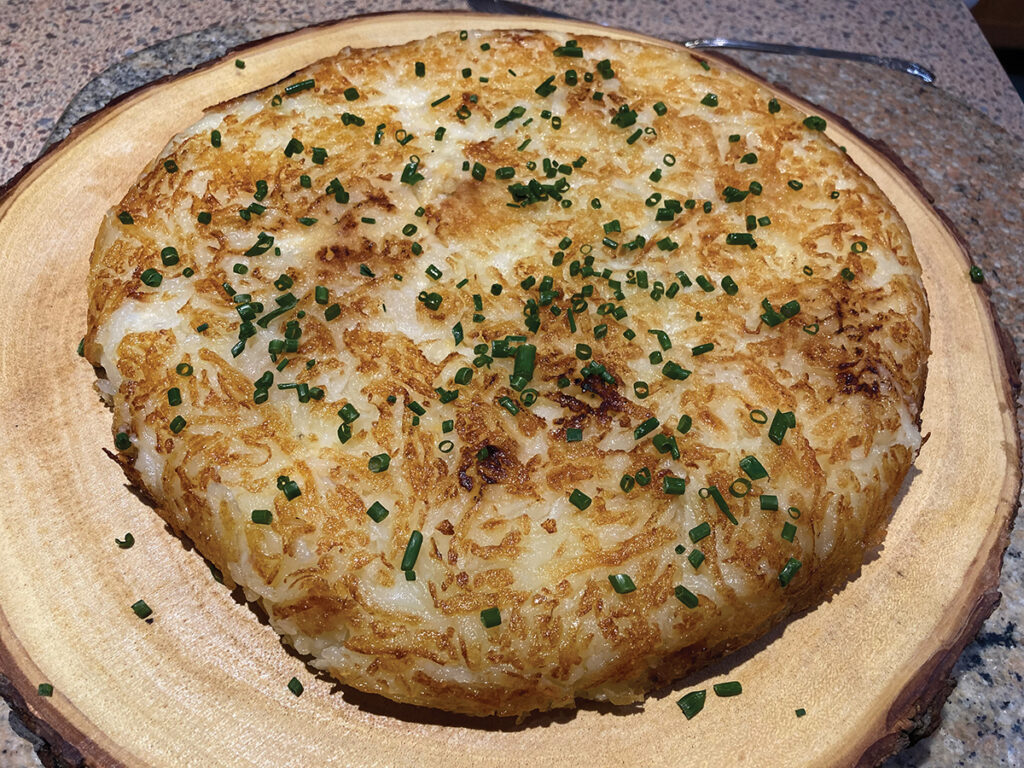 This is a delicious and fairly simple Swiss side dish that can be served with any meal. Boil the potatoes a day ahead. Once the ingredients are in the pan, be sure not to stir or it won’t form its signature crust. For variety, add crumbled, crisp-cooked bacon, cooled sautéed onions, or peeled and grated apples (delicious with pork). Makes six servings.

Place the potatoes in a large pot. Cover the potatoes with water. Bring the water to a boil over medium-high heat. Cook the potatoes until just tender, about 15 minutes; drain and refrigerate potatoes overnight.

Peel and grate the chilled potatoes into a large bowl. Grate cheese in another small bowl.

Melt the butter in a skillet over medium heat; add half the grated potatoes (mixed with the bacon, onions or apple), half the cheese, season with salt and white pepper, repeat with remaining potatoes and cheese. With a spatula, press the potatoes into a compacted round disc. Sprinkle the cream over everything. Cover the skillet with a lid. When the potatoes begin to sizzle and a brown crust has formed on the bottom, cover the skillet with a large plate (I use the bottom of a springform pan) and flip the rösti, then slide back into the frying pan to crisp that side. When done, slide onto a serving platter and garnish with chives and cut into wedges.